The Top 10 Orphan Brand Muscle Cars of All Time

The first muscle car era is looked upon fondly by both gearheads who lived through it and those of us who came along after it. Consequently, Detroit has spent much of the last decade catering to that nostalgia, bringing out a buffet of increasingly appetizing street scorchers with names and shapes that pay tribute to the old guard, but with mixes of performance, reliability, efficiency and overall user friendliness that folks back in the day, even in the trippiest burning rubber and leaded 100-octane fume fueled fever dream, couldn’t have possibly imagined.

Sadly, not all the big names from the glory days are still with us. The car biz truly is survival of the fittest, and many former muscle car making marques have fallen victim to this Darwinist process over the last 50 years. These ex-brands and the cars they made are frequently referred to as orphans, but unless the industrial powers of the BRIC nations develop a sudden random craving for 1960s Americana and are able to make deals with the current trademark holders, they ain’t getting adopted. Here then, are 10 make and model combinations that have found eternal rest at the Great Auto Show in the Sky. 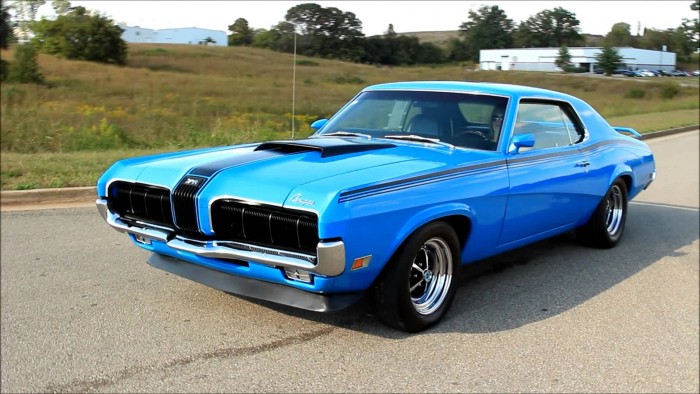 Although the Mercury Cougar was originally intended to be the Ford Mustang’s suave, more mature big brother, it wasn’t long after its fall 1966 arrival as a ’67 model that it started behaving like a hooligan. The 1968 model year saw a pair of 7.0L V8s (a 427 cubic-inch and a 428 cubic-inch) added to the option list, while the following year saw the debut of the Eliminator package. Besides having a kickass name, the Eliminator served up a blacked-out grille, rear wing, stripes, sport suspension, interior upgrades, an optional functional hood scoop and, if you wanted a small block screamer under that hood, the Mustang’s Boss 302 V8. Aside from some minor styling revisions, it was more of the same in 1970, which would prove to be the Cougar Eliminator’s swansong as market forces started pushing the nameplate away from performance and toward luxury. 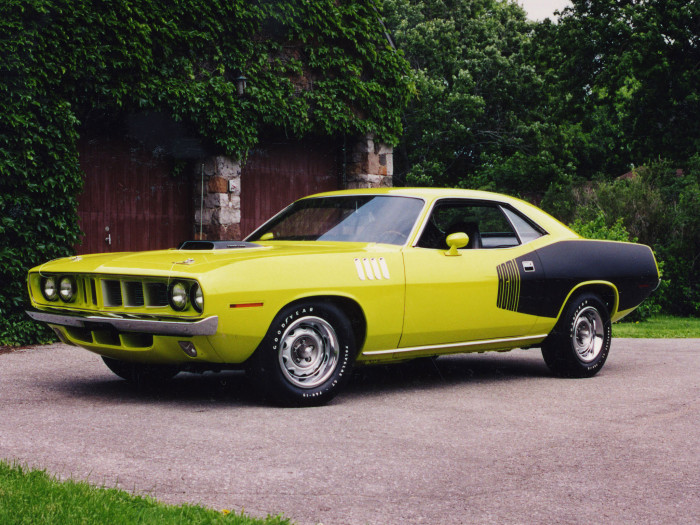 Although the Mustang is widely credited with launching the “pony car” segment, the Plymouth Barracuda – a fastback, bubble-back-window variant of the humble Valiant – actually debuted a couple weeks earlier. (Granted, we can see why people would be averse to calling it the “fish car” segment…) The first-generation Barracuda looked sporty, but the top-of-the-line 273 cubic-inch (4.5L) V8 could only do so much. The second-gen car, while still very much a Valiant in a tailored suit, did away with the muscle deficit via a new top engine, the 383 cubic-inch (6.3L) B-series V8 found in the 1967 and ’68 BarracudaFormula S. The 1969 lineup saw even more oomph with the birth of the ‘Cuda sub-model, which could be had with Chrysler’s 440 cubic-inch (7.2L) RB engine.

And for 1970, the third-generation Barracuda and ‘Cuda bowed on a brand new platform shared with their new Dodge cousin, the Challenger. The big news then was that, for the first time on a standard production ‘Cuda, you could get the mighty 426 cubic-inch (7.0L) Hemi V8 generating 425 horsepower *cough*BULLSH-T*cough*DELIBERATELYUNDERRATED*hack*. Sadly, the monster motor party would only last one year after that, as the Hemi, 440 and 383 were all gone come ’72, just as the Barracuda itself would be after 1974. 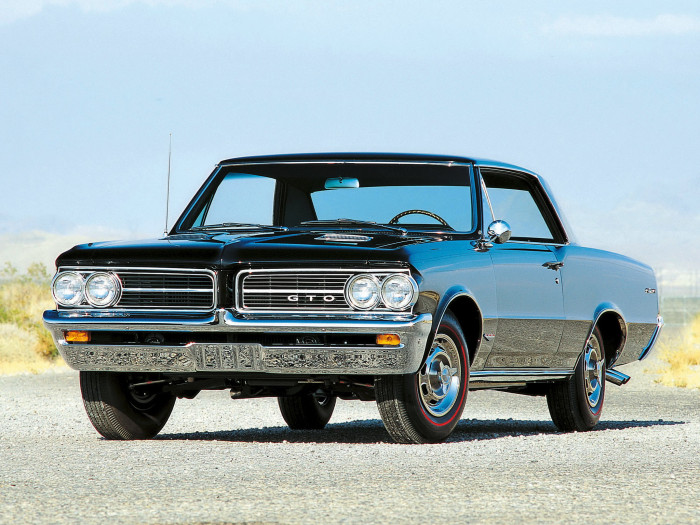 The story of the Pontiac GTO’s origin is the stuff of automotive legend: A gaggle of Pontiac executives (led by John DeLorean) wanted to create a high performance version of the mid-size Tempest. General Motors corporate policy at the time forbade putting big displacement (specifically, larger than 330 cubic-inches or 5.4L) engines in mid-size cars. DeLorean and crew got around the ban by positioning the GTO and its 389 cubic-inch (6.4L) V8 as an option package. Car is a smash hit with horsepower-hungry Baby Boomers, corporate sees dollar signs and raises the engine size restriction, becomes a standalone model for its sophomore year (1965), the rest is history.

But as interesting as the GTO’s backstory is, the car itself commands attention, too. Engines grew bigger (peaking at 455 cubic-inchesor 7.5L) and the styling more extroverted (particularly with The Judge appearance package, which debuted in 1969) before the nameplate faded away during the first muscle car mass extinction in 1974 after a one-and-done appearance as an option package for the Chevrolet Nova derived Ventura. Thirty years later, it returned for a three-year engagement as an Americanized version of the Australian-made Holden Monaro, and while some derided it for having snoozer looks, no one could argue that its capabilities (particularly the 400 horsepower 2005 and ’06 versions) were unworthy of the celebrated originals. 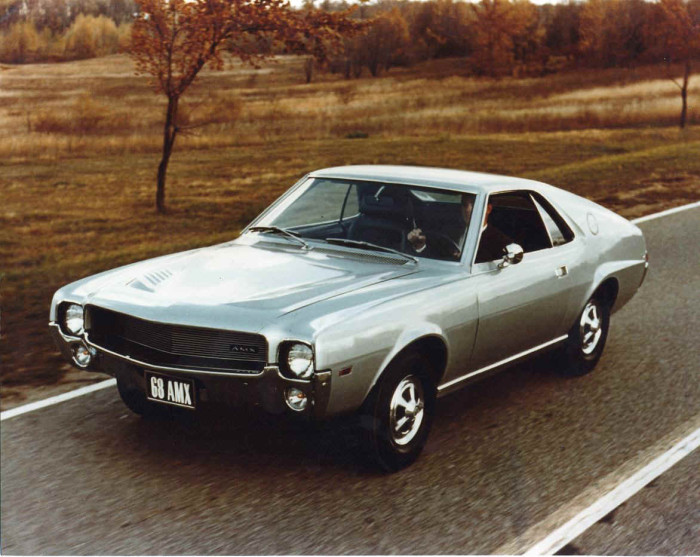 In the late 1960s, AMC wanted a 2-seat sports car to snatch a few sales away from the Chevrolet Corvette but, as was usually the case with the Last of the Independents, the budget for a dedicated platform wasn’t there. Instead, design chief Dick Teague and his team sliced exactly one foot out of the wheelbase of the company’s Mustang/Camaro/Barracuda fighter, the Javelin, to create the AMX (short for American Motors Experimental).

Both the Javelin and AMX debuted as 1968 models, but the latter’s status as a standalone offering would only last two more years before being rebranded as a trim package for the former (and subsequently the Hornet and, after that, the Spirit). The two-place AMX didn’t really resonate with buyers, despite being one inch shorter in wheelbase than the Corvette and being available with up to 340 horsepower from AMC’s 390 cubic-inch (6.4L) V8. However, it wouldn’t be the last time an automaker truncated the wheelbase of one of its products to create an even sportier machine: Audi and Honda would do it to great effect in the 1980s with the Quattro-based Sport Quattro and Civic-based CR-X, respectively. 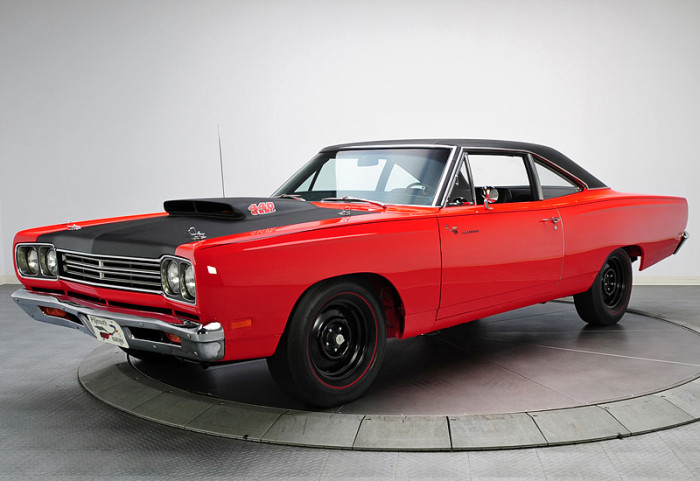 As more and more manufacturers jumped on the muscle car bandwagon, the more standard equipment they were fitted with to boost profitability, as the manufacturers figured (correctly) that demand wouldn’t drop that much even as prices rose. By the fall of 1967, however, Plymouth (which had its own dressed-to-the-nines tire-roaster in the GTX) decided that a lot of buyers were looking for back-to-basics, affordable muscle, which is why they introduced the Road Runner.

After paying Warner Brothers $50,000 to use its animated avian’s name and likeness (and spending $10,000 to develop a horn that sounded almost exactly like it), the Road Runner (which used the same A-body shell as the GTX, Satellite and Belvedere) rolled into showrooms and, more often than not, rolled out with new owners not long afterward. The fact that creature comforts like power windows and bucket seats weren’t even optional (much less standard) kept the starting price just below $3,000, even though the likes of sport suspension, dual exhaust and a high-output 383 V8 were standard (The 426 Street Hemi was the only optional engine initially.). That’s what you call having your priorities in order. And don’t forget about the NASCAR chic Road Runner Superbird of 1970… 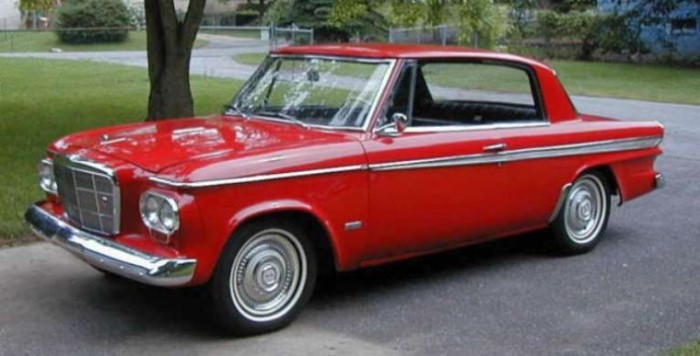 Studebaker might have been down by 1963, but it wasn’t out just yet. To prove it, the company rolled out a pair of high performance versions of the compact Lark: The Lark R1, with a 240 horsepower 289 cubic-inch (4.7L) V8, and the Lark R2, with 289 horsepower from a supercharged Studebaker 289. In addition to the added power, the Rs came with such other go-fast goodies as front disc brakes, heavy duty suspension, and a beefy Dana 44 rear axle with limited slip.

Alas, the writing was on the wall. The company’s automotive operations were hemorrhaging money at an astounding rate, which led to the closure of the South Bend, Indiana factory in December 1963. All Studebaker car production then shifted to Hamilton, Ontario, Canada – minus the R models – before ending for good on March 16, 1966. 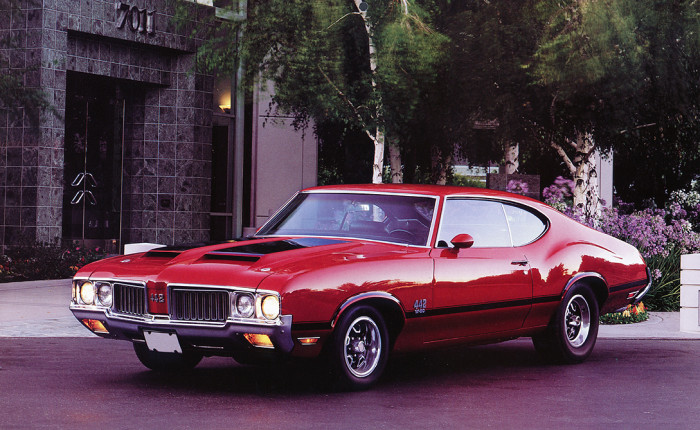 When word of the existence of the Pontiac GTO trickled out to GM’s other divisions, Oldsmobile was the first to respond with the 1964 4-4-2. However, the 4-4-2 – which originally stood for a 4-barrel carburetor, 4-speed manual transmission and dual exhaust – wasn’t quite as hardcore (at least initially) as the GTO: The engine was 330 cubic-inches (rated at 310 horsepower and 355 lb.-ft of torque), right at the allotted maximum, and you could order the 4-4-2 package on any 1964 mid-size Oldsmobile except the station wagons (Yes, some 4-door ’64 4-4-2s were made.).

Starting in 1965, however, Olds engineers went to town, developing 400 cubic-inch (6.6L) and later 455 cubic-inch (7.5L) powerhouses, cold-air induction, lightweight plastic front inner fenders, fiberglass hoods and aluminum rear differential covers. The 4-4-2 name remained in use through 1987 (with a hiatus between 1981 and ’84). Most purists prefer believe the story ends there, and not with the high-zoot showroom stock racer version of the four-cylinder, front-wheel-drive Cutlass Calais sold in 1990 and ’91. 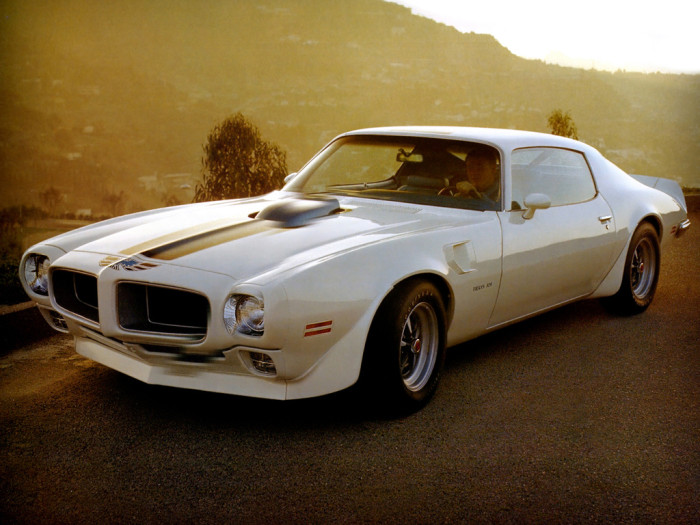 The 1967 arrival of the Pontiac Firebird gave GM’s excitement division a second model line with which to draw the youth market into showrooms. But it would be another two years before a special Firebird came on the scene: The Trans-Am. Named for the eponymous racing series (Pontiac actually had to pay the SCCA a licensing fee of $5 for each one sold.), the first Firebird Trans-Am was only offered in white with blue accents and included a rear wing, rear-facing front fender scoops and the 400 cubic-inch (6.6L) Ram Air III V8 rated at 335 horsepower.

Subsequent Firebird Trans-Ams added more colors and other features, but one thing remained constant right up until the end of production in 2002: It was the top of the Firebird food chain in terms of both performance and style…even when it didn’t have a V8, in the case of the 1989 20th Anniversary model that used the old Buick Grand National’s turbocharged 3.8L V6.

Even though the ‘Cuda moved to Chrysler’s dedicated E-body pony car platform in 1970, Plymouth wasn’t left without a sporty version of the Valiant, for 1970 was also the year the Duster debuted. The fastback styling of the Duster (which spawned a Dodge twin, the Demon, for 1971) gave it a decidedly sporty silhouette, while the Duster 340’s 340 cubic-inch (5.6L) V8 doled out 275 horsepower worth of scoot. It wasn’t rip-your-face-off-fast, but its relatively light weight meant it could hold its own with some pretty heavy hitters. 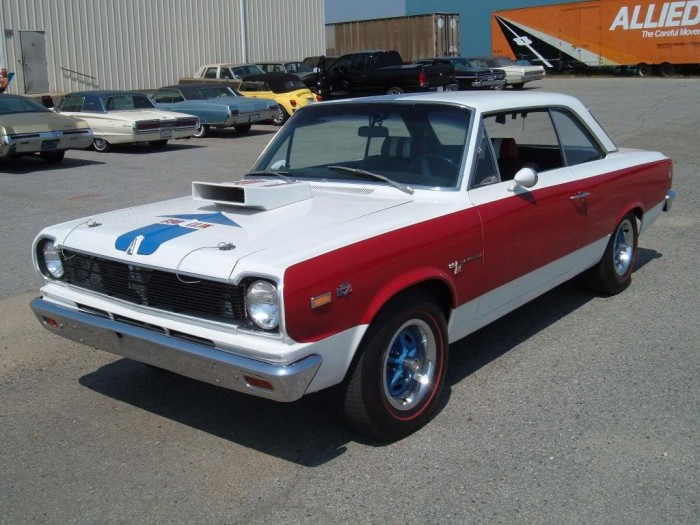 For most of its early history as a merged entity (read: disregarding Nash’s and Hudson’s stints as separate companies), AMC was a purveyor of conservative, inoffensive motorcars designed to appeal to a broad spectrum of consumers. That started to change with the arrival of the fastback Rambler Marlin coupe in 1965, but its polarizing proportions and ho-hum engine lineup made it a real square in the eyes the average young new car buyer.

Thankfully, for 1969, the crew in Kenosha jumped into the muscle car wars with both feet, and did so wearing water wings in the form of the Hurst Corporation, which was well known as a maker of short-throw shift levers and other aftermarket performance parts. However, in those days, Hurst was also in the specialty car building business, having developed and built Hemi-powered Barracuda and Dart drag cars for Chrysler in 1968 and the 455-powered Hurst/Olds for Oldsmobile in 1968 and ’69 (a clever end-run around the 400 c.i. ceiling for mid-size cars in place at GM at that time).

The car that resulted from the AMC/Hurst collaboration, the SC/Rambler (See what they did there?) started out as a humble Rambler Rogue 2-door hardtop, into which Hurst crammed the burly 315 horsepower 390 V8 available in the AMX, Javelin SST and Ambassador SST and backed it with a close-ratio 4-speed manual transmission and a limited-slip differential. Heavy duty suspension, braking and cooling systems, plus unique trim and one of two patriotic paint schemes were other distinguishing features of this one-year-only, $2,998 giant-slayer. Such a bummer, then, that only 1,512 were made…