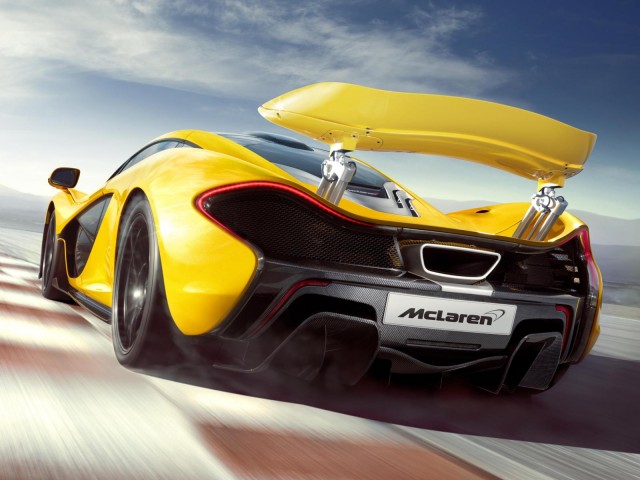 In the automotive world, patience is truly a virtue. Toyota spent their sweet time teasing the release of the FR-S/GT86/BRZ and even took nine years to deliver the LFA to us, after they decided to swap the aluminum body panels for carbon fiber. Lamborghini spent over a combined half a century on the four V12 predecessors (Miura, Countach, Diablo, and Murcielago)to the Aventador. So it would seem to be that the longer a car takes to release, the more awesome it will be as a result.

The company that one Bruce McLaren founded is no stranger to the waiting game. After release of the F1 back in 1992, it took them over two decades to follow it up with it’s successor, the P1 you see before you on these pages. We’re glad to see that the car hasn’t changed too much from the concept released at last year’s Paris Motor Show and now that we’ve got some information on the numbers, we’re really excited to see it premiere at the upcoming Geneva Motor Show. Welcome to the 2013 McLaren P1. 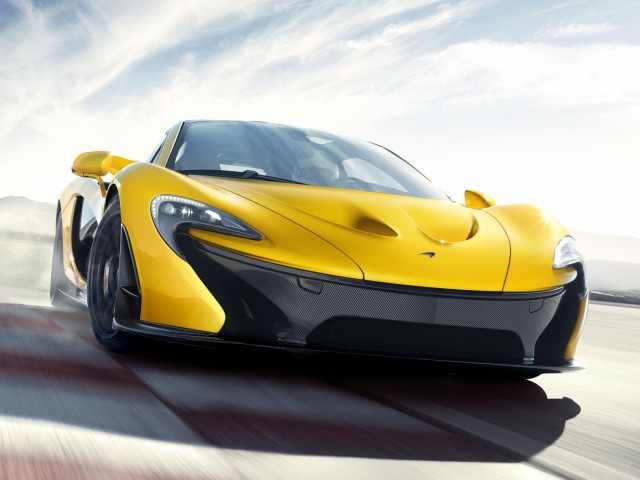 If you’ve been living under a rock or frozen in carbonite and are still unfamiliar with the P1, aerodynamics is the absolute name of the game. Every angle of the P1 screams that it was designed in a wind tunnel, and then re-designed again and again. Most likely by men with beards and in pristine white lab coats holding clipboards. McLaren actually went about collecting feedback from various potential customers immediately after the P1 concept reveal in Paris and the overwhelming response was to maintain the concept’s appearance – so they did. Guess we have something to thank the 1% for after all. 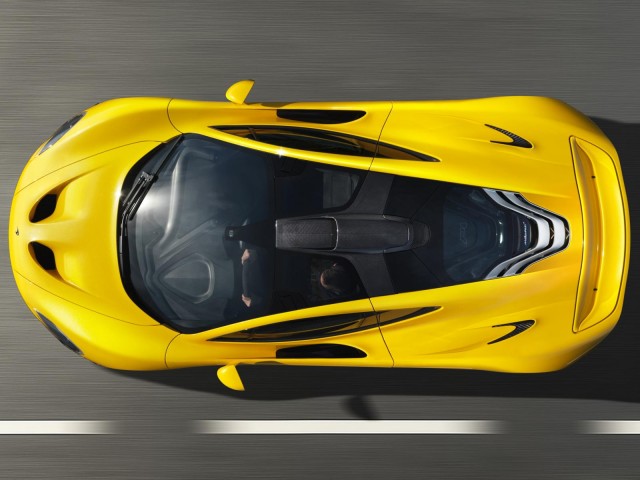 As a result of this maddening aerodynamics study, the P1 carves out the air in front with a cD of 0.34 – which isn’t all that brilliant until you consider that it produces over 1300lbs of downforce. This figure (which is 5x the downforce of the MP4-12C) is generated through the use of numerous active aero pieces on and underneath the car, a Drag Reduction System (DRS) rear spoiler that can adjust to a maximum attack angle of 29 degrees, and extensive use of the McLaren logo in ducting design. Kidding. Sort of. 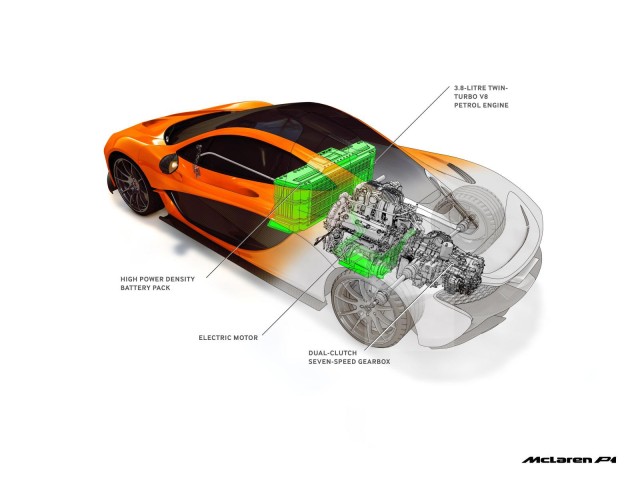 The P1 was created to become the“quickest and most rewarding series production car on a circuit” and to do so, McLaren has outfitted the car with the M838T 3.8L twin-turbo V8 and a “highly effective” electric motor to produce a combined 903HP (727 from petrol and 176 from electricity) and 664lb-ft of torque. McLaren says this combination will help ensure instantaneous throttle response throughout the entire rev range – much like a naturally aspirated engine would deliver. Purportedly, the P1 will even be capable of a full electric drive mode for up to 12 miles, more than enough for, I quote, “an owner to drive to a city centre, have dinner, and return home”. Nice. 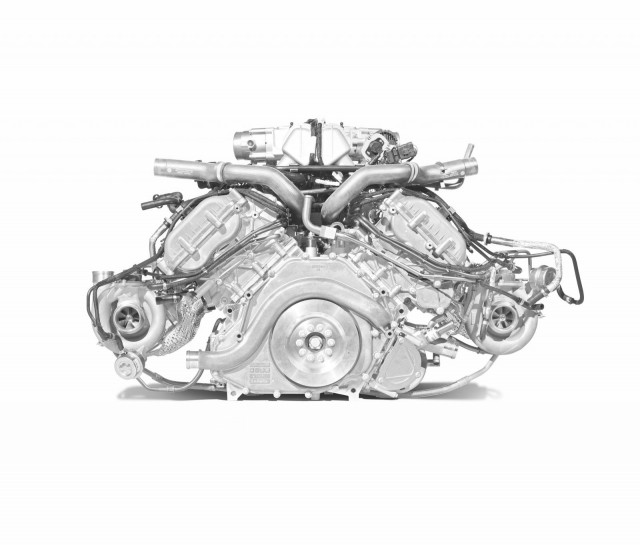 To store all the potential energy generated by the potent motor combination, McLaren has built and packaged a 212lb lithium battery unit directly into the carbon fiber chassis. As any laptop user will tell you, battery packs can get real hot, real fast, so McLaren has split the coolant flow to ensure that each individual battery cell will remain at the same temperature at any given time. That’s some serious engineering shenanigans right there. 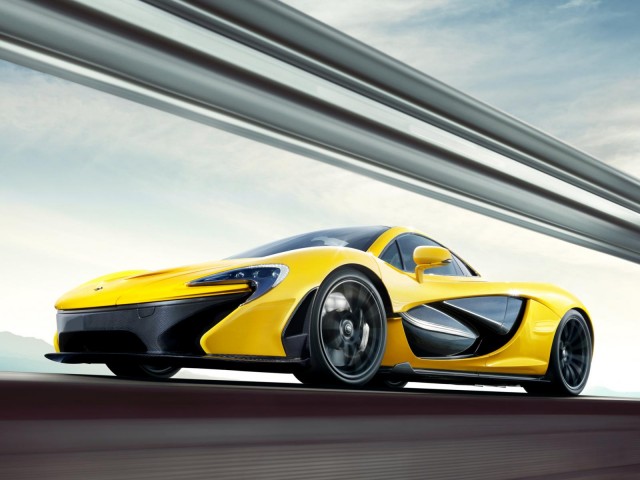 In the end, with the aid of McLaren’s Instant Power Assist System (IPAS), which we are still sorting out the details of, the P1 will accelerate from 0-60MPH in under three seconds, 186MPH in under 17 seconds, and will crack all the way up to it’s limited top speed of 217MPH. This seems to imply that some ECU fiddling will unlock the true top speed potential of the car, although that will remain to be seen by any intrepid owners. While the P1 was never designed to compete with the sheer speed of the Bugatti Veyron, we still wouldn’t be surprised to find an unlimited top speed somewhere around the 240-250MPH neighborhood. 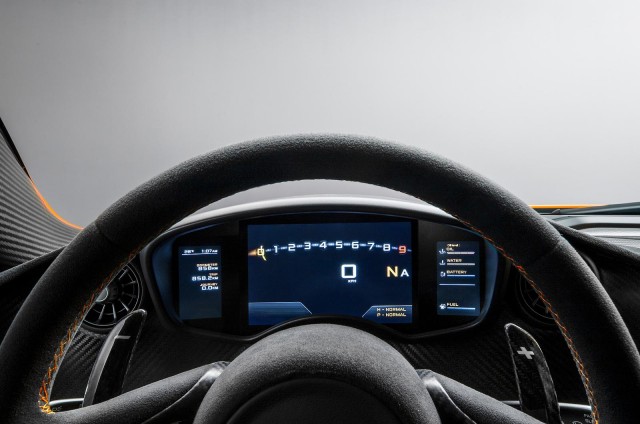 The interior of such a purposefully designed car should express that design philosophy and that is exactly the case in the P1. With a fighter jet-inspired digital dash and a full glass canopy overhead, the P1 carries on the tradition of super/hypercars influenced by aviation design. Unlacquered carbon fiber is unabashedly exposed throughout the cabin, carrying on the overarching performance theme and saving roughly 3.3lbs without all the extra resin. 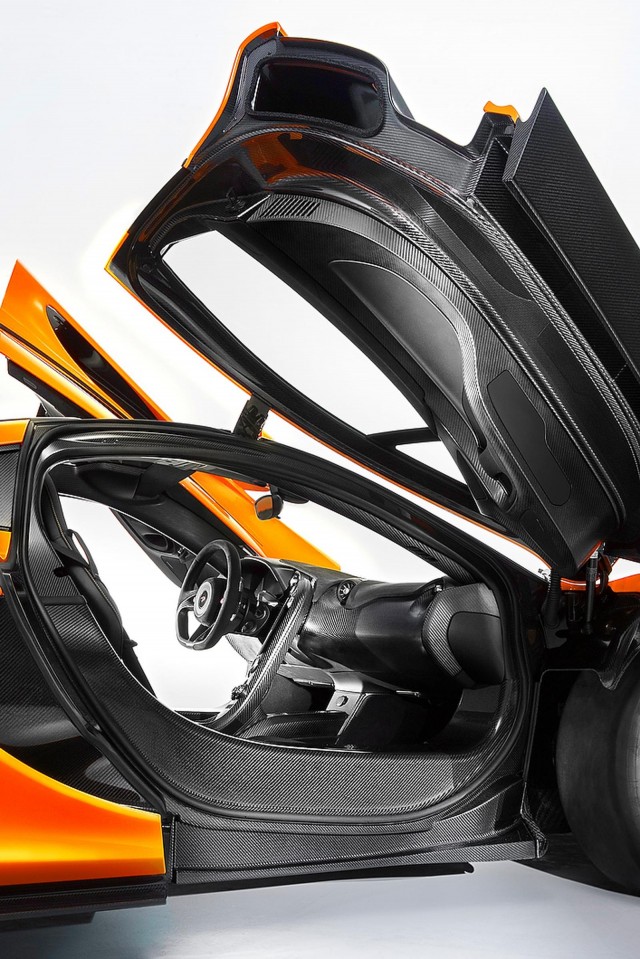 With the car’s purpose so well laid-out, the P1 will come with nearly everything standard and by everything we mean climate control, satellite navigation, and some premium audio devices. That’s it. Any other options to be offered on the car are completely unique and will have to be done through the McLaren Special Operations team. So if you really want to be able to hear what your date is saying while resting her feet on the exposed carbon fiber you might have to spring for additional sound deadening by way of MSO. 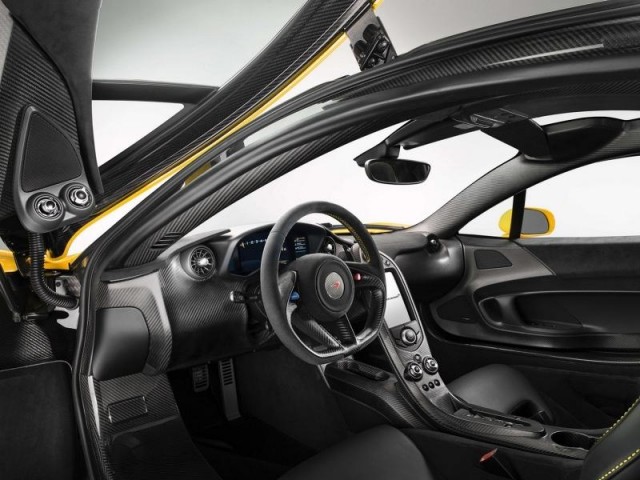 To give customers even more of that racing feel, the P1’s steering wheel was designed through an extensive process involving many a McLaren world champion. Various racing drivers’ grips were modeled in CAD, scanned in carbon fiber, and then clad with some Alcantara. If you ever get the chance to take hold of the P1’s wheel, know that you’ll be holding onto racing history for dear life. Purists will also take note that the original McLaren F1’s central seating layout has been done away with, but we think the steering wheel itself will help them forget about it. 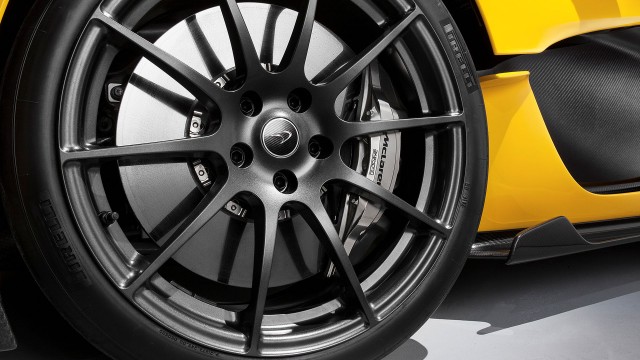 To lay down the aforementioned horsepower figures and times, the P1 relies on a bespoke set of Pirelli P-Zero Corsas that would most definitely cost a pretty penny were you to hoon about and do some awe-inspiring donuts. Another McLaren F1 partner, Akebono, is responsible for bringing the P1 to a standstill and to do so, they have fitted the P1 with unique carbon ceramic discs – which is nothing extraordinary until you consider that this specific carbon ceramic has only seen duty before on spacecraft. The undoubtedly expensive material has superior heat dissipation properties and even features a thin ceramic layer on both brake friction surfaces to provide the smoking hot looking mirrored finish above. 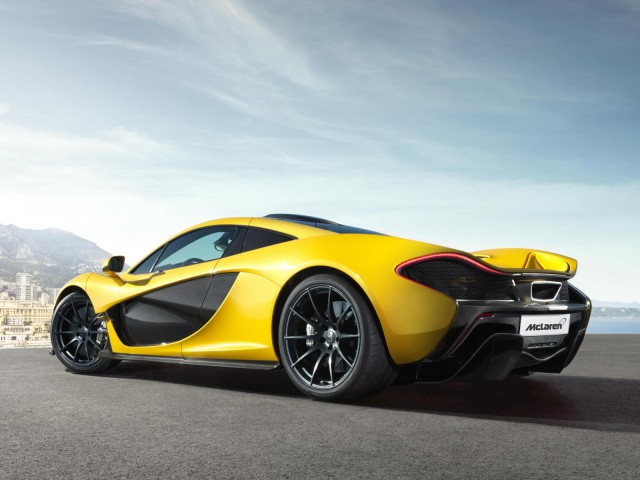 The world’s elite are really well-catered to regarding automobiles for this upcoming year. With the Ferrari F170 (or F150 or whatever it will end up being designated) to be released at Geneva, Porsche 918, Lamborghini’s rumored Geneva debut, and now the McLaren P1, it’s never been a better time to be loaded with money – and you’ll have to be if you want a P1. With only 375 total copies being made at a base price of $1.2M, the P1 will truly put their owners up on the hypercar elite pedestal. Fortunately, we can all afford to dream…