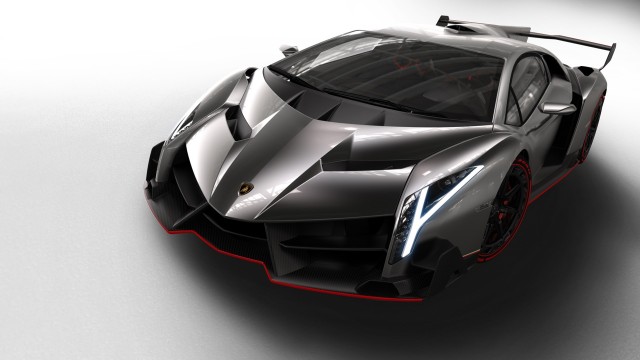 In the weeks leading up to the 2013 Geneva Motor Show, there was hell ofa lotof build up around the McLaren P1, the often-teased Ferrari LaFerrari, and even the Toyota/Subaru FR-S/BRZ droptop. Yet it was a strangely quiet affair around Sant’Agata. Most people knew that Lamborghini was up to something, but nobody was too sure. Personally, this editor thought that Lamborghini would be showcasing a new four door hybrid competitor ala their Estoque concept a few years back.

Instead, Lamborghini took the wraps off their car and dropped a bomb. A sinister, swooping, angry looking bomb that stopped more than one show-goer in their tracks and put media camera shutters on overtime duty. It was clear that the fighting bull wanted a slice of the hypercar pie that Porsche, Ferrari, and McLaren were all competing for and Lamborghini had done their homework. No messing around, no soft side, and not a hybrid system in sight. Introducing the Lamborghini Veneno… 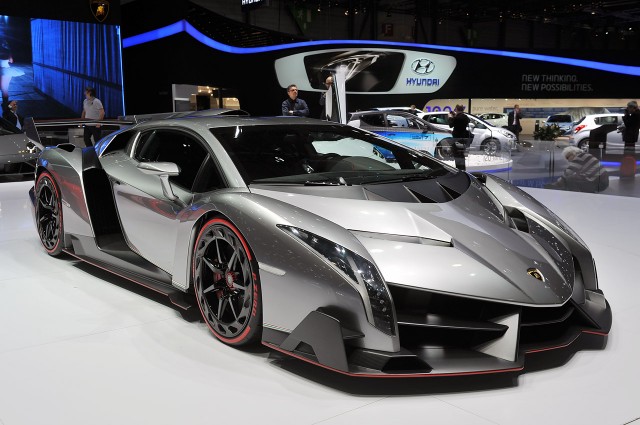 First things first, the Veneno’s exterior is stunning. Lamborghini really has a good thing going on with the metallic gray, black, and red theme that they began with the Sesto Elemento and it plays very well to all the sharp angles that make up the Veneno. And by god are there a lot of angles. 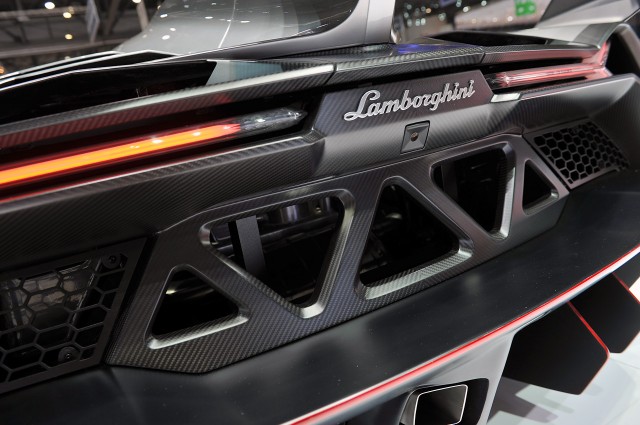 I always imagined the Lamborghini design studio to have a giant LEGO-esque tub of vents and openings in various sizes and shapes. Corporate lets the designers know what their starting point is and bring in a clay model base. The designers then pin the model up to the wall and take turns playing darts with the vents/openings. Unfortunately for my vision, Lamborghini is guided by their pursuit of grip and “consistently focused on optimum aerodynamics and cornering stability”, leaving most of the design work to the wind tunnel and fluid dynamics simulations. 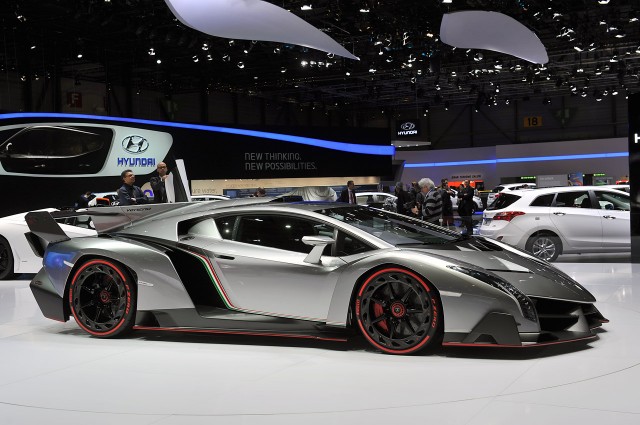 Of course, while Lamborghini may not have a long, storied racing history to draw design and performance inspiration from, Audi does – and Audi just happens to own Lamborghini. Looking at the front wings and the way the fenders have been pulled out from the body provide brief glimpses into the front aero design on the Audi R18 TDI. Even the way the Veneno headlights have been shaped to curve with the fender play homage to the fearsome Le Mans competitor. 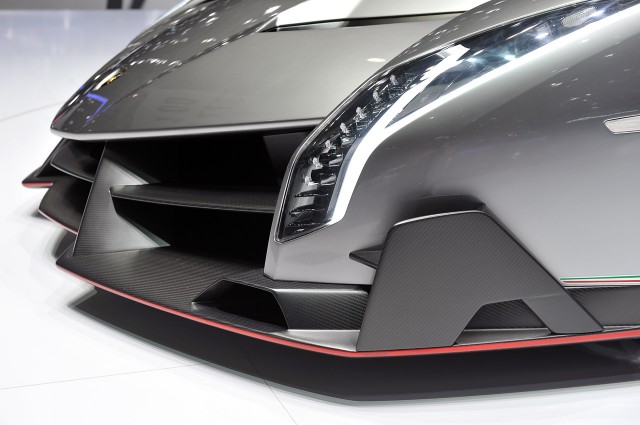 To back up all its shouty racing intentions and exterior, Lamborghini has further developed the Aventador’s 6.5L V12 to a more than adequate 750HP. Just enough to launch the Veneno from 0-60 in roughly 2.8 seconds and let it snort and rampage all the way up to a top speed of 220MPH. To ensure that this happens consistently, the Veneno is equipped with a 7-speed manual ISR transmission and permanent all-wheel-drive. Good to see one automaker still believes in rowing your own gears. 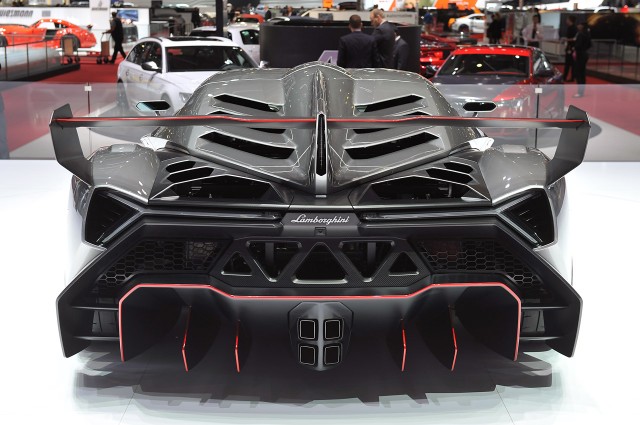 Over the years, Lamborghini has poured untold amounts of money and time into R&D on carbon fiber and its production. As a result, the Veneno is almost entirely composed of traditional carbon fiber and some bespoke Lamborghini materials such as their Forged Composite (developed in conjunction with Callaway Golf Company) and CarbonSkin in the interior. 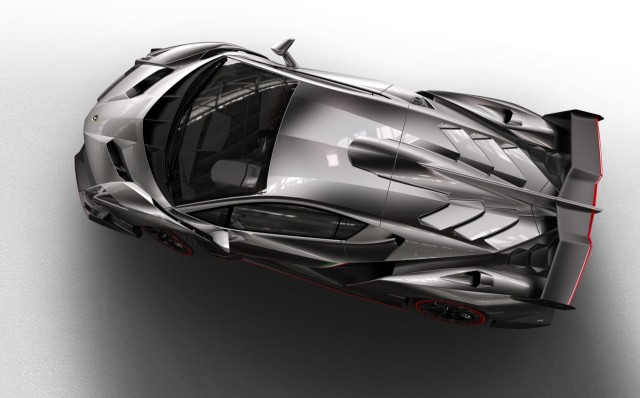 This helps keep the dry weight down to 3190lbs – 275lbs lighter than the originally scant Aventador. And while the Pagani Zonda R may tip the scales at a ridiculous 2360lbs with a nearly equivalent number of horses, the Veneno can be driven on the streets. 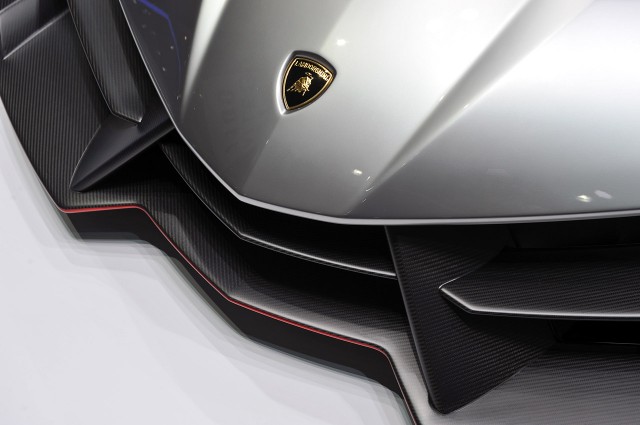 Not that you would want to really drive it on the street with the thin strips of rubber that Pirelli and Lamborghini are calling tires. Tapping Pirelli’s P-Zero line to make sure all their bull’s 750HP gets put down properly, Lamborghini has also fitted the Veneno with unique central locking rims. Measuring 20in at the front and 21in at the rear, the 7-spokes feature a carbon-fiber ring with built in vents that act like a turbine at speed to provide additional cooling to the carbon ceramic brakes. 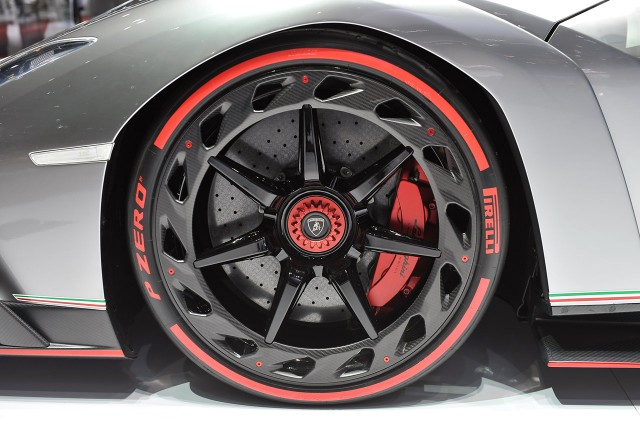 Keeping in tradition with Lamborghini nomenclature, the Veneno is named after one of the fastest and most aggressive fighting bulls in the history of bullfighting.

“His name [Veneno] became popular in 1914, when he fatally wounded the famous torero José Sánchez Rodríguez during the bullfight in the arena Sanlúcar de Barrameda’s, Andalusia, Spain.” 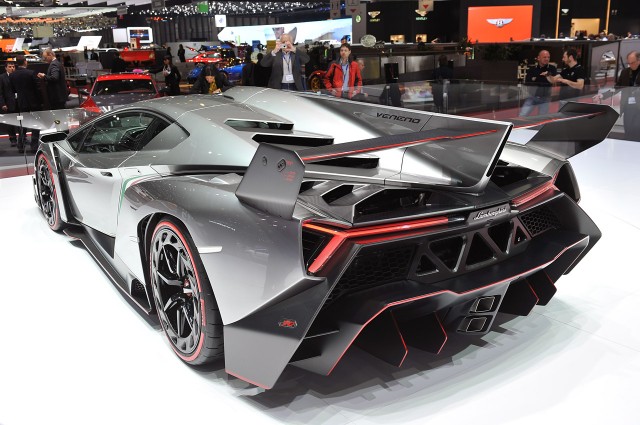 As you read this article, the four production units of the Lamborghini Veneno have already been spoken for. Three were purchased by independent customers for the stratospheric price of $4.6M USD while the fourth will remain in Lamborghini’s possession. While car number 0 (the Geneva Motor Show model you see on these pages) features a narrow tricolore stripe along the door, the other three cars will each feature accents in a single color of the Italian flag: red, white, and green. 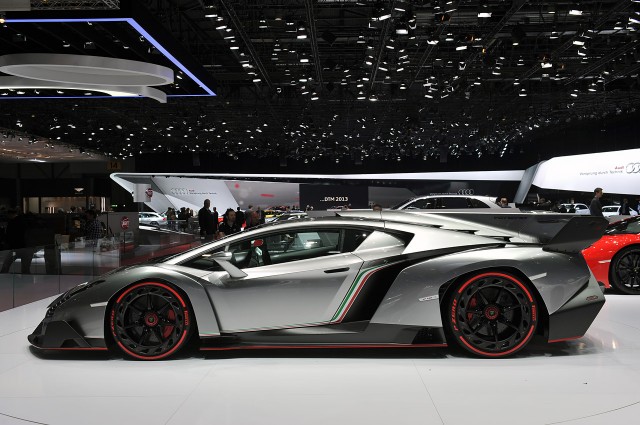 With the cars scheduled to be delivered throughout the rest of 2013, we really hope one of these customers requisitions their car in classic Lamborghini Giallo Yellow. As for the rest of us, there’s always an empty wall in need of a Veneno poster. 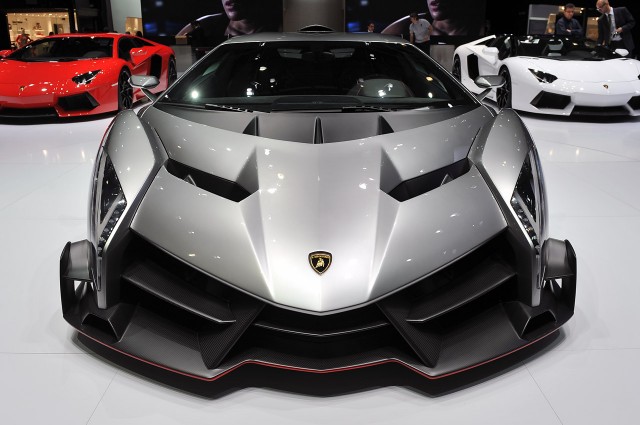