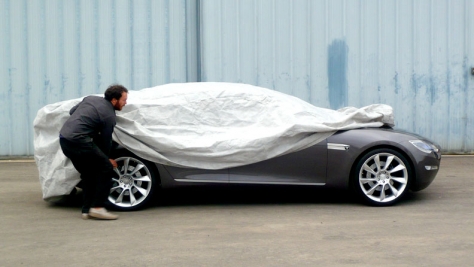 The Tesla Roadster, a marvel of design and engineering, has a cool factor of 10. But at a base MSRP of $109,000 with only small production runs, it is out of reach for the majority of consumers both in price and availability. It has always been Tesla’s plan to start up-market and cascade down, using the revenue and momentum to offer more affordable cars in greater supply. That vision will be one step closer to reality when their Tesla Model S prototype sedan is unveiled on March 26th at the Tesla design studio, located inside the SpaceX rocket factory in Hawthorne, California.

In preparation, the company has released the teaser image above and confirmed an “anticipated base price” for the Tesla Model S at $57,400. Because there is a $7,500 federal tax credit available, that should drop real costs closer to $49,900. Tesla believes that because the car will have reduced maintenance and refueling overhead, lifetime ownership costs will match cars that have much cheaper sticker prices. Specific details concerning the Model S will be available at launch.