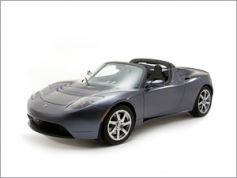 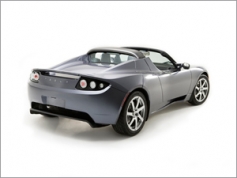 Last night I attended the Tesla Flagship Storeofficialgrand opening in Los Angeles. After walking across the red carpet (nobody paid any attention) and past thepaparazzigalore, I made my way inside. The showroom is modern and industrial like any number of cool LA lounges. In fact, it had a clubby feel with lots of open space, steel and concrete flooring. I wish I could say that the ‘who’s who’ in the celebrity circle of green fanatics was in attendance but the likes of Leno, Larry David and Brad Pitt were glaringly absent.

But despite the ho hum of the ambience, the purpose of the event was getting an up- close look at the car that has created frenetic excitement, resulted in many false rumors and led to tremendous industry buzz.

The Tesla Roadster is everything and more than it’s cracked up to be. The cockpit is comfortable, well laid out and extremely clean. Getting in and out is a hastle because of its extremely low frame, but once inside the trouble seems a distant memory and after the ride the lasting excitement erases any qualms.

Tesla started out with a Lotus Elise chassis but ended up with a car that is only 8% Lotus hertitage. In fact, the Roadster shares no body panels with the Lotus. Being 30% heavier than an Elise, the Tesla is still extremely light, tipping the scales just under 2700 pounds. 990 pounds of battery cells (all 6831 of them) account for the difference.

The frame itself comes from a company in France but then Lotus assembles the ‘glider’, which is everything except the power train. Tesla designs and builds the batteries, motor, transmission and electronics in CA where it installs the power train. Due to the value of these components, the Roadster is classified as a CA manufactured vehicle.With no oil changes required and regenerative braking that saves excessive wear on the pads, the Tesla should require very little maintenance.

That said, the batteries, which take only 3 1/2 hours to reach a full charge, will most likely require replacement after 4 years or so at a current cost of $20k. So, assuming you get 4 oil changes a year in your gas guzzler and replace the brake pads once in that time, the overhead is $19,400 more for a Tesla Roadster. But hey, you’re not buying a car like this cause it saves money, now are you?

The test drive was definitely the highlight of the evening. I say test drive but ‘ ride along’ would be more apt. The designated professional driver definitely put the car through its paces. In a matter of seconds from leaving the dealership we were doing 70 going down Sepulveda. The car revs to 13,000 rpms but unlike a gas powered car there is no wind up. In fact, ridiculous amounts of torque are available at any speed and any rpm. The car is eerily quiet which makes getting hurled forward at high speed very unsettling without the familiar whine of a high-performance engine and the growl from the exhaust.