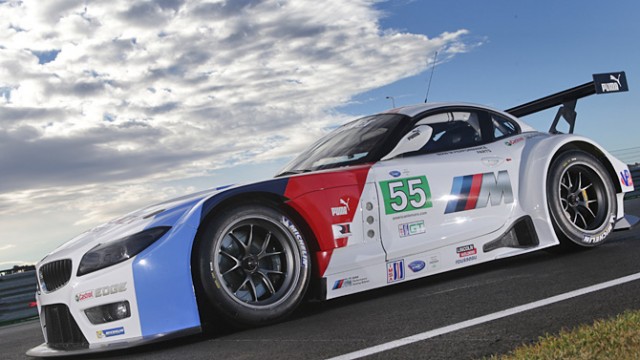 BMW Motorsport and BMW Team RLL unveiled their new ALMS entry today at Daytona International Speedway. The new Z4 GTE is based on the Z4 GT3 that has been successfully raced across Europe. “We are setting out on a development year, but are very confident we have once again developed a car that has the potential to win races and titles in the form of the BMW Z4 GTE” saidBMW Motorsport Director Jens Marquardt today at Daytona.

BMW Team RLL will once again field two cars in the GT Class of ALMS, which is the Series’ last year before the previously announced merger with GrandAm Series. Car number 55 will be driven by BillAuberlen and Maxime Martin, who is new to the Series. Dirk Muller will drive the 56 car, which will be co-driven by both Joey Hand and John Edwards. John will take driving duties of the #56 car when Joey Hand is busy driving in the DTM Series in Europe.

The car has been in development since July of last year, and was first tested earlier this year. Unlike its European GT3 counterpart, it does not have electronic aids such as ABS and DSC, which are not permitted in the ALMS Class it competes in. Sub5Zero will once again travel to Mazda Laguna Seca Raceway to bring you coverage of the American Le Mans Series race that takes place in May. We are very excited to see the new 2013 BMW Z4 GTE, as well as other newcomers to the Series like the Delta Wing.