Like the SUV craze that kicked off in the mid 80s, there is a new kind of race in play among auto makers. That new market segment is the four-door coupe, super sedan Grand Tourer. Of course, this is not the official name of the category. But essentially, this is a special niche that has garnered renewed interest and tons of momentum. The goal of the OEMs is to create a car that has the styling of a coupe, 4 access doors with plenty of leg room, superior performance and yet suitable for everyday driving.

Mercedes got off to a strong start with their CLS, first available in 2006. Its sleek, “fastback” roofline and low slung, wide body made it an instant success, raising eyebrows and spurring new competition. Maserati has been a long-time contender in the super sedan category due to its exclusivity and impressive performance stats and has recently moved closer to the coupe aesthetic with swooping rooflines in their latest Quattroport. New entrants to the market are quickly nudging their way to the fore and include the Aston Martin Rapide, Lamborghini Estoque, Porsche Panamera and Audi A7. Each car brings its own unique branding, making sure that carbon copy offerings are a thing of the past.

The first US production versions of the Mercedes-Benz CLS500 and CLS55 AMG came to market in 2006. The original flavor arrived with a 5.0L V8 306 hp engine while the AMG variant stepped up to a 5.4L V8 capable of 469 horsepower. The company has upgraded engines since then and now offers a 5.5L V8, 382 hp CLS550 and 6.3L V8, 507 hp CLS63 AMG. Performance stats put 0-60 mph for each car at 5.4 seconds and 4.3 seconds respectively. The transmission offered is a 7-speed automatic with Sportronic, the company’s manual-shift alternative. Paddle shifters are available for the CLS550 and standard on the CLS63. 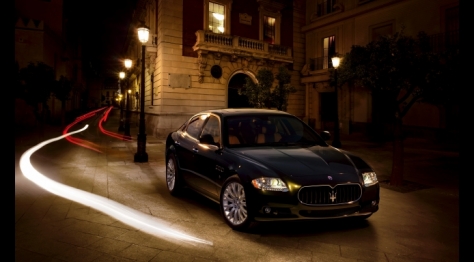 Maseratti has had a super sedan in play since the early 60s when the first ‘Tipo 107’ Quattroporte was released to compete against the Lagonda Rapide and Facel Vega, two venerable foes at the time. Back then it had a 256 hp V8 engine with a top speed of 143 mph. Fast forward 4 generations to 2004 when the Pininfarina designed Quattroporte made its debut with a 4.2-liter V8 engine producing 400 hp. With a 4101 pound curb weight, 0 to 62 mph takes 5.5 seconds with a top speed of 164 mph.

For 2009, Maserati refreshed the styling, making it more “coupe-ish”, and has several trims available including the base Quattroporte, the Quattroporte S and Quattroporte Sport GT S. The later bumps horsepower up to 433 bhp with a 0-60 time of 5.3 seconds and a top speed of 177 mph. Maserati puts out about 3000 Quattroports a year with prices ranging from $119k for the base model up to $133k for the Sport GT S. Since Maserati was one of the original progenerators of the super sedan it’s only fitting that the name Quattroporte has a literal translation to “four doors” in Italian. 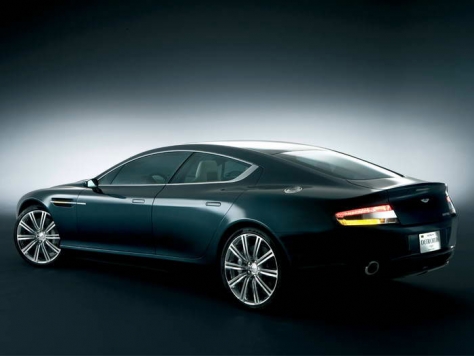 First unveiled in concept form at the 2006 Detroit Auto Show, the Aston Martin Rapide resembles an elongated DB9, with the signature grill, tail lights and side slats that make the company’s car instantly recognizable. That’s because, basically, Aston Martin extended the DB9’s wheelbase by 10 inches, raised the roofline 2.5 inches and slapped 4 doors on. The interior will be pretty close to the same as the DB9 with loads more leg room and the option to the passenger of sliding his/her feet under the front buckets. In addition, LCD monitors mounted in the headrests and a panoramic glass sunroof should make rear seat passengers forget they’re riding in the second row.

The Rapide will get its power from the company’s 6.0-liter V12 engine, tuned to put out 500 bhp. The transmission incorporated is a six-speed ZF automatic with Touchtronic control. Because of the excess weight, tipping the scale at 4277 pounds, the Rapide will probably only make 0-62 in 4.8 seconds, which is still excellent. It should have a top speed of 180+ mph. The Rapide will be Aston Martin’s first 4-door car produced outside of England, with Magna Steyr in Austria contracted to build each sedan. Price estimates put the car around $200,000 with availability of 2000 units per year. 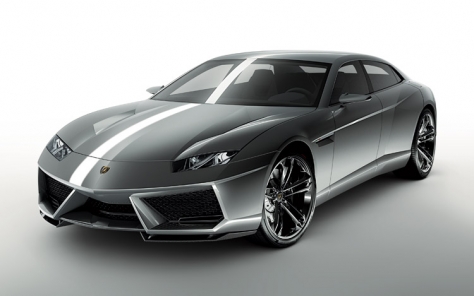 The Lamborghini Estoque first appeared at the 2008 Paris Motor Show. At that time it was still in the concept stage where it currently remains. A green light from VW in the very near future could result in the car being production ready by 2012. If it gets the go ahead, it would be very limited production with only 500 units each year. The four-door sedan would be Lamborghini‘s first front-engine vehicle since the Rambo Lambo in the late 80’s and early 90’s. The current engine is a 5.2 liter V10 but speculation of a V8, V12 or even turbo-diesel has been kicked around. In case you are wondering about the name, Estoque is a sword weapon used by matadors in bull fights.

Since the late 80s when Porsche released the 989 concept, there has been plenty of speculation concerning when a production variant might come to fruition. The Porsche Panamera has been one of the most widely spy photographed cars in recent memory. In conjunction with leaked images and video over the last couple years, there has been no shortage of teasers. The name Panamera comes from the Carrera Panamericana race in the early 50s in Mexico. The Mexican government sought to attract international trade after the Panamerican Highway was built and organized a 5 day race across the country to celebrate its accomplishment.

Due out in late 2009, the Porsche Panamera will have several engine options as well as drive-trains. A 300 hp 3.6-liter V6, 405 hp 4.8-liter V8 and 500 hp turbocharged 4.8L V8 will be available in the Panamera S, Panamera 4S, and Panamera Turbo respectively. Not since 1985, when the 928 was axed, has the company produced a V8 engine for their cars. This super sedan is also the greenest of the bunch with a hybrid engine in the works as well for 2012. The Panamera will be front engine, rear wheel drive with all-wheel available on higher end models. Transmission options include a 6 speed manual or 7 speed PDK. The curb weight is 3868 lbs which means performance of the turbo should be fairly close to the Aston Martin Rapide. Despite all the design criticism, Porsche plans to put out 30,000 units per year to meet estimated demand.

The Audi Sportback Concept is aimed squarely at the Mercedes CLS and Porsche Panamerica. The car will most likely appear in production form in 2011 as the Audi A7. It takes its design cues from the A5 with the addition of 2 extra doors. Unlike its super sedan brethren, Audi has outfitted the Sportback with a 3.0L turbodiesel, indicating the future direction of the company’s power-plants.

The A7 will be bigger in size than the A6 with a fastback roofline, smaller rear windows and possible hatchback. The car will have Audi’s signature row of LED daytime running lights. As the comcept was just released recently at the 2009 Detroit Auto Show more details will emerge as the car moves closer to production.

With the current state of the economy, you would think that this vehicle class would be scaled back due to it’s high price range and exclusivity. However, with its unique niche and potential strong demand, it appears that it has the makings of a market segment poised to do quite well. The OEMs are all betting quite heavily on its success and it will be interesting to watch how the competition steps up.