Ah, the minivan. It is an exceptionally user-friendly, eminently practical car-based carrier of people and stuff. It is also a seven-seater (give or take) beacon to the rest of the world, signaling that you’ve abandoned any and all attempts at being cool, sexy, or any other exciting adjective. Sure, you may have managed to stay cool or sexy or whatever in spite of being a minivan driver, but people who see you in a minivan but don’t know you won’t know that, will they?

This is not to say that every minivan is uncool. The Toyota Previa, with its egg-on-wheels profile and supercharged inline-four lying on its side and under the floor, was cool by way of quirkiness. However, if you want a minivan that’s cool by way of being totally badass, you can find one by winding the clock back to 1994 and the Paris Auto Show. It was there that the Renault Espace F1 concept was unleashed upon the world. 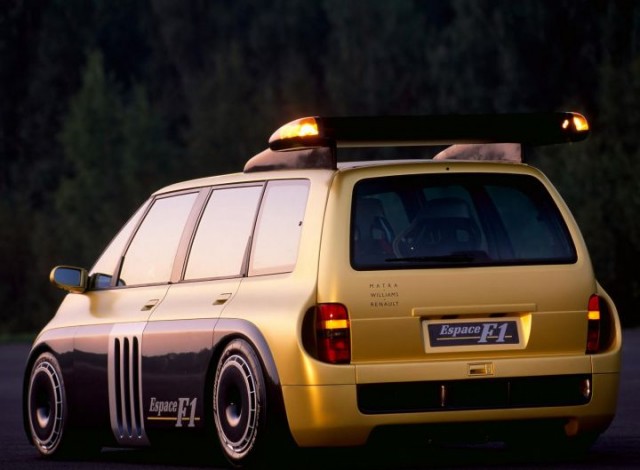 For those not familiar with the Renault Espace (i.e. damn near every American man, woman and child), it debuted in 1984, the same year as this continent’s first modern minivans, the Plymouth Voyager and Dodge Caravan. Originally, the Espace was to have been sold as a Talbot which, coincidentally, was for many years part of Chrysler’s European operations. But Chrysler, teetering on the bottomless pit of bankruptcy in 1978, sold its European operations to PSA Peugeot Citroen, and the rights to the Espace design were snapped up by Matra, the French engineering and manufacturing conglomerate that helped develop the Espace.

Matra shopped the design to Peugeot, but the company felt bringing it to market would be too expensive and too risky with regard to marketplace acceptance. Undaunted, Matra approached France’s other major automaker, Renault, with the MPV concept, and found a much more receptive audience. Initial sales were sluggish, to put it mildly (Just nine – nine – were sold in the first month.), but before long, Renault and Matra couldn’t crank Espaces out fast enough, and other European manufacturers were left scrambling to catch up. 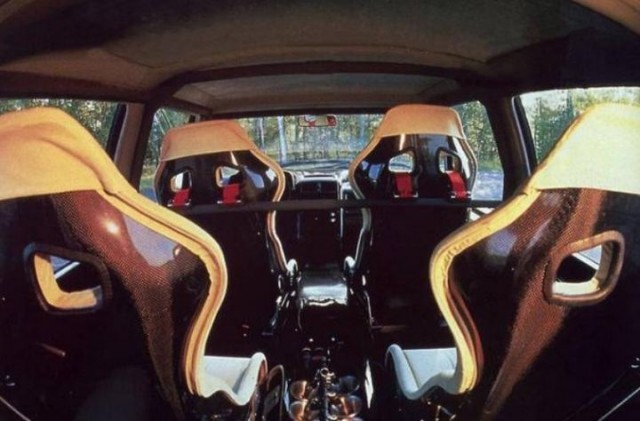 Fast forward a decade, and Renault and Matra were looking to celebrate their baby’s success. As it happened, Renault was the engine supplier for the Williams Formula 1 team at the time (and is once again in 2012). Somewhere along the line, somebody put deux and deux together and came up with dix. That is to say, this person came up with the idea of dropping the RS5 3.5L V10 F1 engine from 1993 (and a Williams 6-speed semi-automatic transmission) into the back of an Espace. Merde, baby.

Now, plugging a racecar drivetrain into the back of a van was hardly a new idea; Ford had actually done it thrice with its series of Transit-based Supervans. But no one to that point had done so with a van that utilized a car-based front-wheel-drive platform and was designed primarily for passengers. And rather than using all of the area behind the front seats for engine and other bits, the builders of this Frankenvan managed to leave enough room for two additional carbon fiber racing shells. And rather than an armrest or beverage cooler in between those back seats, you’ll find the howling V10 powerhouse basically identical to the one that carried Alain Prost to his fourth and final World Driving Championship. Why the “basically” qualifier? Well, Renault engineers were able to extract an extra 100hp out of the engine, lifting output to about 800hp. From 3.5 normally aspirated liters. Yowza. 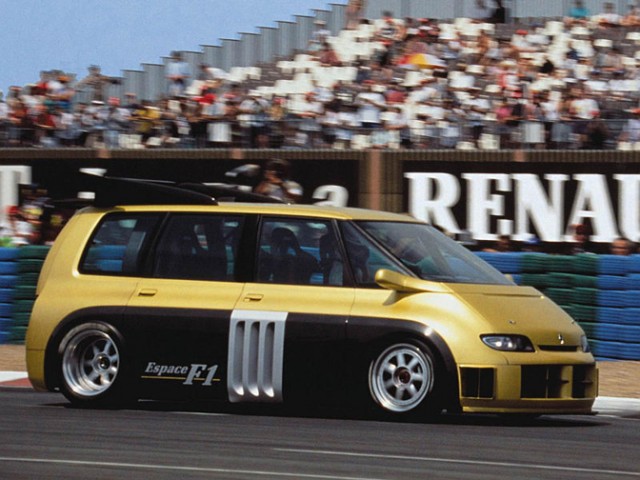 And in case you think the Espace F1 is solely about the grand prix grade engine and gearbox, bear in mind that the rear suspension was also cribbed from a Williams F1 car (The front was a bespoke design from Matra.), the production Espace’s fiberglass body panels were replaced by carbon fiber pieces, which include wider fenders, door skins and rockers to accommodate the wider track, radiator outlets and other hardware, a big rear wing was fitted, and carbon-ceramic brake discs were installed at all four corners. Total weight is 2,866 lbs.

Now, as you’d expect in a vehicle of this size, shape and girth, its performance figures aren’t quite on par with those of the Formula 1 car from which it received so many components. But they are still 31 flavors of bonkers: Standing start to 62 mph in 2.8 seconds. Standing start to 124 mph in 6.9 seconds. Zero to 168 mph and back to a dead stop in less than 2,000 feet. A rumored 1.5+ g in the turns. And a top speed of 194 mph. Those may not be F1 car numbers, but they’re sure as hell supercar numbers. From a four seat minivan. If the absurdity of all this isn’t making you cackle like a B-movie villain, your next ride will probably be in a hearse. 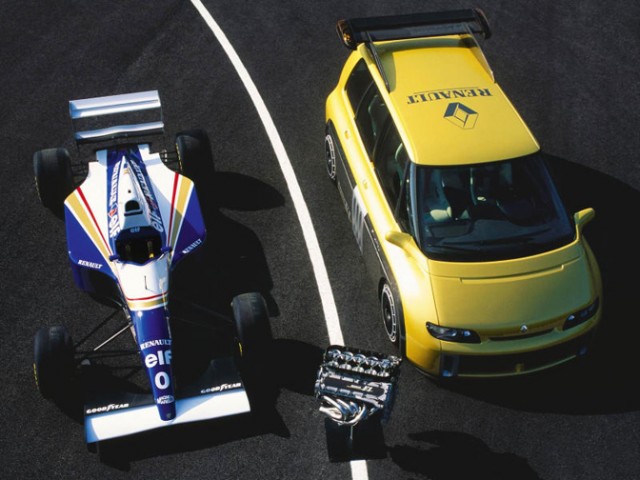 Unsurprisingly, the Espace F1 remained a concept. We’ve seen one video with two Espace F1s in the same shot, but we’d be shocked if more were made than just that pair. And even if it was produced in enough numbers to offer to the public, and it could be made to be street legal, it would have been the least practical mom taxi ever created. But practicality wasn’t the point; the point was to celebrate the success of the Espace and the F1 engine program, and generate marketing buzz through the sheer outlandishness of the underlying concept. And the outlandishness of the concept (and outlandishness of the performance) is the main reason why the Renault Espace F1 gets to join the Sub5Zero Fantasy Collection.