In early 1957, Jaguar had a bit of a dilemma: It had a whole bunch of D-Type race cars (in various states of completeness) sitting in its inventory, yet it had made the decision to pull out of racing and thus, cease further development on the D-Type. That raised the question: What to do with all those surplus race cars? The answer was turn them into road cars, creating a model called the XKSS. Sixteen of these street-legal Le Mans legends were built before a fire at the factory destroyed the remaining unfinished D-Type shells, and between their rarity and off-the-charts coolness (helped in no small part by the fact that Steve McQueen owned and enjoyed one for many years), they are extremely coveted.

Jump ahead to 1989 and Jaguar once again has a Le Mans winning race car in its arsenal: The XJR-9. And the man whose company built and ran the XJR-9, Tom Walkinshaw, has tasked designer Peter Stevens (the guy who would draw the McLaren F1’s sensuous skin a couple years later) with morphing the XJR-9 into a road legal supercar. What the team at TWR and Jaguar Sport came up with was an eminently-engaging exotic that would, unfortunately, in addition to getting lost in the great supercar shuffle of the early ‘90s, suffer the indignation of being overshadowed by another Jaguar supercar. This is the tale of the Jaguar XJR-15. 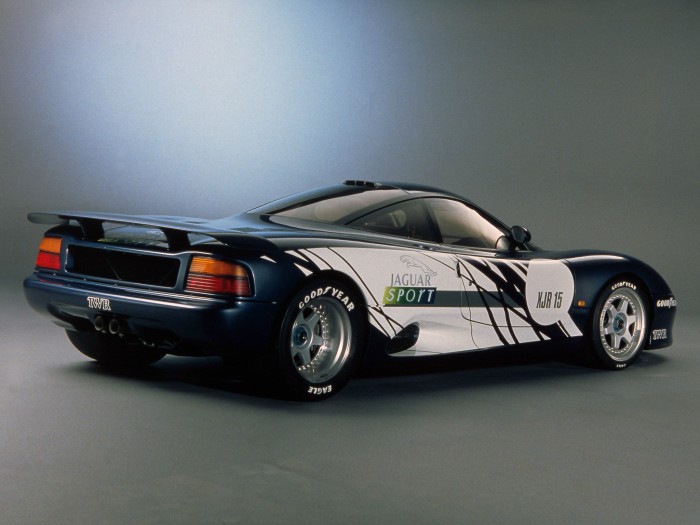 Originally expected to wear the designation R-9R, the XJR-15 is indeed based on the XJR-9’s bones; however, there are some noteworthy differences. Although the XJR-15’s monocoque is, like that of its FIA Group C/IMSA GTP forebear, crafted from a mix of carbon fiber and Kevlar (marking the first time such a construct was used to underpin a road-going car, beating the McLaren F1 to the punch by four years), it’s wider by 3” with a 1.6” higher roof. The broader cockpit dimensions naturally had a slight detrimental effect on aerodynamics, but the added cabin space and enhanced ease of ingress and egress made the sacrifice well worth it. And it’s not like the XJR-15 is a barn-door-on-wheels, either; Stevens managed to come up with an overall shape that played homage to the XJR-9 without fixating on it, with a much flatter nose and more curvaceous (Dare we say feline?) haunches.

Yet the XJR-15 wasn’t some styling exercise that also happened to use cutting-edge materials; it was a legitimate performer, too. Its endurance racer cousin donated its production-derived 60° V12 bottom end (which, as on the race car, doubles as a stressed chassis member), but the upper portion of the engine eschews the sports prototype version’s fancy twin-cam, four-valve-per-cylinder heads in favor of a set of lightly-hot-rodded stock single-overhead cam, two-valve heads that had been used to great effect by TWR in the mid-1980s on its factory-backed Jaguar XJ-S Group A touring cars. This jambalaya of Jag bent-dozen bits yields a 6.0L V12 that inhales through a pair of high-tech-for-its-day “drive-by-wire” throttlebodies to produce 450 horsepower and 420 lb.-ft of torque. Power is transmitted to the hefty rear tires through a poseur-intimidating unsynchronized 6-speed manual transaxle, though a more-forgiving 5-speed manual with a full set of synchros was optional. If you manage to execute every gear change in a quick and gnash-free manner, expect to hit 60 mph in 3.9 seconds and eventually top out at a gearing-limited 191 mph. None of those figures are anything to write home about in 2014, but in 1990 they were mega-respectable, and easily a match for what the typical F40, 959 or Diablo could dish out. 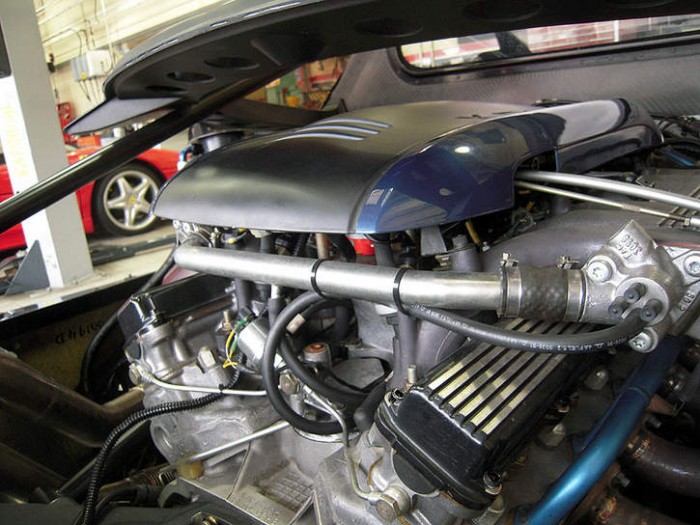 As you might expect, the Le Mans-ready theme continues for the handling hardware. The front suspension consists of a set of wide-based wishbones that act upon pushrods which, in turn, act on the fixed-rate, horizontally-mounted Bilstein dampers, while the rear uses vertically-oriented coil springs and uprights that fit within the wheel to allow more space for the downforce-boosting rear venturi tunnels. A beefy steel brake rotor with pads that get squeezed by an AP Racing four-piston caliper is installed at each corner. As for car’s overall behavior, most period road testers praised the XJR-15 for its surprisingly compliant ride, turbine-smooth power delivery (hardly uncommon among V12s), good feedback from both steering and chassis and predictable, well-balanced cornering attitude (though it was prone to extreme – but by most reports manageable – oversteer when pushed too hard). An average driver could hop in and have a lot of fun hot lapping a track, yet the actual limits were so high and so enjoyable to explore that a professional hot-shoe wouldn’t find it boring.

And a few professional hot-shoes definitely weren’t bored with driving XJR-15s in 1991, for that was the year the Jaguar Sport Intercontinental Challenge took place. No, we’re not sure how a series could consist of three Formula 1 support races – at Monaco, Silverstone and Spa-Francorchamps, all three of which are in Europe – and call itself “Intercontinental,” either. Maybe the label referred to the international field of drivers, which included such luminaries as Juan Manuel Fangio II, Bob Wollek, David Brabham, Davy Jones and Tiff Needell. In any case, the one-make series provided plenty of edge-of-the-seat action for attendees of those grands prix, with German ace Armin Hahne snagging the $1 million prize by coming home first in the winner-take-all finale at Spa. 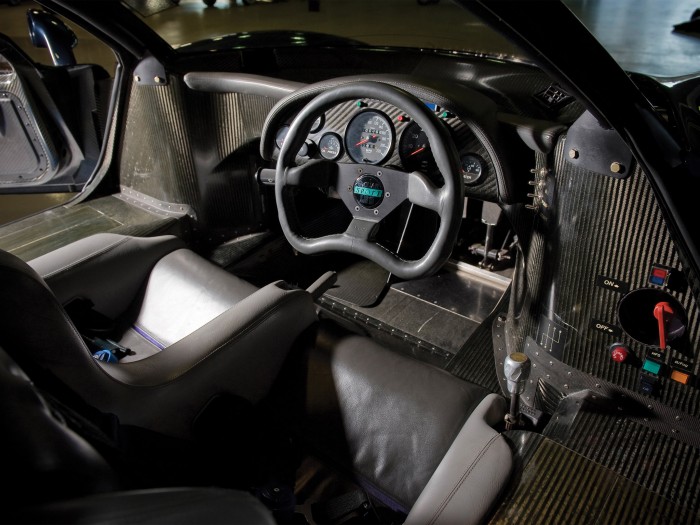 Alas, the XJR-15’s time in the spotlight proved to be quite brief: During the early 1990s it seemed like new supercars were premiering at the rate two or three per week (give or take). Ultimately, most of them never got past the prototype stage due to a major global recession that hit during that same period, though reaching production has never been a prerequisite for generating buzz; consequently, it didn’t take very long for the XJR-15 to become old news. And the arrival of Jaguar’s own XJ220 in 1992 only accelerated the XJR-15’s retreat from the limelight.

But the XJ220 has a dirty little secret. Okay, it’s not much of a secret, but it’s a story that fans of the car would generally rather not talk about. You see, the XJ220 originated as a concept car in 1988, and the calls for a saleable version were so loud and abundant that a work on a production version began in short order. However, in the transition from concept to production, the 48-valve 6.2L V12, all-wheel-drive and Lamborghini-style scissor doors were discarded in favor of a turbocharged 3.5L version of the MG Metro 6R4 Group B rally car’s V6, rear-wheel-drive and conventionally-hinged doors. Needless to say, buyers who put down deposits expecting to one day be able to put a bona fide Limey Lambo in their garage were less-than-thrilled. The irony is that Jaguar and TWR began production of the XJ220 just as they were winding down production of the XJR-15, a car that was arguably more closely aligned with the XJ220 Concept than was the production XJ220.

Only 50 XJR-15s were completed, but its story didn’t quite end there: TWR used an evolution of the XJR-15’s “tub” as the basis for Nissan’s GT1 race car, the 1997-’98 R390. And the XJR-15 appeared in two hit video games: Need For Speed III: Hot Pursuit (1998) and Gran Turismo 2 (1999). Even so, we feel the Jaguar XJR-15 remains one of history’s most underappreciated supercars, and hope that adding it to the Sub5Zero Fantasy Collection will mark a turning point in the battle to change that.