Last December we enshrined the first ten cars of the Sub5Zero Fantasy Collection in our imaginary Garage Mahal. These are the rides we’d procure if we were completely free of such buzz-killing constraints as production status (or lack thereof), street legality in part or all of the U.S. and, most crucially of all, financial resources. Think of it as the fleet Jay Leno would envy.

Now, however, we have a challenge on our hands. Adding to the ten founding members might seem easy enough, but we don’t want to add just any cars to the garage. You see, cool cars of the world, it’s not enough to be expensive, exclusive, good looking or fast; you also need to have a certain “it” factor. Being at least semi-obscure also helps, something that’s rather difficult in the Information Age. But the eleventh inductee fits all of the aforementioned criteria and more…while actually being based on a really well-known model. 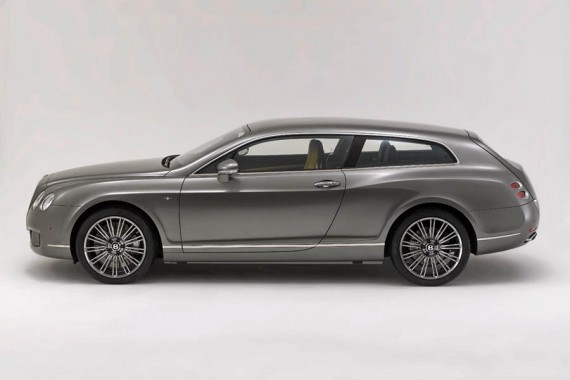 This lusty longroof you see before you is called the Bentley Continental Flying Star by Touring. We know what you’re thinking: “Who in the name of Tinkerbell the Chihuahua would turn a Bentley Continental GTC into a two-door wagon?” The answer, as its name suggests, is legendary Italian design and coachbuilding house Carrozzeria Touring Superleggera, more colloquially known simply as Touring. And a wagon version of a two-door grand tourer or super luxury car isn’t a new or radical concept. Such vehicles are commonly known as shooting brakes, a term that has its roots in traditional English hunting. A proper gentleman would want to drive a car that reflected his station in life and status, but also one that would be able to carry his guns, hounds and other hunting provisions.

While factory-built shooting brakes are few and far between (The Ferrari FF being the only current example we can name off the summit of our skull.), there have been numerous coachbuilders that have constructed shooting brakes out of cars like the Aston Martin DB5, the Jaguar XJ-S and, as seen here, the Bentley Continental GTC. The Continental Flying Star was first shown at last year’s Geneva Motor Show, and you can imagine the stir it caused among the wagon-crazy motoring journalists of the world (ourselves included)…only for that stir to be eclipsed by the stir caused by the announcement that 19 would be built on a first-come, first-serve commission basis. 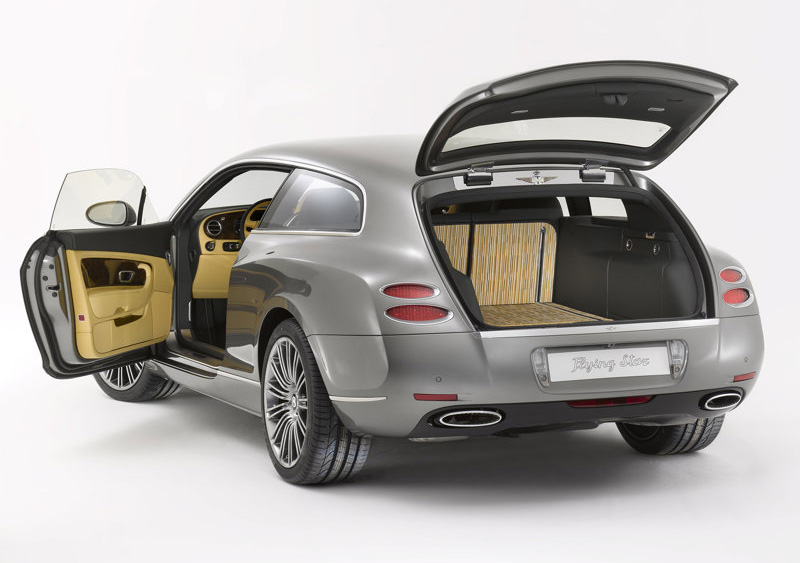 The folks at Touring start by removing most of the Continental GTC’s bodywork from the A-pillars back. To maintain structural rigidity, Touring’s craftsmen add a brace that ties the rear strut towers together while integrating neatly and almost invisibly with the new shooting brake body panels and other structural components. The result is a sturdy unibody that meets (if not exceeds) the same safety standards as the convertible on which it’s based, while adding considerably more cargo room and a split folding rear seat.

But lest you assume all the attention was lavished on the chassis engineering and exterior design sides, the interior is also carefully thought out and exquisitely finished. Customers can pick from scores of different leathers and woods, as well as a nearly infinite array of color schemes. Even the cargo area floor and rear seatbacks are treated to snazzy teak decking. 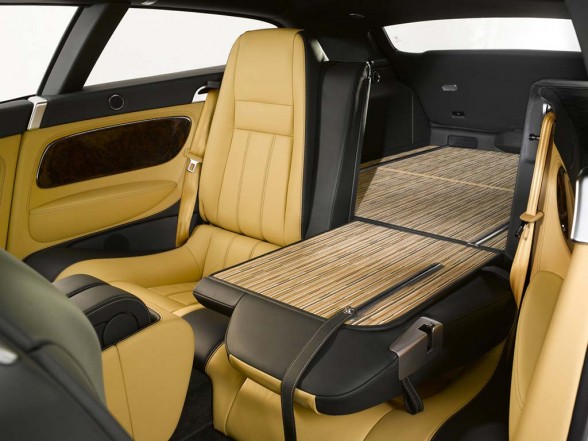 And because it’s still a Continental GTC underneath, you still get a snarling 6.0L twin-turbo W12 (making anywhere from 560hp to 630hp, depending on whether you select the base, Speed, or SuperSports version as the donor car) driving all four wheels through a 6-speed automatic gearbox and a suspension system that strikes a commendable balance between comfort and sportiness. Then again, comfort balanced with sportiness basically sums up the whole car, with a dollop of utility thrown in for good measure. Who says you can’t have it all?