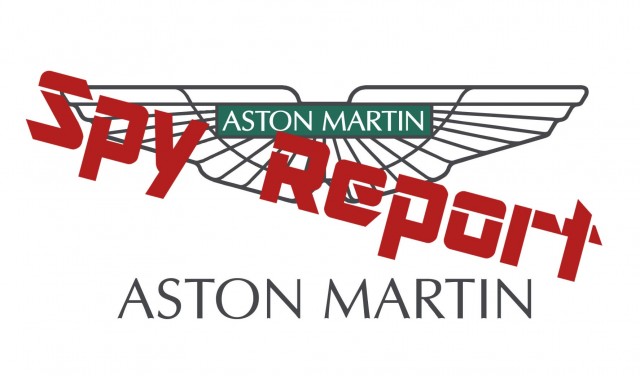 When Aston Martin revealed the Lagonda SUV concept in 2009, the sounds of people inside the auto industry and those who watch it from the outside alternating among gasping, invoking the name of their favorite deity and dry heaving (lots of dry heaving) could be heard from space. Aside from disproving what had to that point been taken as absolute scientific fact, it showed the outside world that the storied British nameplate was at least contemplating adding a 4×4 to its portfolio. It’s just a shame that it had to look like a dog’s breakfast. It wasn’t entirely a coincidence that it was the first nominee on our 25 atrocious concept cars list a couple years ago, you know.

However, Aston Martin is still very much committed to adding a vehicle with oodles of room for people and stuff to its stable. After all, even the Rapide, extra doors and all, is rather intimate for humans at or above average stature. But thanks to a well-placed source inside the company who is feeding intel to us – and only us – we can report that Aston is removing its focus from the SUV and crossover segments (at least for now), and instead turning its attention to a different segment of people and cargo mover. Moreover, it’s doing so with help from a fellow automaker with which it already has a business relationship. 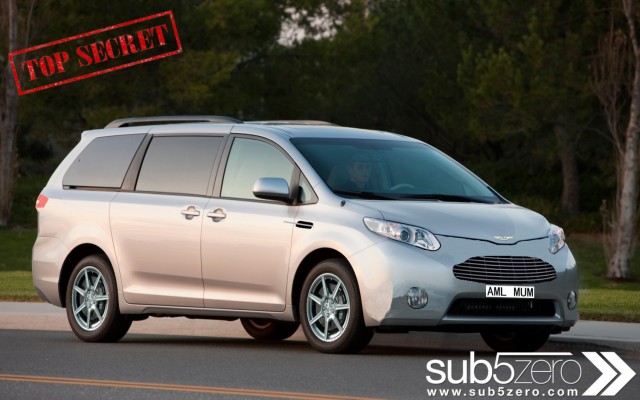 As our mole reports, Aston Martin is in super-serious, super-secret negotiations with Toyota for a deal that would see the Japanese colossus supply the favored car company of Agent 007 with Sienna minivans, which would then be tailored inside and out at Aston Martin’s Gaydon, Warwickshire factory and global HQ to better match the aesthetic and material sensibilities of the brand’s existing models. The list of existing models, of course, includes the controversial Toyota/Scion iQ based Cygnet, the first fruit borne by the Anglo-Japanese alliance.

“The top brass is really chuffed with how the Cygnet program has turned out ,” explains our man on the inside, who wants us to keep his identity under wraps for what ought to be obvious reasons. “They feel that if we can successfully infuse a humble supermini with Aston Martin DNA, then we can infuse any type of vehicle with Aston Martin DNA. And since more and more of our buyers are men and women with children and are leading active lifestyles, a minivan – or MPV as we call them over here – seemed like the logical choice.”

When pressed on why the company is at least temporarily abandoning an SUV/Crossover program (even though Toyota and Lexus offer many nice examples of both), our source said the uppermost echelons of that market are plenty crowded as is. “You’ve got Porsche, Mercedes, Audi, BMW, Cadillac, Lexus, Lincoln, Infiniti, Acura, Volvo, Land Rover and, soon, Bentley, Lamborghini and Maserati offering premium off-roaders,” he says. “Dr. Bez and the rest of the management team feel that we have a better chance of succeeding if we go somewhere the competition isn’t.” 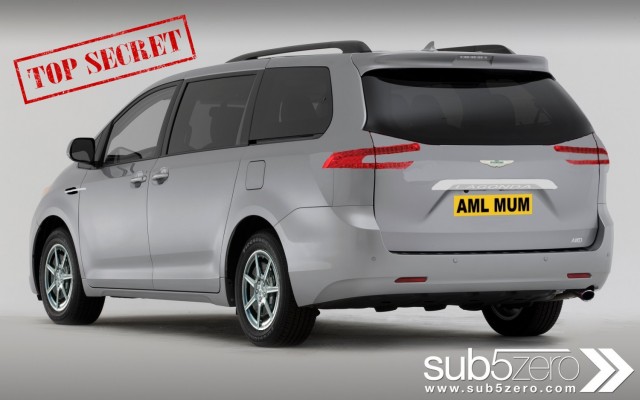 “As for differentiating it from the Sienna, the front sheetmetal will of course be all new and incorporate our signature grille shape. And it will probably have C-shaped taillamps, as well as exclusive wheels. Inside, the dashboard layout will be fundamentally the same, except the gear lever will be replaced by crystal buttons and paddles behind the steering wheel like on our sports and GT models, and the counter-rotating speedometer and rev counter needles. And the dash will absolutely be upholstered in hand-stitched quilted leather and feature the buyers’ choice of wood, carbon fiber or aluminium (or as you lot call it, aluminum) trim.

“The seats will be our own design, with higher quality padding, better bolstering and a greater range of electric adjustability not just for the front two seats, but also power-adjustable second row captain’s chairs. As things stand, there’s a faction within the company that wants a second row bench to be an option, and another faction that wants it to be captain’s chairs only and the option for a combination refrigerator/wine chiller between them. The third row, naturally, will be a power-folding split bench, and the cupholders are designed to be compatible with both champagne flutes and, erm, sippy cups.” 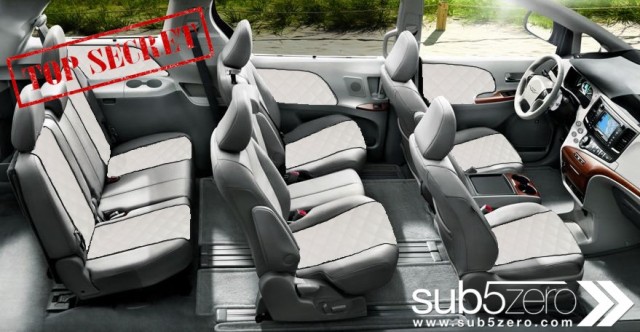 And what about the powertrain? “The stock 3.5L V6 and 6-speed automatic will do just fine,” decrees our narc. “All-wheel-drive will probably end up being standard, since it’s an option on the Sienna Limited and, frankly, the higher-ups are a bit skittish about having more than one front-drive car at a time in the portfolio.” Asked if there really weren’t any reservations about keeping Toyota’s 268hp six under the hood, our sleuth retorted thusly. “Look, if those tossers at Lotus and their devotees are happy with it in the Evora, Exige and E-whatever, then we have every reason to believe our customers won’t feel any differently. Besides, we’ll be fiddling with the springs and dampers so it at least feels faster than a Sienna in the bends.”

That all sounds nice, but what can we expect this creation to be called and, more importantly, when will it be going on sale? Our friend declined to discuss what nameplate the vehicle will wear, though he did offer (rather coyly, we might add) that “the Lagonda name does have a lot of recognition and equity…” And he was able to pin down some specifics about the launch date: “Because it’s based on an existing architecture and uses existing mechanicals, development time will be extremely short. In fact, the current plan is to work right through the summer and have a fully functional prototype ready to show to the public on or about September 31st, with series production to begin roughly six weeks thereafter.”

So there you have it, gang! Mark your calendars for September 31st, and be sure to check in here for all the official info and photos (rather than these semi-convincing photo illustrations our operative sent us) of the vehicle that is sure to turn the high-end car market on its head. We can’t wait!