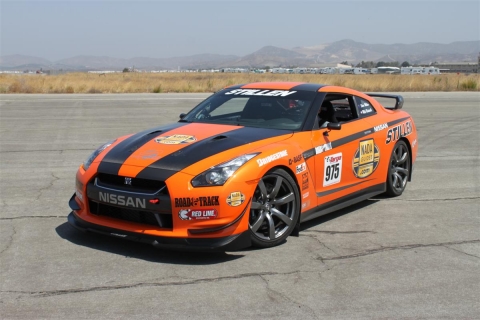 Steve Millen was a stalwart road racer back in the day. However, after hanging up his helmet, more recently he has been focusing on modifying street cars. His company STILLEN is well known for its tuning prowess and has been doing quite a bit of work on Nissan models of late. For the last six months, he and his crew have been working on a new project to create a Nissan GT-R for the 2009 Targa Newfoundland Rally which runs from September 12th to 19th.

We’ve been following the progress of this car on Stillen’s blog which has detailed its every step. The car is now completely finished and has been transported across the country. Currently sitting in Maine, the Stillen R35 Nissan GT-R is just waiting for Steve Millen to drive it the rest of the way up to Eastern Canada.

Before this journey took place, the Stillen Nissan GT-R race car was put through the paces at El Toro Marine base in California. Road & Track was there to observe its performance and it recorded some impressive runs. Stillen’s Godzilla was able to sprint from 0-60 mph in a mere 2.9 seconds and hit the 1/4 mile in 11 seconds flat at 127.9 mph. Lateral grip was pegged at 1.1g, enough to make even fighter pilots raise an eyebrow. The best 0-130 mph time recorded was 11.4 seconds.

The Stillen R35 GT-R Targa benefits from a host of weight saving and performance modifications. Final figures peg the car at 620 horsepower at 15 psi with help from the dual turbochargers. The interior was stripped down as much as possible, lightweight racing seats were swapped in and carbon-fiber components were used throughout.