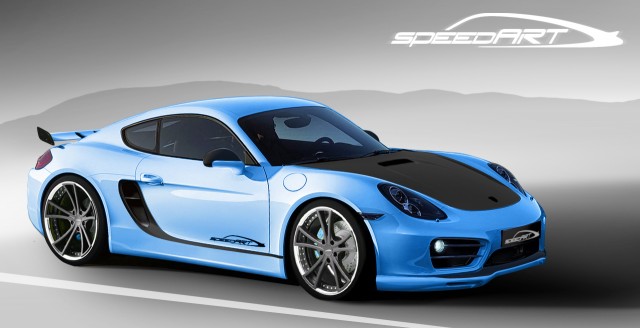 Some of us here at S5Z are of the philosophy that Porscheshould make one car, and one car only: the 911. It’s the Richard Hammond School of Thought, where you walk into a Porsche dealership, say you’d like to purchase a car and are then given a choice of color. And that’s it.

Fortunately for the rest of us, Porsche has continued to expand their lineup, producing the Boxster, Cayenne (which floated the company to financial stability), and more recently, the Cayman. While the Cayman slotted perfectly in-between the Boxster and the 911 in all aspects, renowned German Porsche tuners SpeedART saw fit to move the Cayman up a few performance notches. And by a few notches, we mean a few significantly large notches. Welcome to the SP81-CR. 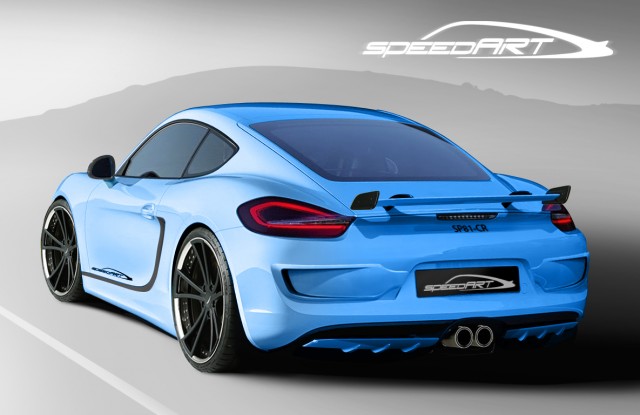 Announced for release at the Geneva Motor Show in March of 2013, the SP81-CR program will be based off of the 2013 Cayman. Customers who choose to submit their Cayman to the tuning program will have the option of adding unique SP81-CR exterior and interior pieces, wheels, suspension, and naturally, power packages.

While the 2013 Cayman is no slouch, boasting some 275HP in base form and 325HP in “S” trim, the stage 1 SP81-CR package boosts the little midship German coupe’s power to 345HP. Stage 2 and 3 further increase the power to 360 and 400HP respectively. Unfortunately, as of now, no details have been released about exactly how those power gains will be achieved, but we’re pretty certain we can expect some form of forced induction and ECU re-tuning. We did say significantly large notches didn’t we?

As for exterior trim, carbon pieces take over for the side vent panels and SpeedART designed front and rear bumpers to replace the stock pieces. A small wing spoiler is also one of the options, but personally, it’s one of the options we’d leave off – along with the 21 inch two-tone LSC-Forged wheels. We’ll take the twin-pipe exhaust and adjustable sport suspension though. Now all that’s left to do is play the waiting game…