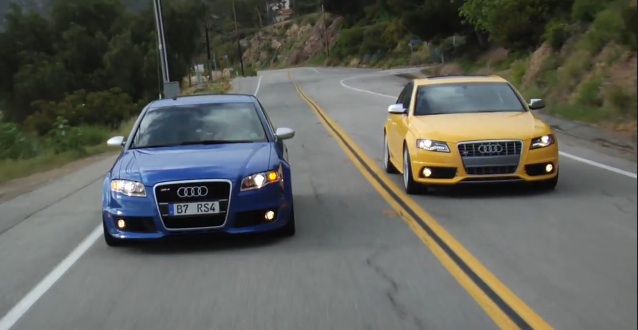 We’re constantly comparing cars here on Sub5zero. Be it a new coupe that we test against its predecessors, or a super sedan shootout, our quest to pit cars against each other and give you the honest word is never-ending. The new Audi S4 won our hearts enough to place in the Top 5 Sport Sedans with BMW’s 550i and the Jaguar XFR, but what about against its own flesh and blood?

This week The Smoking Tire does just that. In a super-sedan shootout Matt and Craig take Audi‘s new light-weight 4 door coupe-slayer, the 2010 Audi S4, and pit it against its big brother, a 2007 Audi RS4. Like an annoying teenager, the S4 is younger, thinner and has more gadgets. But don’t count the RS4 out just yet. With that big V8 up front that’s deserving of a performance at Disney Concert Hall and famous “RS” suspension, it’s got more weight behind its punches. Make the jump to watch the newest episode and find out if Audi made the right choice dropping 2 cylinders for it’s new hot sedan.