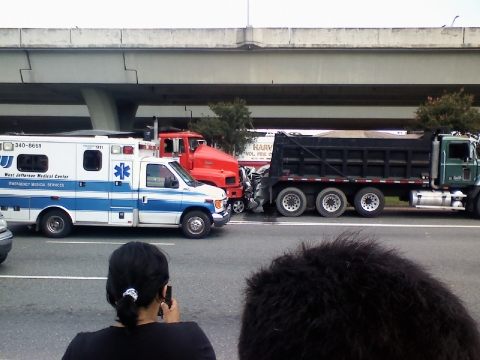 This morning in our inbox we received this little bit of grim humor. The photo is supposedly of a wreck in Jefferson Parish, LA (just outside New Orleans) between two trucks and a smashed passenger vehicle titled “Still Want A Smart Car?”. We doubt it is that particular make based on the wheel and a couple other visual cues but this picture does make one wonder about the safety of the Smart Car (whether or not it’s actually the car shown) as anybody who has seen one in person has definitely had their reservations. So, we decided to satisfy our curiousity and find out a little more about this little spark plug. 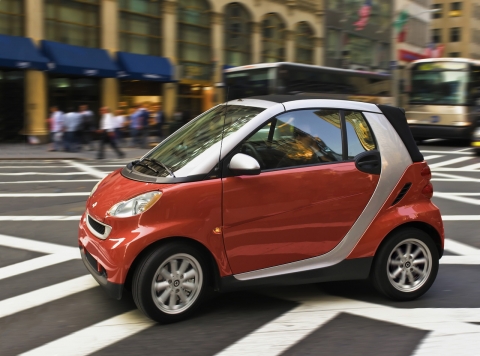 The Smart ForTwo is manufactured by Germany’s Daimler AG and distributed in the US by Penske Automotive Group which created a special independent network of dealerships outside of Mercedes. The cars were officially available in early 2008 and quickly became extremely popular, with a base model price of $12,000. Possessing a curb weight of only 1,808 pounds and a 70 hp, 3 cyclinder engine, the ForTwo is able to get 33 mpg in the city and 41 mpg on the highway (based on 2008 EPA ratings).

Amazingly enough, when the Insurance Institute for Highway Safety (IIHS) tested the Smart ForTwo, it did receive their highest rating for side and front impacts. However, it fell short on whiplash protection, one of the most common injuries. Smart USA was looking for a Top Safety Pick designation to assuage all fears and concerns over its petite frame but the IIHS nipped that in the bud when spokseman Russ Rader made it clear that even though there is not a specific size requirement, the ForTwo is “just too small to be considered safe under all driving conditions”. In fact, the ForTwo is the smallest car ever tested by the IIHS and is classified as a “microcar” due to the minimal crush space on the front end.

The National Highway Traffic Safety Administration (NHTSA) conducted their own tests which also illustrated some room for improvement. ‘Five Stars’, the top rating, was awarded for driver protection in the front crash test but passenger protection was given only ‘Three Stars’, a pretty low rating that most vehicles never see.

Both the NHTSA and the IIHS did give the Smart ForTwo top ratings for side impact collissions. However, both times the doors became unlatched during the test. While not ideal, it didn’t actually affect the test results.

In general, cars that are bigger and heavier are always safer than smaller, lighter vehicles. And during real world driving, if a small car like the Smart ForTwo was, to say, have a frontal collision with a large vehicle like the Chevy Tahoe, the occupants of the Smart Car would experience much greater crash forces. And yes, the image above may be an extreme example of a small car being particularly vulnerable in a wreck and I don’t know of any car that would have faired particularly well against two massive trucks like those in the picture.

In any case, this car is ideal for congested cities and those looking for an inexpensive vehicle with great gas mileage. Only time will tell if it’s able to sustain itself in American society where bigger is always better and perception is everything. I just wish that the city of Los Angeles would pass some regulation that allows Smart Car drivers to park perpendicular without getting a ticket. Because that, to me, is worth the price of admission.

** Update: One of our readers has informed us that the car shown in the picture was not actually a Smart ForTwo as the e-mail suggests but a Ford Escape. Because the crash was off-centered, the driver’s side wasn’t nearly as badly damaged, and although briefly hospitalized, the operator did survive the crash. ***