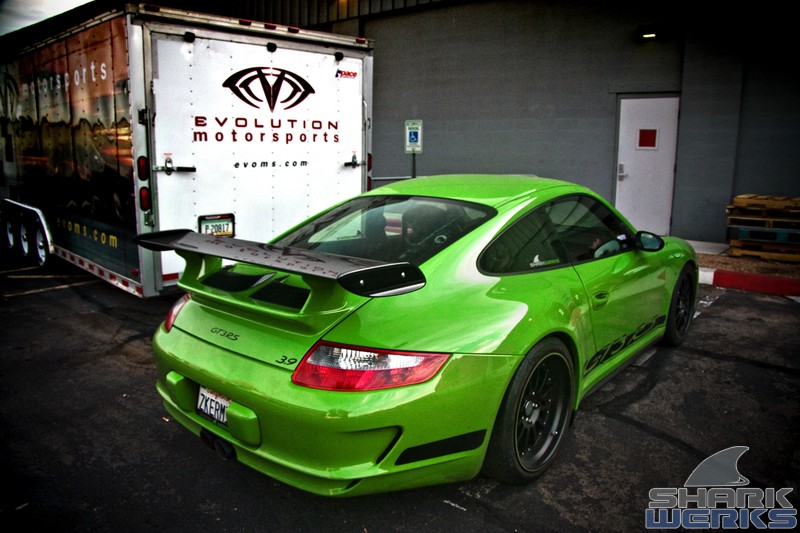 Sharks are a formidable foe, often unseen until it’s too late when they unleash their fury and force with devastating affect. And that image is perfect for a tuning company that has quietly been lurking in the community of Fresno, CA. For a few years SharkWerks swam under the radar, building custom exhaust systems and putting out short teaser videos to showcase their sound. Then they built some lethal Porsche turbos, including one for New York Giants receiver, and Super Bowl veteran, Amani Toomer. They did such a good job they are licensed to install parts from TechArt, Cargraphic, and Evolution Motorsports. So they were circling the auto world, just a fin coming up out of the water from time to time. But this summer they showed what they’re all about by building a killer “bored and built” 3.9L 500 HP Porsche GT3RS.

The number “3.9” may not mean much to you yet, but “GT3RS” should ring a bell. In 1999  Porsche built a lightweight version of its Porsche 911 called the GT3. It was a car for the driving purist. You want a car that goes fast and turns well? That is exactly what it was, and nothing more.  It came with no A/C, no stereo, no back seats, no BS. It came with a humble 355hp, but weighing only 3,000 pounds it was no slouch, hitting 60mph in 4.5 seconds. But the key was in the handling. It measured 1.03g on a skid-pad, a number that cars rarely achieve today no matter how Italian their parents are. Porsche then built the RS version of the GT3, using carbon fiber to save weight, changing the suspension a little and adding Carbon Ceramic brakes. That car was able to lap the Nurburgring in the same time as a Lamborghini LP670, which has a 300hp advantage and AWD. No wonder Jeremy Clarkson hates “the beetle” so much, it makes his favorite Italians look bad. And that was the old model.

It has only gotten better since then. Porsche was able to keep the weight the same, but packed on more power and better suspension. The 997 GT3 RS came with a naturally aspirated, 3.6 liter motor making 415 horsepower and 300 ft. lbs of torque. Make no mistake, this is a fast car. In 4 seconds flat you are passing 60 MPH and on your way to 193, keeping up with competitors from Italy, Germany, Japan and America.

SharkWerks didn’t care. They don’t care about how good it is, because they were fixated on how good it could be. They knew it was flawless in the corners, and it was damn fast, but couldn’t shake the thought of that car with more power.  So, in a building in quiet Fresno, CA, surrounded by 3 star hotels and strip malls with more coffee shops than stores, SharkWerks began to tear down a green 2010 Porsche 997 GT3 RS and build the ultimate driver’s car.

SharkWerks has been building fast Porsches for awhile now, installing parts that come in boxes labeled; “TechArt”, “Cargraphic” and “EVOMS.” For this build they collaborated with Porsche tuning heavy weight Evolution Motorsports. SharkWerks wanted to make sure the essence of the car remained, something I tip my hat to. When you look at it, there’s almost nothing to giveaway the fact that it’s different than a stock lime green GT3 other than a tiny “3.9” sticker on the back. The loud exhaust might be a give away, but only to the trained ear. It’s still a GT3RS. And they didn’t want to go for easy power by bolting on a turbo or putting a silly blue bottle in,  those would change the nature of the car.

The Porsche GT3 has always been a naturally aspirated screamer that uses high revs and higher compression to create its power. So how were they going to get the power? Well the saying goes, “There’s no replacement for displacement.” Generally you hear it from old-timers, or worse, V8 fan-boys trying to explain why a top-fuel dragster is a better car than an Evo. No matter how annoying the source of those words may be, they carry some truth. The GT3 engine is already high-strung, redlining at 8400RPM, so to get more power requires more volume. They bored the cylinders, and put in new pistons to raise compression to 13.5. They balanced the rotating assembly, used stronger head studs, and more aggressive cams. After the shiny bits were torqued down, they let the tuning gurus of Evolution Motorsport fine-tune the ECU.

I have to say, after watching the video below, my respect for EVOMS has only been reaffirmed. They ended up with 500 horsepower at the crank, matching or besting the power of those cars generally held on a higher pedestal than the Porsche 997 GT3. But they didn’t just strive for maximum horsepower, they wanted a highly usable power-band with improvement throughout the rev range. Mission accomplished. They didn’t lose any power or torque anywhere. The gains in the midrange, at 6000 RPM, were 58WHP/50Wtq. Up high, they went from 382WHP to 457. And after the power peaks at 7600RPM, you can bring the engine to an engine mount vibration-testing 8800RPM while only losing 8hp. Imagine being in a corner at 7000RPM and knowing you have plenty of room in the power-band to pull you out onto the next straight.

The evidence of how usable this power is lies in the video below. In a race against a stock GT3RS, the SharkWerks car quickly puts the distance of a city block between it and the factory car. It pulls hard through every gear, and a lightened flywheel allows the car to get into its power band quickly. This will help the car pull out of the corners, and as a bonus it will be easier to drive on the street. Throw in the sound of that flat-six howling through SharkWerks’ own Cup-Spec exhaust, and this car moves up to its own pedestal. It has the handling other cars strive to replicate and the power to hang with the big kids on the straightaways before it out-brakes them in the corners. It’s not a Great White, it’s a Mako. Capable of lightning-quick direction changes and lethal bursts of speed. Imagine going to a track day and pulling behind some oblivious lawyer in his new silver (ohh how original!) 997 Turbo in this Kermit Green RS. You would give him a nibble when you out-braked him, and then chomp on his ego as you pulled away down the straight away, the wail of a high-strung NA engine haunting his dreams for weeks.

I think SharkWerks and Evolution Motorsports worked together to put out something phenomenal. A lot of companies say “We’re taking it to the next level!” And like any juiced-up pro wrestler, they overdo things and destroy the essence of what was once a great car (I’m talking to you camo-covered Ferrari). A Porsche 997 GT3 RS doesn’t need to be lowered 2 more inches, given 1000HP, and painted with expensive paint made from the tears of baby seals. It’s low enough, its paint is unique enough, and its hips are already mistaken for Kim Kardashians. SharkWerks did only what was necessary, and nothing more. Sure there’s faster cars out there. But if you want to connect to the road at a level rarely experienced, and feel excitement every time you turn, brake, or accelerate, this is the car for you. It is a “driver’s car” in every sense of the word.