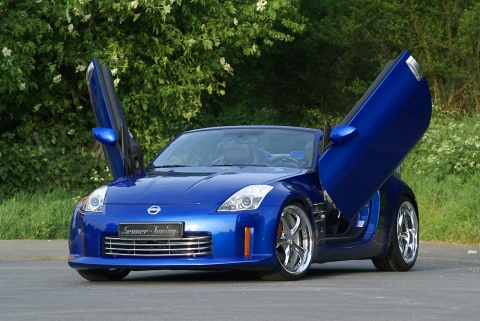 The performance specialists over at Senner Tuning have just released a new styling package for the Nissan 350Z Convertible with various options including both exterior and interior enhancements. The first thing that really pops out at you is the aerodynamics kit of the Senner 350Z THUNDER, which includes a much larger rear spoiler than stock along with some Lambo-style “LSD” doors. The Senner Nissan 350Z is also outfitted with plenty of chrome which finds its way onto the grill, gas cap and all emblems.

The Senner Nissan 350Z includes a power pack for the 3.5 V6 engine (301 hp stock), which boosts engine output to 338 hp. The performance increase comes from engine management software optimization and the help of a Carbon Airbox and new sport exhaust system with titanium tailpipes. The Senner THUNDER has a lowered suspension and rides on 20″ Work VS-KF alloy wheels measuring 20×9 up front and 20×10 in the rear. Unfortunately there are no performance figures available yet on the Senner 350Z THUNDER.