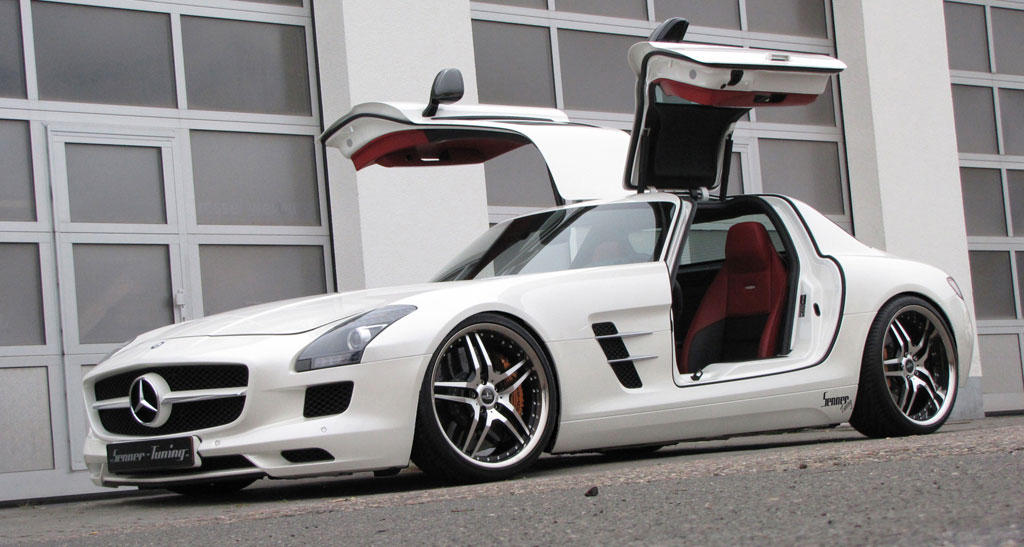 While some might dismiss the Mercedes-Benz SLS AMG as a Teutonically-icy (save those flamboyant doors) grand tourer, the reality is it’s thoroughly capable junior supercar that’s more than capable of going toe-to-toe with the likes of the Audi R8 V10, Chevrolet Corvette Z06 and Porsche GT3. And as we’ve seen in the last year or so, the tuning community is well aware of the 21er Jahrhundert Gullwing’s inherent performance potential. Senner Tuning is just the latest aftermarket outfitter to jump on the SLS bandwagon.

Unlike many tuners, the Senner folks have left the bodywork of this white lightning bolt alone, other than the fitment of carbon fiber sideview mirrors and some small Senner Tuning decals on the rocker panels. Virtually all the visual impact comes courtesy of the crouching stance created by the KW Variante 3 adjustable coilover kit and the special stainless steel and diamond black 20” Vegas wheels from Aerotechnik’s Corniche line (Nine inches wide in front, 11 inches wide in back.) that fill the wheel wells like a narcoleptic waitress fills customers’ coffee cups: To the brim, and maybe a little beyond. 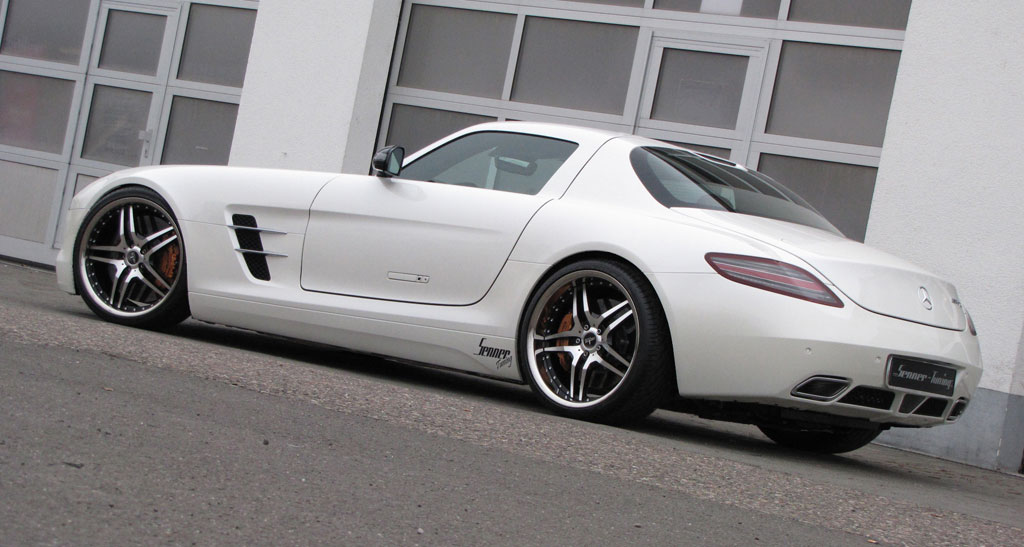 But this bodacious Benz hasn’t just been modified to look cooler; it’s also a skosh quicker thanks to improved breathing. There’s a high-flow intake system at the 6.2L V8’s mouth, while its ass now has a less-restrictive exhaust system with butterfly valves bolted to it, and its brain has been reprogrammed. The result is an additional 35hp and 30 lb.-ft of torque, for a grand total of 606hp and 509 lb.-ft. If the stock SLS doesn’t wow you with its ability to bring the horizon to just out of your reach with the stomp of your right foot, an SLS with those Senner pieces installed should at least elicit a smirk of amusement.

Senner doesn’t say how much all of the upgrade parts seen on the car seen here will cost, but we’re guessing the tab would get you most (if not all) of the way to a certified pre-owned C-Class. But unless you have a college-age daughter who is threatening to elope with her poetry slam veteran/Phish roadie boyfriend if you fail to present her with a W204 C300 Sport on her birthday, there’s absolutely no reason not to spend those shekels on hopping up your SLS instead. After all, until science can prove otherwise, you only live once…