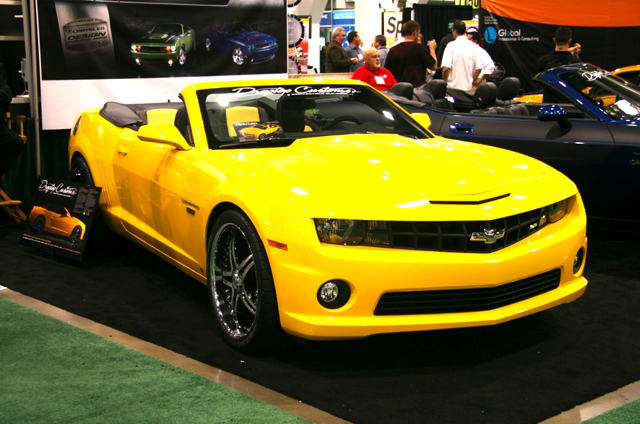 Just can’t wait for GM to release a convertible option for the new Chevrolet Camaro? Then feast your eyes on the Drop Top Customs Chevy Camaro SS Convertible. When the new Camaro came out people went nuts. Everyone loves 60’s muscle cars, and the retro look has been hugely profitable for Ford. So it was only inevitable that a revitalized Camaro would emerge on the scene.

The old Camaros were one brand of the car that truly deserved the term “bad ass.” They just looked sinister. The new Camaro is no different. It has the same burly curves, low canopy, and headlights that seem to be on the look out. It’s like the car is up to no good. As a convertible the classic Camaro was really two cars in one. With the top up, it kept the “angry” look. With it down, it was about fun, sunny days and car cruises.

As good as the Chevy Camaro Convertible Concept looked when it came out in 2007 and as popular as it was, GM has understandably had their hands a bit full. Originally, they were not sure there was a need for a Camaro convertible. So they wavered for a bit. To quote Drop Top Customs’ Jeff Moran, “Nobody needs what we make. They just want it.” So Drop Top Customs took the wheel and gave Camaro fans another way to enjoy their favorite SS. They did what hot rodders do– measured twice and cut once with a Sawz-All. Then they built the frame for the top on the car, keeping the roof height low like the coupe.

$18,000 later and top-down motoring is no longer a Mustang monopoly. The new Camaro still looks great as a convertible,  which can’t be said for every vehicle (PT Cruiser Anyone?) The Drop Top Customs car came out well. The top keeps the low Camaro-ish profile when up, although the canvas could be tighter. With the top down the car still holds its image. Sometimes a convertible can look awful. It can ruin the lines of the car. The Camaro was, and still is, a car that looks great in any form. Kudos to the GM designers for that.

I only see 2 problems for Drop Top Customs. First, the leather that covers the top when it’s down has to be snapped in by hand. Today a good convertible has some sort of clam-shell cover the seals up automatically. The concept had it. Second, GM has announced a March 2011 release of a Camaro Convertible. Their top will probably function better, and they also designed the car as a soft-top from the start, so it just looks cleaner. But if you are a Chevy fan, love the sun and have $18,000 sitting around, you don’t have to wait.