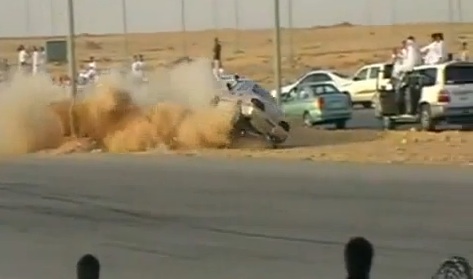 If you were walking through the woods and saw a grizzly humping a moss covered log, you would give it more attention than if Jesus came down from the sky holding the next iPhone. That’s what a car crash is; unexpected, wrong, but amazing. In the middle east there’s not a lot of motor sport. They love cars almost as much as we do, but it appears their city planners were only given a ruler, because I’ve never seen any evidence of a curvy road on YouTube.

So what would you do if all you had were arrow-straight roads? Some of us would do highway pulls all day long while those of us that love doritfto would find an old RWD car and carve rubber esses down the highway. Others would be all about burnouts and drag racing would be as rampant as HPV. But I don’t think anyone would think to jump in a Toyota Sienna or Nissan Sentra, drive towards their friends at 110mph and then yank the e-brake. That’s the recipe for whatever it is these sedan-stricken daredevils do. They rip down the road, send the car spinning, and just hope (or assume?) it’ll all end well. It won’t, and it doesn’t. Check out the video after the jump of when even 3 lanes wide isn’t wide enough. Maybe our troops can bring a highway patrol car over in the next cargo plane?