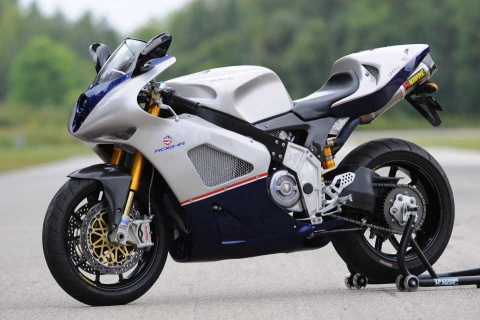 Some pretty amazing motorcycles are starting to appear on the bike scene both for international and domestic markets. And this is one that slipped through the cracks. The 2009 Roehr 1250SC is an exotic superbike that has all of the technological advancements and excellent componentry you’d find on an Italian superbike, but, is surprisingly produced in the US. Not only is it the quickest and fastest bike that you will find built in America, it is also the most powerful with 180 hp engine mated with a 5-speed manual gearbox. 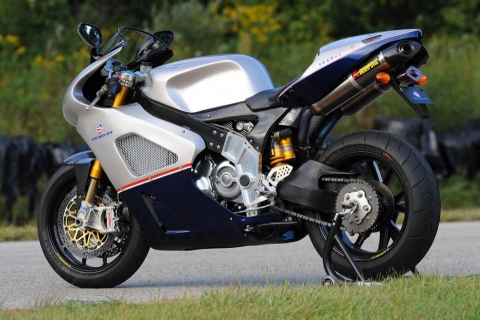 So where does all this juice come from, you ask? A liquid-cooled, 8 valve V-Twin variation of the Harley Davidson V-Rod VR1000 engine was modified with help from both HD and Porsche AG to come up with a reliable, efficient and particularly strong power plant. To step things up even further, Roehr incorporates a special Rotrex centrifugal supercharger unit to give their superbike class-leading power delivery that is both broad and linear. 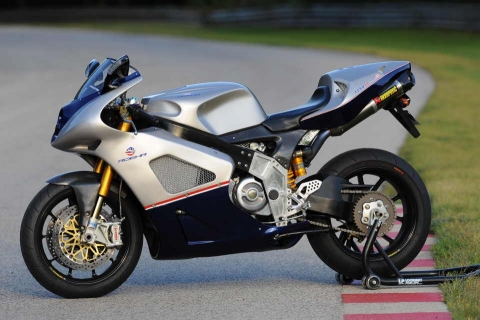 Essentially operating like a belt-driven turbocharger, this supercharger pushes pressurized air through the intake system in a manner that is proportional to engine speed. When the bike is idle, just cruising or decelerating, unneeded air is actually recirculated through a bypass valve that allows the engine to perform as if it was normally aspirated. 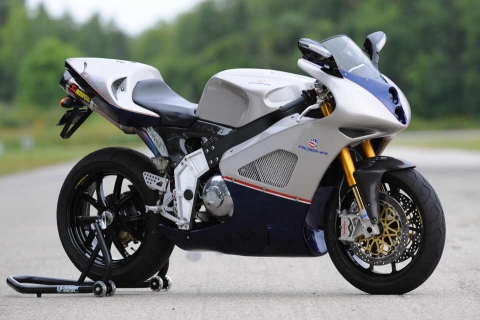 The Roehr 1250SC has a dry weight of 432 pounds and rides on an Ohlins suspension system with a 43mm adjustable upside-down fork up front and a linkless monoshock in rear. The brakes are sourced from Brembo and feature 2 semi-floating discs with 4 piston calipers at the front wheel and a single disc with 2 piston calibers in back. The exhaust system consists of dual underseat Akrapovic mufflers with quieting inserts.

All told, 50 units of the Roehr 1250SC will be produced at a cost of $49,999. The pricing of this bike is questionable but you really do get an amazing performance machine. Strangely enough, I think you actually may be paying more because it’s American. A little bit of patriotic price padding… Just for the sake of comparison, the 2009 Ducati 1098 R Bayliss LE lists for only $43,995 and provides the same 180 hp and top-notch components but with access to 6 gears instead of just 5 and weighs in at 68 pounds less.