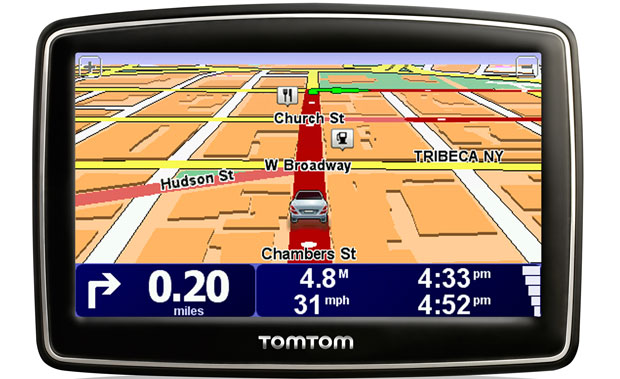 Accord to Jocelyn Vigreux, president of TomTom Inc, “The XL 335S offers first-class navigation at a competitive price point. It allows drivers to take those routes that only well-informed locals know, reducing the stress of not knowing where to go and when you will arrive. In addition, our Advanced Lane Guidance feature gives drivers the information they need to drive more safely and more confidently when traveling through complex road junctions.” That summation is actually not that far off, but the devil is in the details.

The TomTom XL 335S has a sleek design and is both lightweight and easy to handle for swapping between vehicles or carrying by hand. The interface is clean and inviting even for those technically challenged. And the unit has a host of functions to handle just about any scenario. The visuals on the 4.3-inch widescreen display are bright and crisp, with good contrast and the cues are easy to follow and much less confusing than in the past.

For the most part, entering in a destination is as easy as choosing the state, city and street, and then entering the address. The unit remembers your previous addresses which makes finding past routes a cinch. They don’t stay forever so it’s best to make a destination a ‘favorite’ if you plan to go there more than a few times. The TomTom seems to have no problem locating satellites ever and jumps to attention.

Unfortunately searching for particular points of interest – restaurants, shops, etc – is unneccesarily challenging. For example, this TomTom unit provides lists of locations for chains, but no way to really identify which one you are looking for. The distance from your current spot is the only information provided and it would be much more helpful to show a city and street. You actually have to click through each icon individually which is very annoying and almost impossible to deal with while attempting to drive. The points of interest database could definitely use some more love. 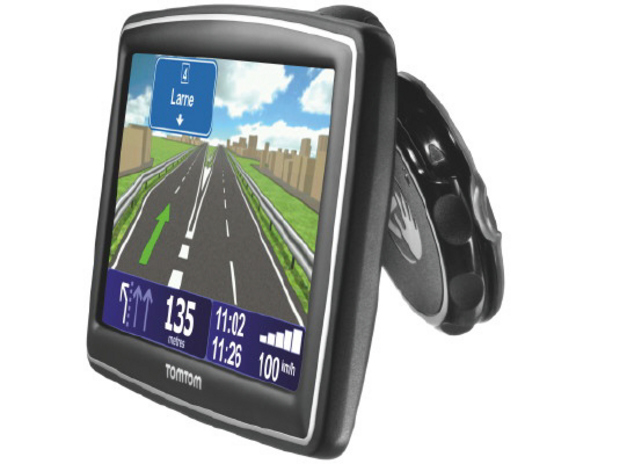 In addition, the touch screen functionality left a little to be desired. It is often one step behind, moving quite slowly compared with other touch screens like the Apple iPhone. The characters are also bunched up and difficult to tap correctly the first time around. It takes patience and plenty of practice to get it right. During daytime hours in brilliant sun (note to convertible owners), the screen does have a tendency to become washed out and difficult to read, but we have yet come across a GPS unit that has been able to overcome this obstacle. During normal operation it is totally fine and at night it has a cool color pallete of brilliant blue hues.

TomTom’s navigation has some great features to take the guesswork out of using satellite navigation. Many units still make you look like an indecisive moron on the roadway or cause people to question your intellect when you tell them you got lost on the way when you clearly have a GPS unit mounted in your window. The TomTom 335S XL will definitely save you that kind of embarrassment.

Lane Guidance makes sure you don’t miss a turn or go careening across three lanes to make a right turn. As you get to a convuluted or complex intersection, a nice 3D image removes the confusion by demarcating the lane you should be taking. And on the highway, even though you still get the annoying voice that says, “keep to the left, then… keep to the right”, followed by “keep to the left” you can visually see the lanes you should be in, which are clearly identified. 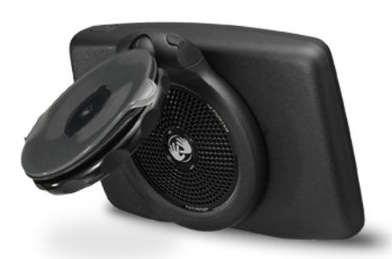 Getting off the highway is a little more of a challenge. One nice feature would be if the unit would pan out the map when exiting the ramp to get a better sense of which turning lanes to target, since simply dispaying left or right arrows doesn’t quite do the job. For example, many cities have complex roadways where there may be both a soft or hard right with set lanes, which requires quick reaction times.

TomTom also offers something called IQ Routes which leverages data from millions of users to calculate routes based on actual traffic speeds and not just the posted limit. It also chooses the most efficient routes taking into account time of day and typical traffic congestion. This feature actually works as advertised, often avoiding short highway routes during rush hour in favor of surface streets, and creating some interesting shortcut experiences as it weaves around in sometimes, at first, questionable ways.

Overall, this is a great “budget” GPS device with plently of features and functionality to get you where you need to go. The TomTom ONE XL 335S definitely falls short in several areas which could make life much easier. Personally, I didn’t really like the 2D and 3D navigation screens, although  there is nothing fundmentally wrong with them. All of the options for daytime hours seem a little outdated and I yearned for nightime navigation. The USB power cable never seems to want to seat properly and I had to wiggle and jam the plug into an especially deep socket. And the brilliant idea of providing a mechanism to pop the screen in and out of the window-mounted holder seems self-defeating as I felt like I needed super human strength to snap it firmly in place.