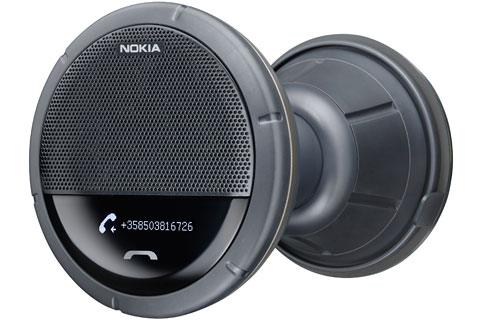 With many of the municipalities throughout the country starting to enforce cell phone regulations mandating hands-free use, if you don’t have a headset, either wired or wireless, you may want to consider a Bluetooth speakerphone for your car. Well-known Finnish handset maker Nokia is now adding to their cache of accessories the HF-510, keeping you compliant and talking in style.

The Nokia HF-510 comes complete with everything you need to get going in any way you see fit by including a sun-visor clip, easy suction mount for the windshield and plate for the dash. Also, a super thick manual is provided, but don’t be alarmed, there are only about 20 pages of instructions in English (but since Nokia is international they have tons of other languages included as well).

Once you have chosen a location and the unit is ‘installed,’ you simply sync up your Bluetooth-enabled phone and the speakerphone and you are good to go. You may be thinking, “I get it, enough said”, but this device is laden with some extremely useful features.

A small but intuitive OLED display provides enough information that you really don’t have to ever look at your phone and keeps you updated with any actions taken along the way. Inbound calls show caller ID with contact name and phone number and the device can also dial out via voice commands. You can even copy over your address book with up to 3 numbers per contact (depending on what type of Bluetooth profile your phone supports).

It’s great to have lots of features but if the sound is fuzzy or too soft, who cares, right? In this case, the Nokia HF-510 has more than enough volume, overcoming a common complaint with this type of device, and provides fidelity that is static-free and distinct. The volume can be increased or decreased according to your audible sensitivities.

The Nokia speakerphone is powered by a non-removable but rechargeable battery that takes 2 hours to fully juice. When charged, the device beeps and a battery icon indicates ‘full’. The HF-510 provides 180 hours of standby and 30 hours of talk time, allowing for long periods between charges unless you’re Ari Gold. The unit does have an on/off toggle and battery saver function which cuts off after 30 minutes if no connection is made.

All in all, the Nokia HF-510 is a solid performing device with enough features and functionality to comfortably make the switch to hands-free talking in your car. The Nokia HF-510 can be had for as little as $60 at plenty of reputable online merchants.