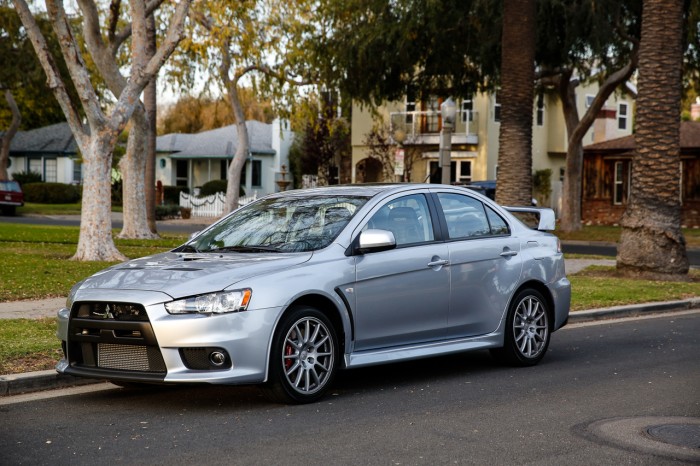 Since its debut in 1992, the Mitsubishi Lancer Evolution has been tightly tethered to its racing heritage, maybe too much so depending on your perspective. On the motorsports side of the equation, the Evo (as enthusiasts have dubbed it) has been one of the most successful platforms in the world for rally racing. On the consumer side, the Evo has been a serious high-performance compact sedan targeted at driving enthusiasts, but with quickly diminishing appeal. The price tag ($35,000+), polarizing styling and lack of interior accoutrements have relegated it to the weapon of choice for a small subset of the population who truly understands the car’s extraordinary attributes and are willing to look past some serious omissions. 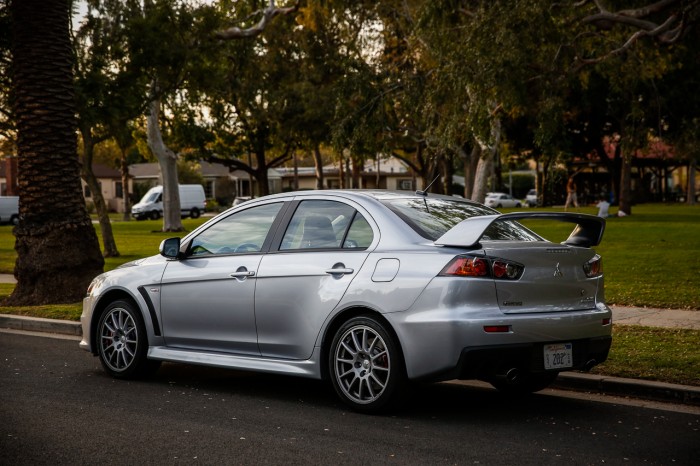 The new 2014 Mitsubishi Lancer Evolution GSR remains largely unchanged since the tenth generation changeover in 2007. New standard features include a 6.1-inch touchscreen display with a poor layout and slow responsiveness along with the now ubiquitous HD and Sirius XM radio. 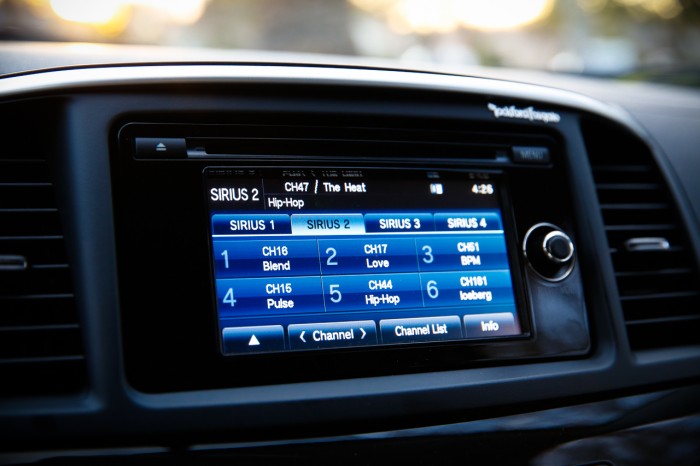 The trims are still the familiar GSR with the five-speed manual gearbox (our loaner) and the MR, which offers a paddle-shifted twin-clutch gearbox. Despite claims that the Evo X is not as hardcore as the Evo IX, one trip around the block will quickly have you convinced otherwise. 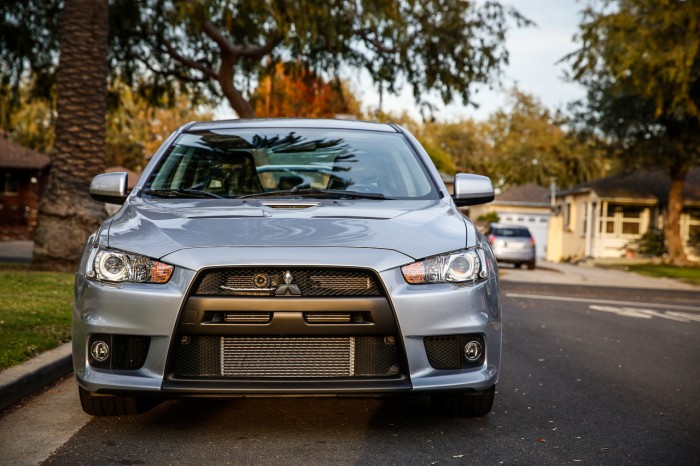 The Evolution GSR manages to find the perfect combination of driving dynamics to move the soul. It offers rapid acceleration, amazing grip, impressive stopping power, extremely quick turn-in and nimble handling. There are cars that are stronger in any one of these categories but not across the board at this price point. 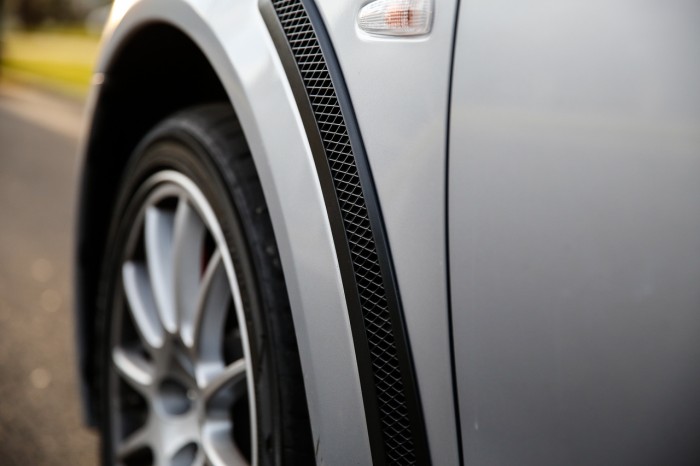 In fact, along a curvy stretch of asphalt, especially in rain or less than ideal road conditions, the combination of all-wheel drive, communicative steering and short wheel-base, affords the Evo a sure-footedness and finesse that is unrivaled. The advanced all-wheel drive system is marvelous and as such, handling and traction are stellar. 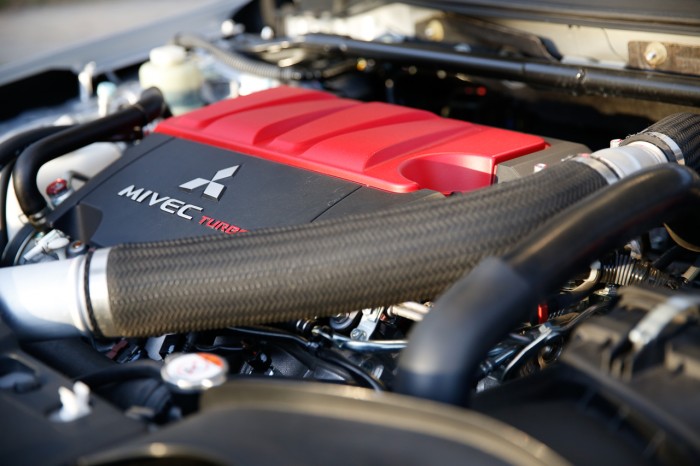 The five-speed manual transmission is surely dated but is definitely up to the task. It works well with the 291hp turbocharged four banger, which propels the car from 0-60mph in just under 5 seconds. The 300 pound-feet of torque provides a nice kick in the butt and with all four wheels working in conjunction, the Evo is able to put the power to the ground.

That said, the gearbox is notchy and the clutch pedals are stiff, so you do really have to work at it to get everything synced up properly. Once you do and the engine winds past 3,000 rpm, you are rewarded with a throaty exhaust note and wonderful turbo whistle. Unfortunately, a tightly geared 5 speed manual transmission lacking a 6th gear does not do any favors in the fuel economy department; the Evo GSR is rated at 17 mpg in the city and 23 mpg on the highway, which appears to be only possible if it’s piloted by a serial hypermiler. 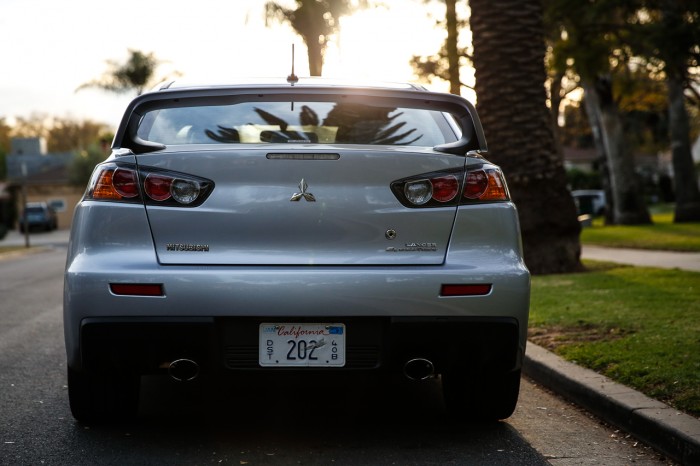 From the exterior, the Evolution sets itself apart from the mass-market Lancer by its wide fenders, revised front and rear fascias, 18-inch alloy wheels, a lowered stance and a monster rear wing. Inside the only way to differentiate it from the Lancer are the Recaro sport bucket seats with serious bolstering, some spruced up gauges, aluminum pedals and a different leather- wrapped steering wheel. 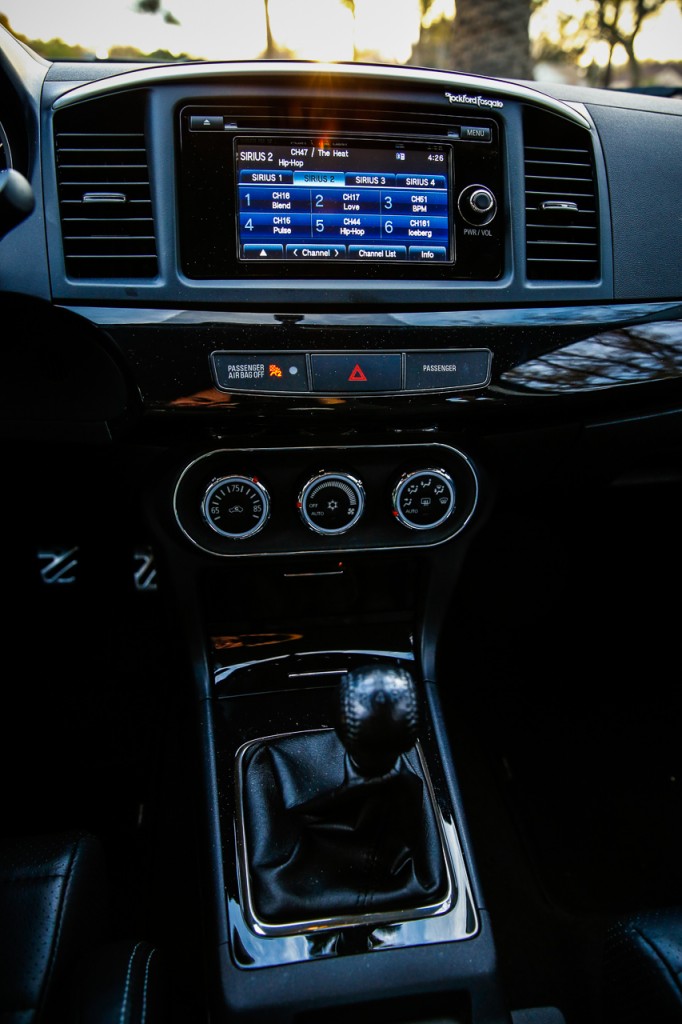 Our Mitsubishi Lancer Evolution GSR has an MSRP of 39,9590, but that does include a couple of option packages. The Sunroof and Leather Package offers Recaro leather seating surfaces, power glass sunroof, heated front seats and some additional sound dampening for $1,800. 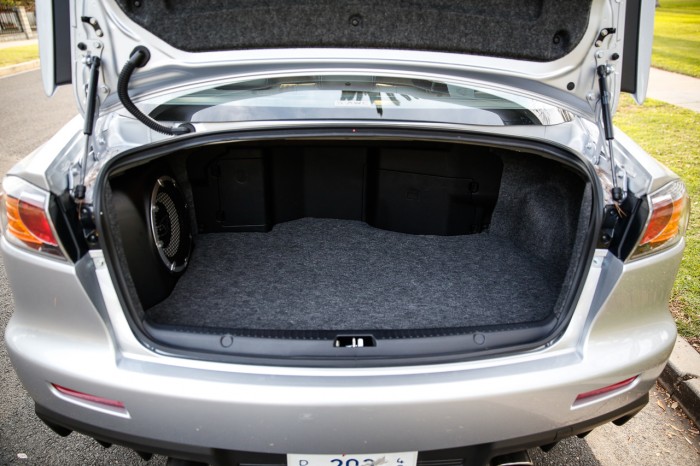 We also had the $2,000 Sight & Sound Package which includes useful HID headlights, a mediocre 710hp Rockford Fosgate sound system and keyless entry. That said, while the 9 speaker system is warranted if you actually want to listen to music in the Evo and overpower the car’s soundtrack, the 10-inch subwoofer takes up a large portion of the already minuscule 7 cubic feet of trunk space. 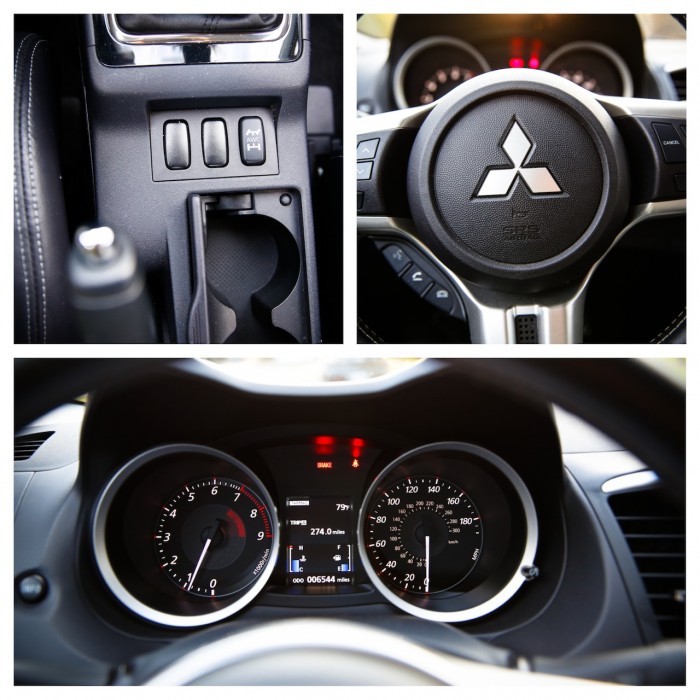 For shelling out 3 1/2 racks, you do get power accessories, automatic climate control, Bluetooth phone and audio connectivity and an iPod/USB interface. Detractors will note that almost $40k is a buttload of money for a car that just doesn’t seem worth it at first glance. That wouldn’t be doing the Evo justice, but it does takes a special someone to bring this car into his/her life. 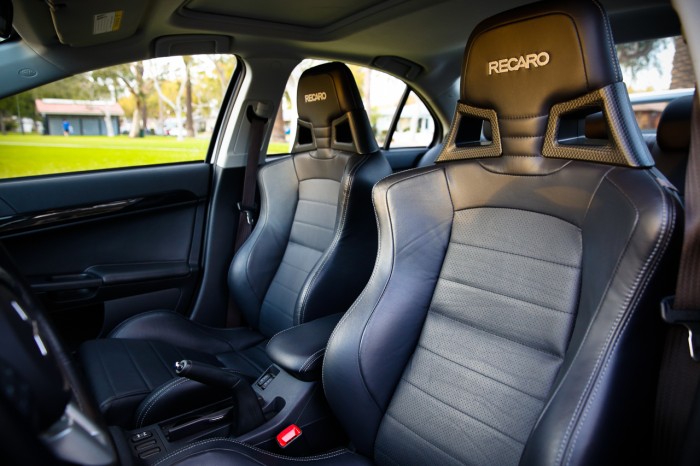 If you want to feel like a rally champion 7 days a week, the Evo will serve up thrills by the moment given the right environment (in other words, the track or the hinterlands of Argentina). But if you are a commuter and spend far too much time on crappy city streets, the stiff suspension and choppy ride can be brutal.

On the flip-side, if you spend significant time on the highway going straight for long periods of time, the experience can be equally painful. Without a 6th gear, the car drones on incessantly and road noise is ever present. And good luck trying to find an ideal driving position. Without any seat height adjustment and a tilt-only steering wheel column, taller and shorter folks alike may not be too pleased with the setup. 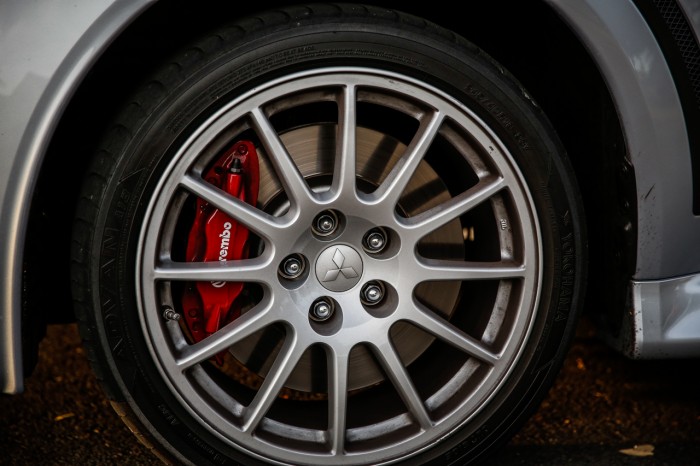 The Evo is a car that you want to root for, but, in this day and age, it’s more of an anomaly with storied name recognition than a vehicle you’d want to live with day in and day out. For most of its life, the Evo was only available in Japan. But its strong performance on the world rally stage created demand in the US. After holding off for seven generations, the Evo VIII finally came to the US in 2003 (after a thriving gray market had sprung up). The car was extremely popular for a short period of time but, when Mitsubishi ended their official participation in World Rally Car stage after the 2005 season, the writing was on the wall. Throw in the car’s aesthetic challenges and lack of any real creature comforts and its fate was sealed. 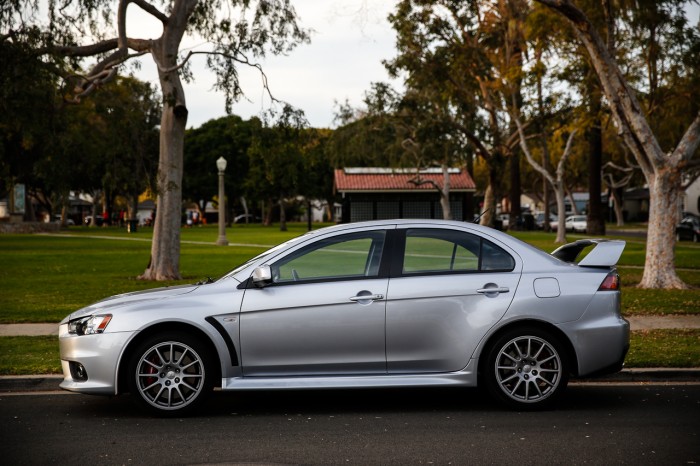 The future of the Mitsubishi Lancer Evolution is muddy. In the US, Mitsubishi Motors has been suffering a slow death over the past few years and its dealership network is in tatters. But despite all signs pointing to its demise, Mitsubishi has held steadfast that it has no intention of leaving the States and has even increased ad spending to prove its determination. The current generation of the Lancer Evolution has been around for 7 years now and is desperately in need of a serious revamp.

What we do know is that it will most likely be a hybrid in some way, shape or form, making use of the company’s i-MiEV electric technology. (We’ve also heard far-fetched rumors that the Evo XI might even be a 500hp monster taking aim at the Nissan GTR). Whatever the future holds, we sincerely hope that the Lancer Evolution is able to emerge stronger and more defiant than ever. And it will have to bring its ‘A’ game, with the likes of the light and nimble Subaru BRZ/Scion FR-S and the luxury BMW 135i holding things down at the lower and upper ends of this pricing threshold.