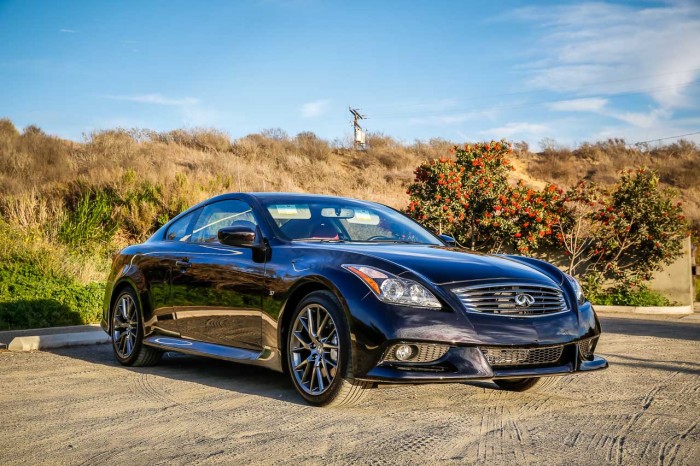 While the Infiniti Q60 is indeed a new model name, it is actually the same ol’ G37 rebranded as part of a strategy to replace the names of all Infiniti G’s, F’s, J’s and E’s with Q’s. The IPL moniker, which stands for Infiniti Performance Line, may be more familiar as Nissan first cast its net into the luxury performance tuning pond back in 2011 in an effort to offer greater individualization and breadth in its luxury marque.

The 2014 Q60 IPL has a particularly striking aesthetic and immediately jolts casual onlookers to attention. Available in just two color options, Graphite Shadow or Malbec Black, the cosmetic tweaks are arguably subtle but, taken holistically, give the car a strongly aggressive vibe. 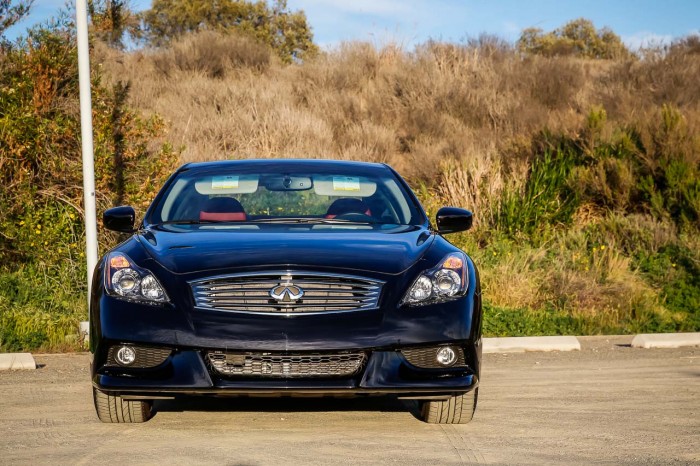 The IPL kit serves up re-contoured front and rear fascias, pronounced side sills, a rear spoiler and large (borderline obese) 120mm chrome exhaust tips. The other thing that sets it apart from the base Q60S are the staggered 19-inch 7-spoke graphite wheels shod with low-pro W-rated Bridgestone Potenza summer tires. 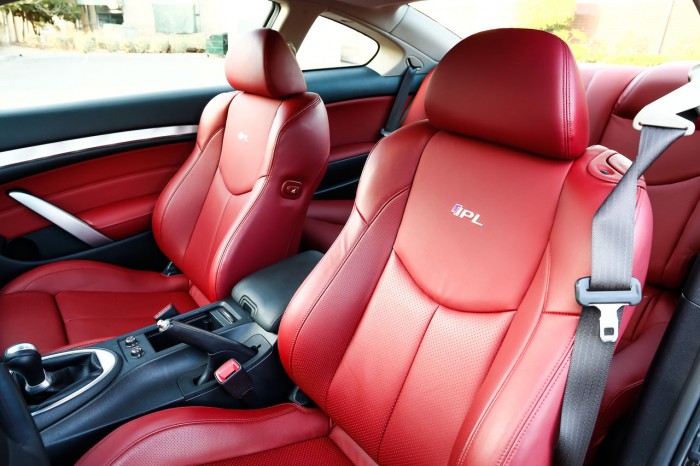 Our IPL G Coupe was appointed with what some might consider audacious ’Monaco Red’ leather sports seats (additional $200), a steering wheel wrapped with graphite leather and red accent stitching, Silk Obi aluminum accent trim, and an aluminum pedal set and footrest. In addition, the IPL comes with the Premium, Sport and Navigation packages all tossed in the mix. The Infiniti Studio on Wheels by Bose delivers hard core sound and substantial bass for a factory system thanks to its 11 speakers. 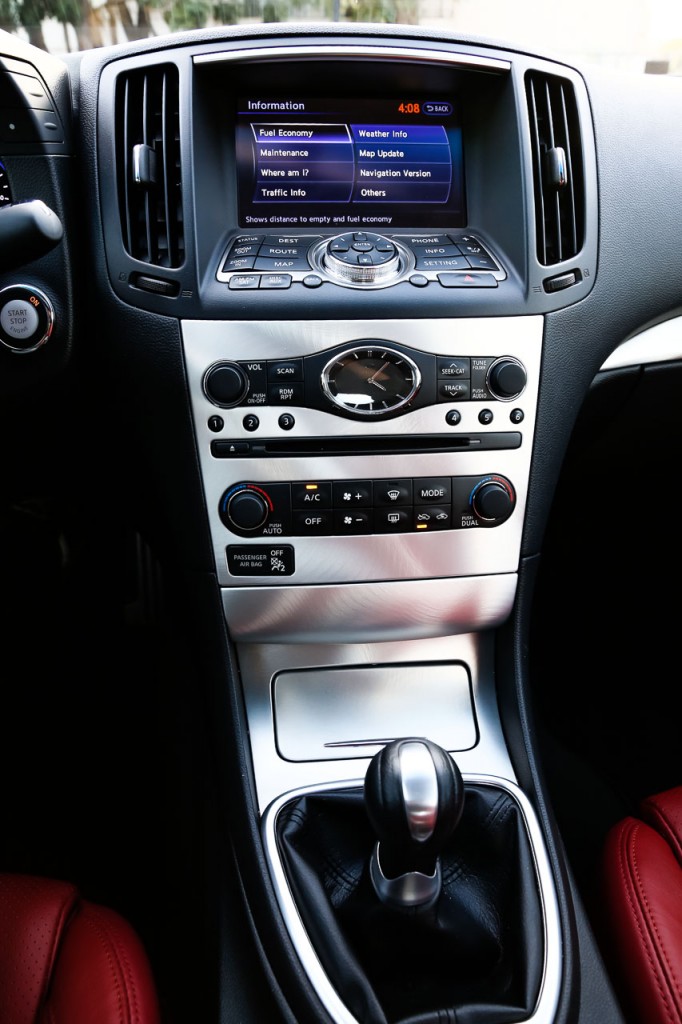 The Infiniti Hard Drive Navigation system functions flawlessly; and the Hard Drive is awesome if you would rather load up your ride with tunes and forgo plugging in an MP3 player or Phone via the USB connector/iPhone jack (which, incidentally, works extremely well despite the dexterity required to reach its less than convenient location). Other niceties include XM Satellite radio, backup camera, rear sonar, Bluetooth, Homelink universal transmitter, power moonroof, dual zone climate control, a tire pressure monitoring system, memory seats for the driver, HID headlights as well as fog lights and LED tail lights. 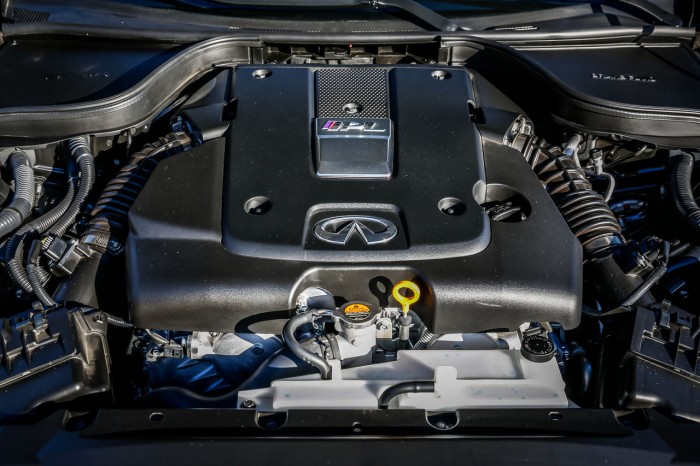 The heart of the IPL G Coupe is the Q60’s 3.7-liter V6 engine with an ECU tune and high-flow crossover exhaust system with fatter tubing reducing back-pressure by 30%. The result is that the base model’s 330-horsepower, 270 pound-feet of torque gets elevated to 348-hp and 276 lb-ft of twist at 5,200 rpm. This is not a huge delta but significant nevertheless. The brakes are the same as those found on the Q60S with four-piston grabbers up front and two-piston calipers in rear. The suspension is tweaked with springs 20% stiffer in front and 10% stiffer in back with damping rates calibrated to the tighter spring configuration. 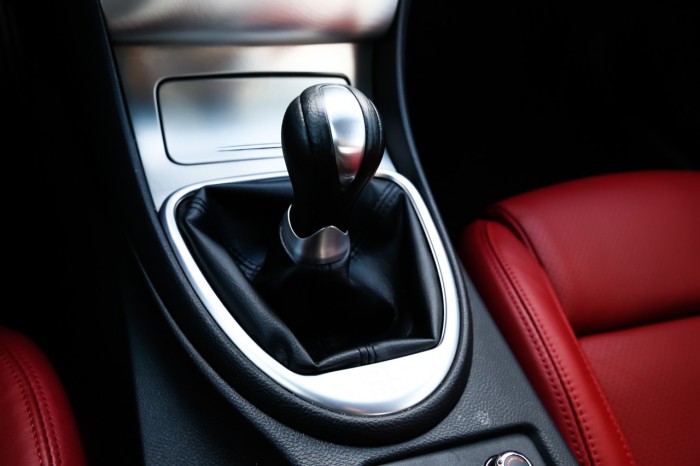 If you are a fan of the G Coupe, the IPL is absolutely the pinnacle and the best ever iteration. Acceleration is just a scant quicker than the Infiniti Q60 Sport and is actually much smoother and linear, feeling less high strung and more robust. The throatier exhaust note adds a bit of aural confirmation but is never intrusive (although others have found it so). The six-speed manual remains the only sore spot, with improvements made in the previous version’s notchiness but still way too much pedal travel required before uptake, which, in turn, is also a tad too nervous. The stick offers nice, smooth, short throws but still doesn’t like to be rushed. 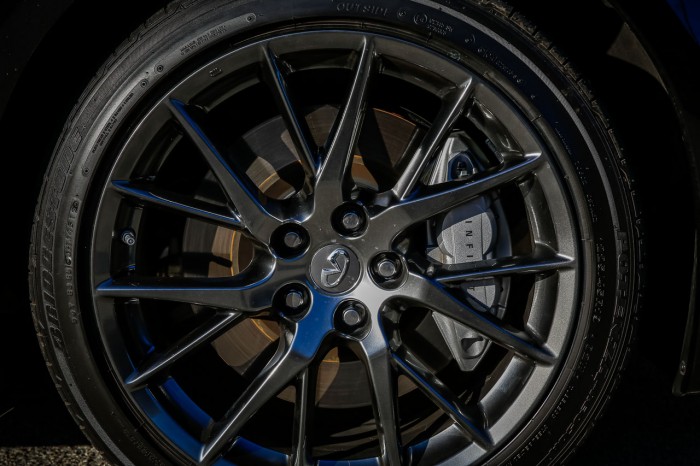 The IPL G Coupe’s ride is tight and a tad harsh but the car is pancake flat during hard cornering. It eats up bumps and uneven pavement without any flagrant jarring and remains composed at all times. The steering feedback is solid with greater communication provided the further you get from center, which still could be more expressive at 12 o’clock. This IPL is not exactly track-ready but the handling is sharp: it navigates corners well and exits completely composed. The brakes are impressive for street driving but not ready for any heavy track workouts. We’d like to see some drilled or slotted rotors but understand that most consumers don’t want to be blowing like crazy through brake pads. 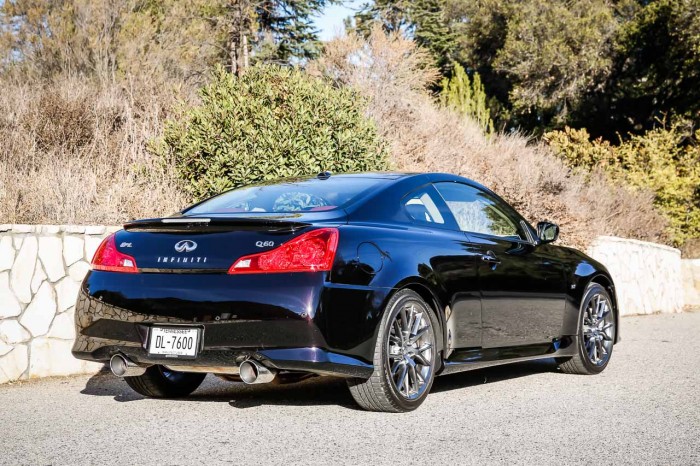 At an MSRP of $51,200 for the 6-speed manual transmission model and another $950 in destination charges, the 2014 Infiniti IPL G Coupe is not cheap but still an impressive offering on an already stellar platform. The IPL offers a fairly significant all-around performance improvement over the Infiniti Q60 S, definitely ups the ante in the looks department and comes with enough goodies to have you flipping through the owner’s manual for quite some time. You only get two color choices and the option of 6-speed or 7-speed automatic, but that’s probably a good thing and cuts down on any cognitive dissonance.

That said, the Infiniti Q60 IPL faces some stiff competition from the likes of German models such as the BMW 435i, Audi S5, Porsche Cayman and Mercedes C350 Coupe. Infiniti is actually very well positioned to take on these challengers with VW and Audi veteran Johan de Nysschen recently taking over the helm at Infiniti. Although his first magic trick was switching around some badge names, we’re sure there are more significant changes afoot. The G37/Q60 platform has had a successful run, but could definitely use an effusion of new life to keep up with the other industry stalwarts and we have no doubt that it’s up to the task.