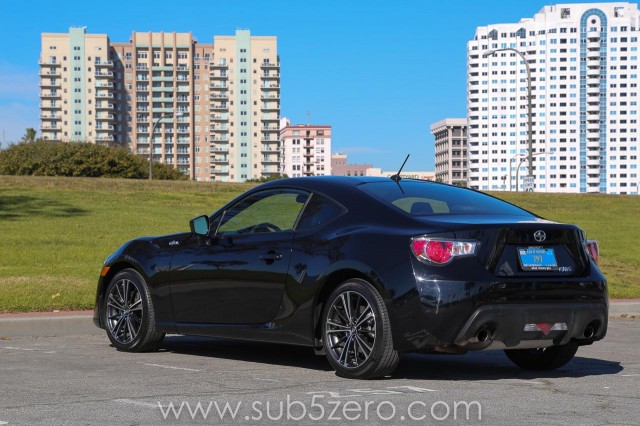 The basic formula for automotive merriment is pretty straightforward. You need rear-wheel drive, decent horsepower, a taut suspension, crisp handling, solid braking capabilities and a transmission up for the task. Unfortunately, this has been a particularly elusive phenomenon in the sub-$30,000 car market, with the exception of the Mazda MX-5, Chevy Camaro and Ford Mustang. However, now, after an excruciatingly long time in the making, the reincarnated Hachi-Roku, aka 2013 Scion FR-S, is finally here. And it was well worth the wait.

The story of how this car came to be is a whimsical tale in the book of automotive lore, or so we would like to think. In the mid-2000’s, Fuji Heavy Industries (FHI), parent company of Subaru, parted ways with GM after they sold their stake in the company to Toyota. By way of some backdoor prodding by the Japanese government, Toyota Motor Corporation and FHI began to look at ways they could work together outside of investor meetings. Around this same time, Akio Toyoda, of the original Toyoda clan and current president, declared that the company needed to build a sports car to revive the passion in its lineup of snoozemobiles. Once the gauntlet was thrown down, Japanese hop-to-it efficiency created a task force post-haste. 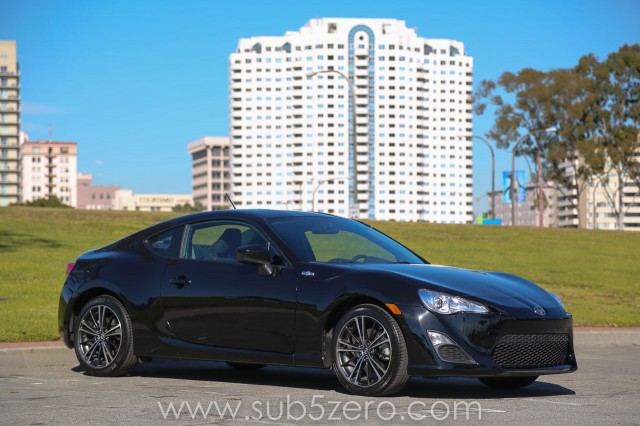 An amalgamation of DNA pulled from multiple Toyota vehicles of storied history was proposed. The styling would take after the Toyota 2000GT from the late 60’s, a car that represented an abrupt departure from the no-nonsense practical nature of vehicles from Japan and showed the world that European manufacturers weren’t the only ones who could create a dyed-in-the-wool sports car. The flat two-cylinder engine would be derived from the Toyota 800, the company’s first mass production sports car. And the soul of the car would be pulled from the Toyota Corolla GT-S, a legend from the mid-80’s known more affectionately by enthusiasts as the AE86. ‘A’ stands for the 4A series engine, ‘E’ for the Corolla model name, ‘8’ represents the 5th generation of the series and ‘6’ is the iteration within the generation. Got it? Good.

So, back to the Subaru tie-in… Toyota still didn’t necessarily have the internal passion to drive the project through to fruition and, in need of a potential collaboration with Subaru to make everyone happy, they reached out to their new partners to work their magic. Unfortunately, Subaru balked at the initial proposal for reasons which were never actually formally disclosed, but most likely relate to the fact that their entire brand identity centers around four decades of all-wheel drive vehicles, and this was definitely not that. 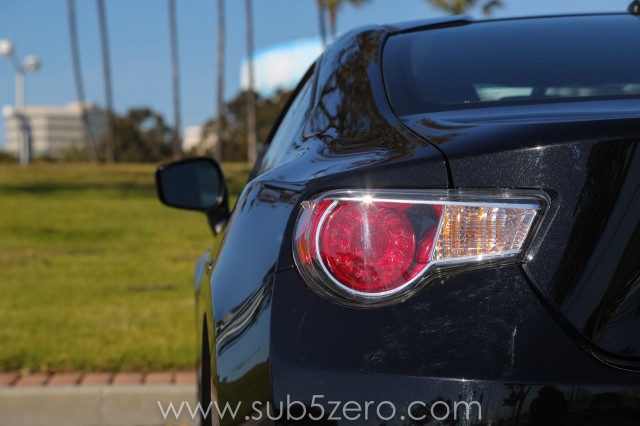 In any case, even though they turned their backs on the project at first blush, behind the scenes they worked on a prototype with a low center of gravity using another piece of equipment for which they are well-known, boxer engines. After Toyota saw the fruits of their labor, it was back “On Like Donkey Kong” (Nintendo Trademark duly noted).

Late 2007 saw things kick into high-gear with Toyota handling the styling and Subaru in charge of development and manufacturing. There is no question that Toyota got the better end of the deal, but the big dog always get the bigger end of the stick.

So, what’s the haps? The Scion FR-S, Subaru BRZ and Toyota FT-86 are all basically the same car, with slight tweaks in styling, interior accoutrements and suspension setup. For the purposes of our review, we had an opportunity to spend a week with the FR-S which, by the way, stands for Front-engine, Rear-drive, Sports car. Okay, so the name is wack, but the car is far from it. In fact, we were blown away by the end result. 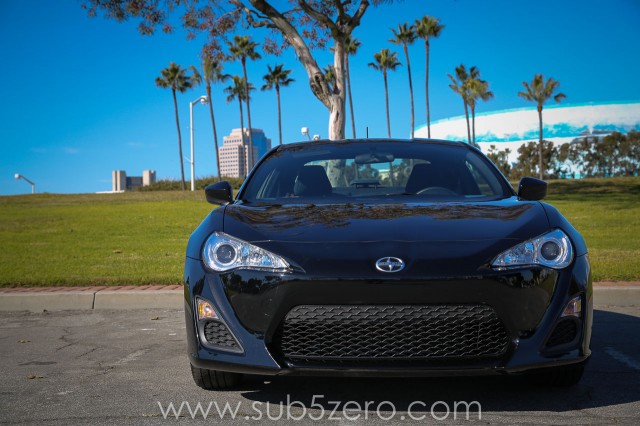 The look of the FR-S is young and spry with a hint of repressed aggression. The trapezoidal grill sets itself apart from the hexagonal shape of the BRZ which we actually prefer. The lines of the car are smooth and sleek. The front intakes with integrated fog lights placed on either side of the large open grill give the car a mildly menacing look. The rear is equally sporty, with an impressive racing-inspired diffuser with integrated triangle-shaped brake light, dual exhaust and 12-element LED tail lamp setup. The only real issue we have with the look is a petty one: the large amount of wheel gap and the 17-inch alloy wheels which don’t seem to do the car justice. 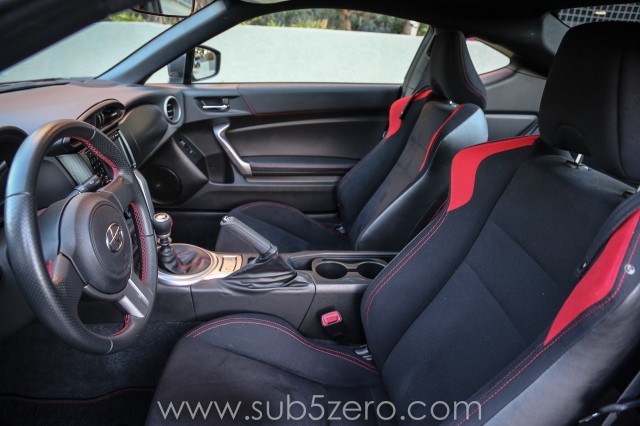 If there was any doubt to as to the nature of this car from its outward appearance, the purpose is crystal clear the second you slip into the cabin. The cabin looks more like the interior of a race car than a run-of-the-mill sports car, and you get the message that you’re in it to drive. 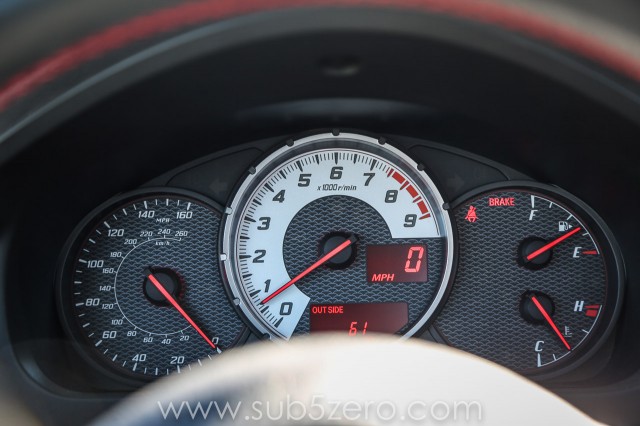 The spartan black instrument panel is offset by cool orange accents featuring a large tachometer with digital speedometer in the center. The climate control system is adjusted by large knobs. Most of the dash and interior is rubber and matte-black plastic with some carbon-textured accents. The 14 inch leather-wrapped and telescoping steering wheel is tiny compared to other Toyota vehicles and feels just right. The fabric seats are heavily bolstered and extremely comfortable with attractive double stitching. 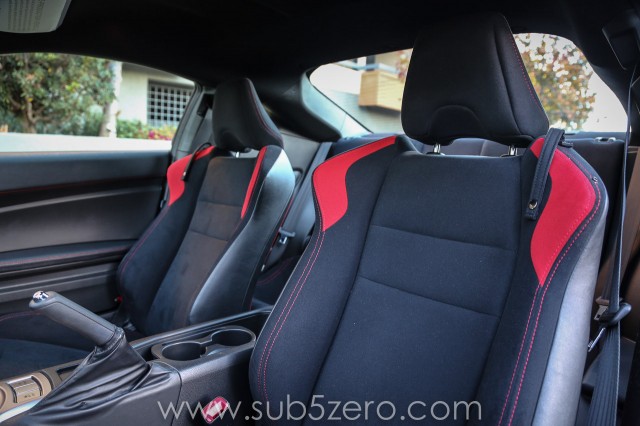 The cabin is tidy and snug and feels almost like an extension of your own body after a few minutes behind the wheel. One annoyance is the handbrake which seems to cause forearm and wrist callouses due to its close proximity to the shifter. 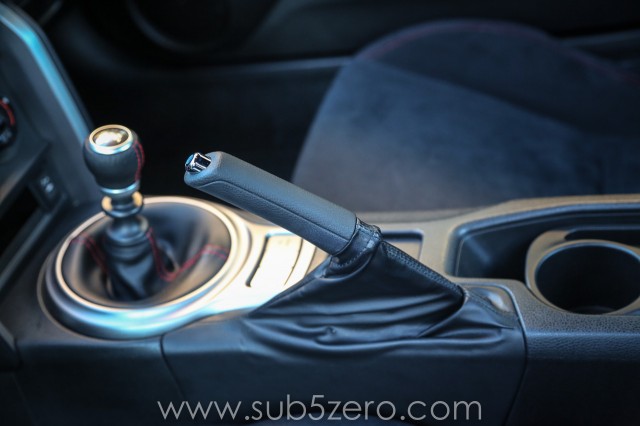 That said, there is enough room between the foldable rear seats (more aptly referred to as cubby spaces, because they are not made for human occupancy) and the trunk to actually fit four wheels/tires, a toolbox and a helmet for those looking to tear up their local autocross on the weekends. 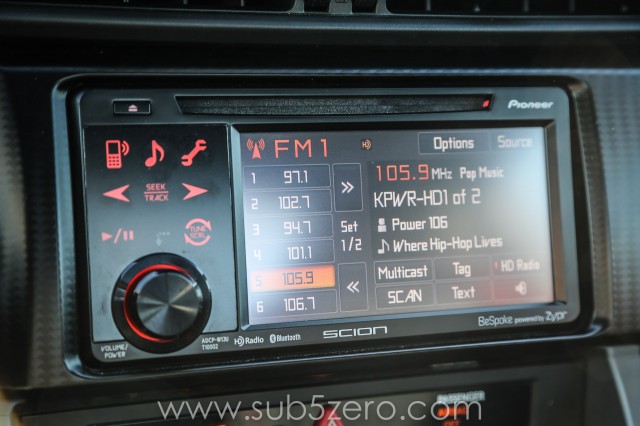 The highlight of the interior seems to be the 340-watt Pioneer Bespoke sound system which is boomy and high-powered by way of 8 speakers. We thoroughly enjoyed the available apps including the Pandora service via the standard iPhone connection but found the Bluetooth connection to be rather annoying (as it first disabled the audio system before connecting to a call, and then turned the system back on for a couple seconds before actually allowing the call to come through). Overall, the system is solid but the ‘buttons’ on the 5.8-inch touch-screen head unit are tiny and require serious concentration and the steady hand of surgeon to actually control while driving. Unfortunately there are no steering wheel controls to rectify this issue. 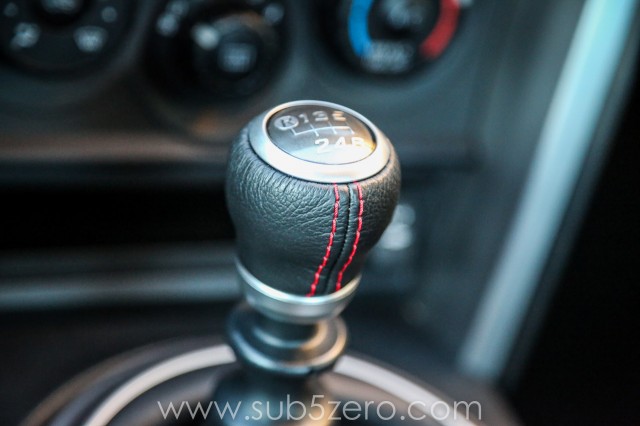 The FR-S is quick (as a measure of time) and nimble, but not fast (as a measure of speed).Don’t expect to beat anyone off the line, including the soccer mom in the Camry SE next to you. The direct injected 2.0-liter boxer engine is good for 200 hp and 151 lb-ft of torque, sending power to the rear wheels by way of a six-speed manual gearbox. This seems like a seriously anemic setup for a sports car, but the FR-S with manual tips the scales at just 2,758 pounds, and has a weight distribution of 53/47 percent front to rear. This allows the FR-S to provide way more driving enjoyment than a quick glance at the spec sheet might indicate. 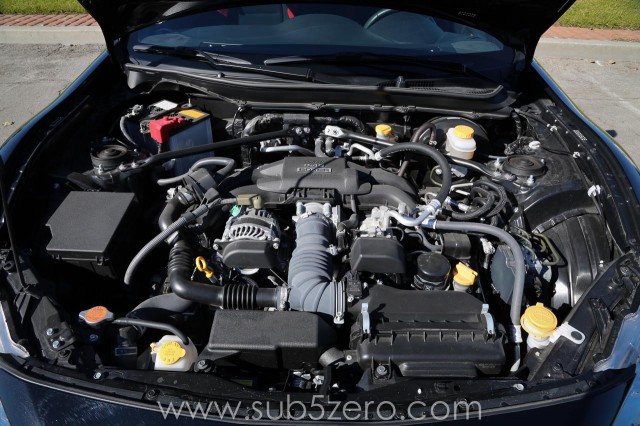 That said, the car could definitely benefit from 60 or 70 more horsepower, which we hope comes by way of a factory turbo option at some point. A special “Sound Creator” uses the engine’s air intake to send audio into the cabin, which is actually kind of unpleasant. It’s an interesting but unnecessary approach and we would much rather hear a nice throaty sound from the exhaust system which is pretty weak.

In keeping with the “86” theme, an interesting side note is that the naturally-aspirated engine features a bore and stroke of 86mm respectively and the inside diameter of the tailpipe ticks in at the same 86mm. Also of note is that this isn’t Toyota’s first trip to the boxer show. The Sport 800 from the late 60’s also had a boxer-style engine. 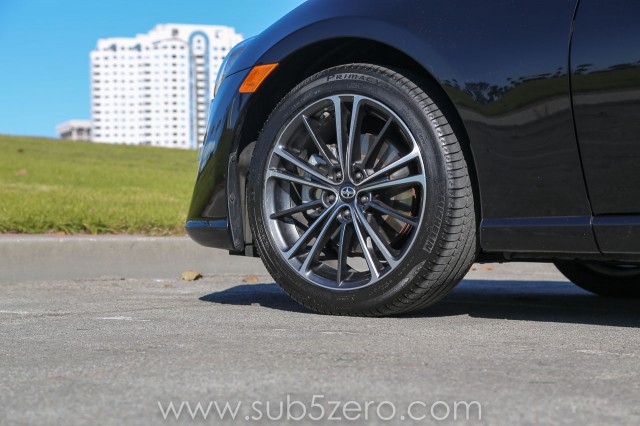 The car feels a little slow to wind up, but once you get it going it really is a blast to drive. Because what the FR-S lacks in giddyup, it more than makes up for in handling. The chassis is wonderful and the suspension rubber band tight which helps the car to remain perfectly flat during hard cornering. MacPherson struts in front and a double-wishbone setup with inboard mounted shocks in the rear keep the car firmly planted while a shock tower brace and chunky sway bars provide additional rigidity. 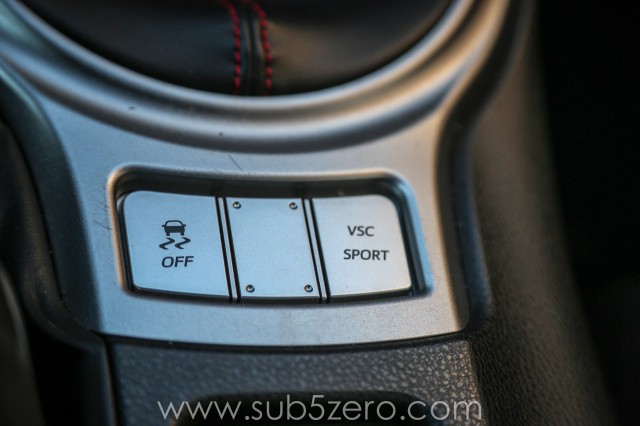 Drifting comes with ease right out of the box and a Torsen limited-slip differential keeps the rear wheels spinning. Holding down the Traction Control button for 3 seconds is all that is required to disable all oversight and get the car in the mood to go sideways. There is also a DSC button right next to the Traction Control button which reduces but does not eliminate computer intervention, allowing you to scare yourself but not the car, which quickly saves you from yourself.

In fact, before I had the opportunity to hit the canyons to see what the car could really do, I found myself accelerating hard, standing on the brakes and flinging the car around turns because it was just so capable and downright fun to drive. The steering is so responsive that those used to the muted and dull responsiveness of the typical passenger vehicle will be shocked at how a small twist to the left or right can have you in the next lane. 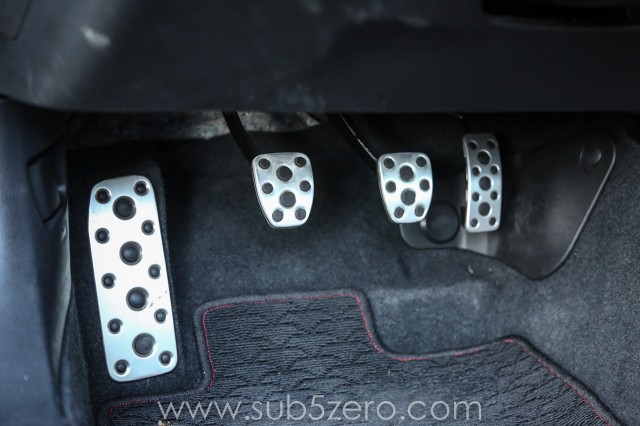 The brakes have little to no fade and pedal feel is spot-on with easy modulation. Heel-toe downshifts are a bit challenging due to the alignment of the pedals but after you train yourself to compensate for the height and distance differences, the process becomes natural. The Aisin gearbox slots well with relatively short throws but could definitely benefit from a true aftermarket short-shift kit. Clutch take-up is pretty middle of the road and makes shifting natural and consistent. 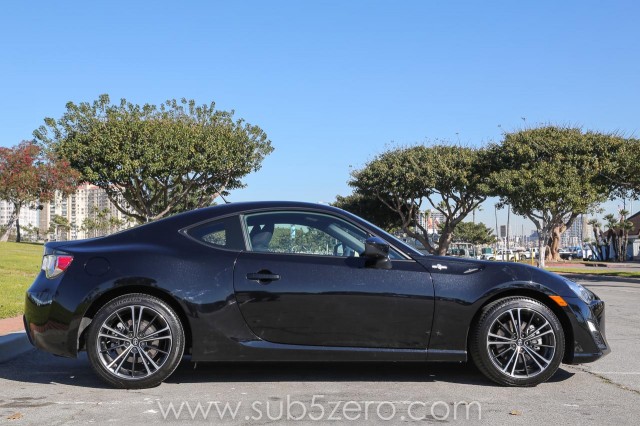 The 2013 Scion FR-S is an amazing offering in the marketplace as a true driver’s car available with a bargain basement base price of just $24,200. For that figure, besides a solid sports car, you also get other niceties such as a tire pressure monitoring system, halogen headlamps and remote keyless entry. There aren’t any serious compromises per se. Sure, we’d like to see a Start/Stop ignition, the boxer engine lacks low-end torque and has to be kept in high-rpms over 4,000 to get any real power and is a tad harsh, but the driving dynamics and fun factor come in spades. The low acquisition cost and huge potential for this car make it an aftermarket tuner’s dream. And it has definitely lived up to the call to action of Akio Toyoda and Scion president Jack Hollis’ claim of the “most anticipated car of the year”.