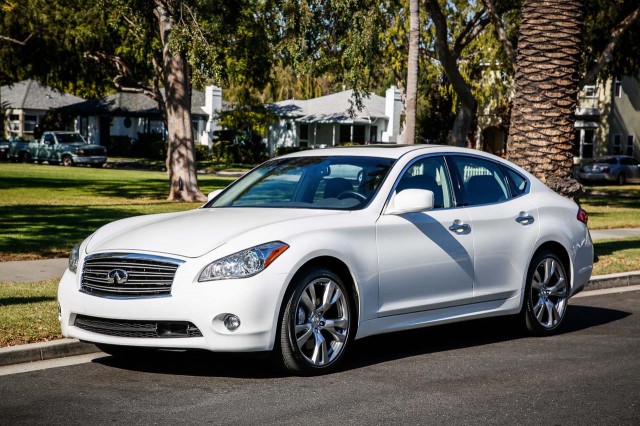 The Infiniti M has had an interesting journey to say the least. Since it sprang to life back in 1990 as an upmarket GT coupe based on the Nissan Leopard, it has seen numerous iterations and has come a long way from step-sister of the range topping Q45 (whose weak sales ultimately elevated the M to a leading role as Infiniti’s flagship vehicle). Now in its 4th generation, the Infiniti M has come into its own and finally seems comfortable being top dog in the lineup.

Things stay pretty much status quo for 2013 save for the introduction of a few standard niceties including auto-dimming side-view mirrors and an auto-trunk cincher. Infiniti also serves up a new Performance Tire & Wheel Package with 20-inch wheels and tires and Sport Brakes. 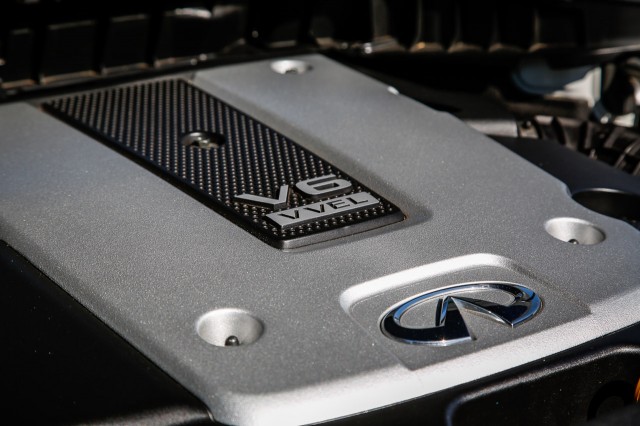 On paper, the 330hp and 270 lb-ft of torque delivered by the 3.7-liter, 24-valve DOHC aluminum alloy V6 may not seem so potent for a car of this heft. But in practice, it propels the M37 from 0-60mph in just under 6 seconds which is impressive. Fuel economy is decent but nothing to write home about with 18mpg in the city and 26mpg on the highway (only a slight improvement over the M56’s 16mpg and 25mpg). But with a whopping 20 gallon fuel tank, the M37 has a range somewhere between 400 and 500 miles. 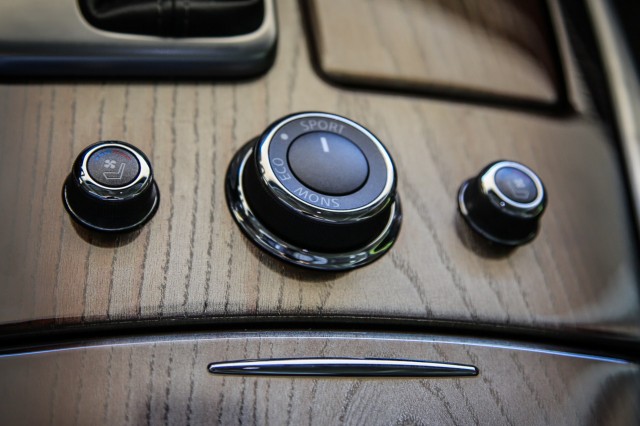 Several different modes are available to help the driver interact with the powertrain. Turning the dial on the console to ECO immediately mutes throttle response and turns the car into a frighteningly slow behemoth. SPORT mode kicks things into high gear by keeping the engine revs high for immediate power. SNOW naturally limits torque to the wheels to allow for better traction in slippery conditions. And of course there is a NORMAL mode which keeps things on even keel.

The automatic transmission is smooth and rows through the 7 gears effortlessly. Infiniti does provide a manual mode to allow drivers more control. The ride is pretty soft as far as luxury cars go; Infiniti had to put a stake in the ground as active suspension wasn’t in the cards. The M37 is composed during hard cornering thanks to sway bars, but don’t get too carried away. The electrohydraulic powered steering is relatively responsive for a beefy cruiser and has a good on-center feel. Braking is linear and stopping power is more than adequate. 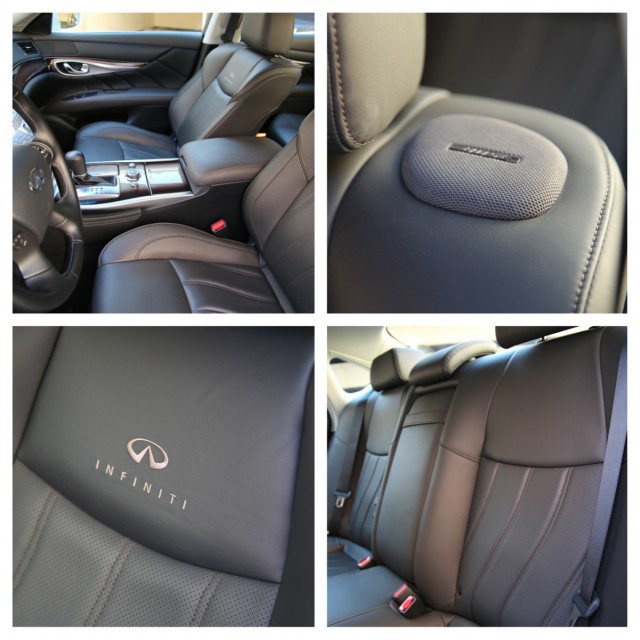 The days of automotive safety features limited to lapbelts are long gone, but we are now entering a radical new era of driver assistance relative to safety. And just in time

… Driving around town in LA, for example, it’s not uncommon to see drivers juggling a Caramel Macchiato in one hand and a cell phone in the other, texting away using a combination of knees and wrists to operate their vehicles. The Infiniti M37 offers a Technology Package which includes blind-spot warning and intervention, lane departure warning and prevention, adaptive cruise control with distance control assistance as well as intelligent brake assist with forward collision warning. Any one of these things could easily be a life saver considering the current proliferation of distracted driving. 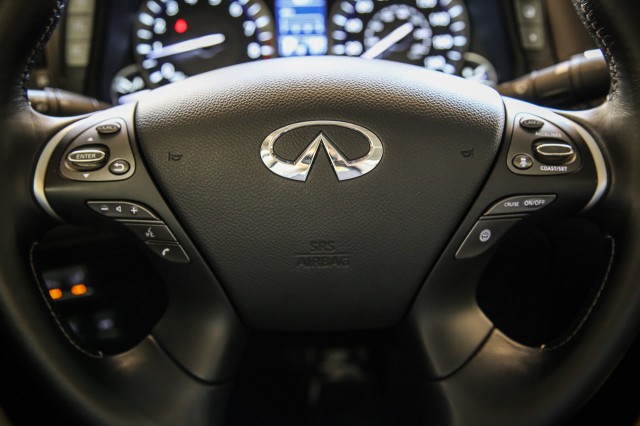 These systems have various options that can be turned on and off but are generally quite helpful and not overly intrusive. The blind spot detection is something that all cars should offer in this day and age. Rather than activating only when a turn is being made, lights in the A-pillar blink each time a car enters a blind spot zone while the turn signal is engaged. The intelligent cruise control system allows you to set a constant speed but will drop down and match the speed of cars in front as congestion materializes, going so far as to stop the car completely in gridlock. In addition, you can set a safe following distance with three different range options available. 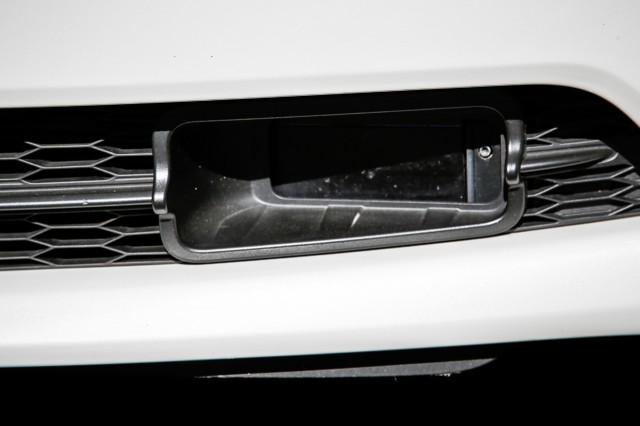 Lane departure can be helpful when you’re fatigued, though the constant beeping sound can be annoying and may encourage you to turn the system off. But if you’re tired, the system’s ability to use electronic stability control to guide the car back into the lane may be very welcome. The same is true of the forward collision avoidance system which is a bit sensitive.

Other nice safety features include a tire pressure monitoring system as well as side impact airbags for front seat passengers and roof mounted side airbags. The motorized seat belt tensioner can be unnerving at first but does relax after if finds a snug fit. 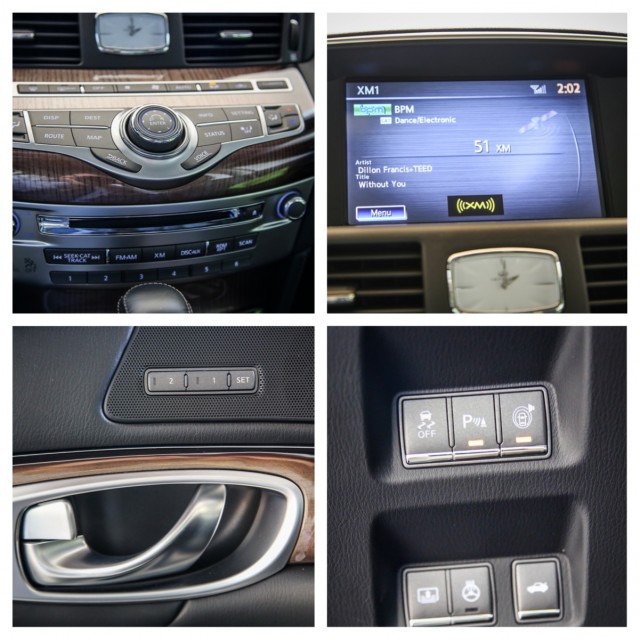 The dolby-digital 5.1 Bose system presents an amazing sound stage with 16 speakers strategically placed throughout the cabin including the shoulders of the front seats. Both the bass and treble reproduction are impressive. The sound sources include all the usual suspects as well as a 9.3 Gig Music Box hard drive and Bluetooth streaming audio.

The navigation system is clearly among the most stellar we’ve reviewed and could be best-in-class with a few minor updates. Maps are stored on a hard drive so response is fast, but the graphic overlays are a bit tired and not nearly as visually stunning as some of the recent offerings from other manufacturers. Infiniti did update the interaction with the system by going with a combo joystick dial that allows you to not only twist and turn but click up, down, left and right as well. And, of course, you can also directly interact with the 8-inch VGA touchscreen. Traffic and weather are provided by XM, and Zagat restaurant reviews are available, but not much else. 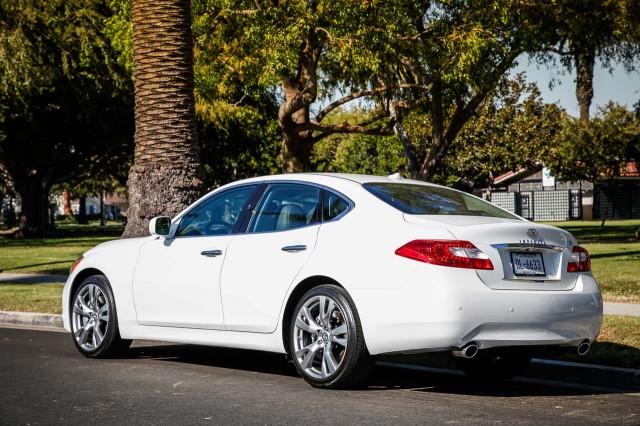 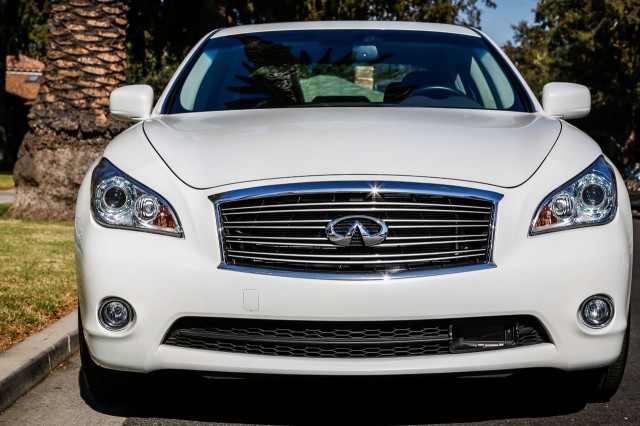 The powertrain is capable and a solid alternative to the V8 found in the more expensive M56. We’re not lovers of the exterior design but it does, thankfully, depart from the amorphous blobs that much of the industry is currently producing and is distinguished if nothing else. The interior cabin is welcoming, intuitive and laden with luxury appointments. The driving technology is top notch but the navigation and Bluetooth system could use some more love.