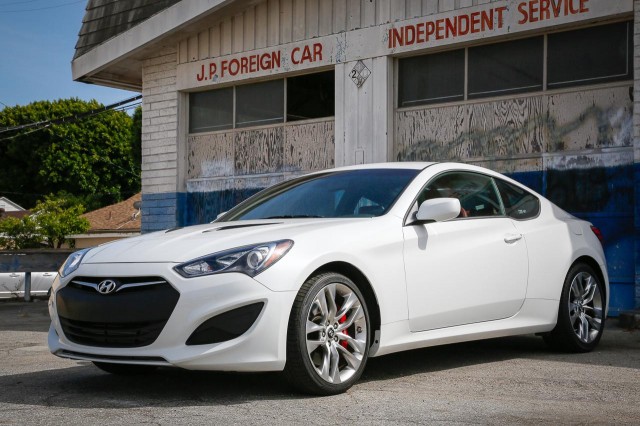 The Hyundai Genesis Coupe has made great strides over the past few years and has finally iterated itself into a sports car which has to be taken seriously. It first debuted in Korea in 2008 and arrived on our shores in 2009 when it made a valiant effort to go toe-to-toe with the likes of the Infinity G37. That was a lofty goal and while it was an impressive debut, the end result came up a bit short.

Now, for 2013, the Genesis Coupe is ready to take another run at the competition with updated looks, significantly more power and a price point that offers tremendous value. We had an opportunity to drive both the 3.8 Track M/T and the 2.0T R-Spec and walked away both dazzled and, on occasion, disappointed by this mid-cycle refresh. 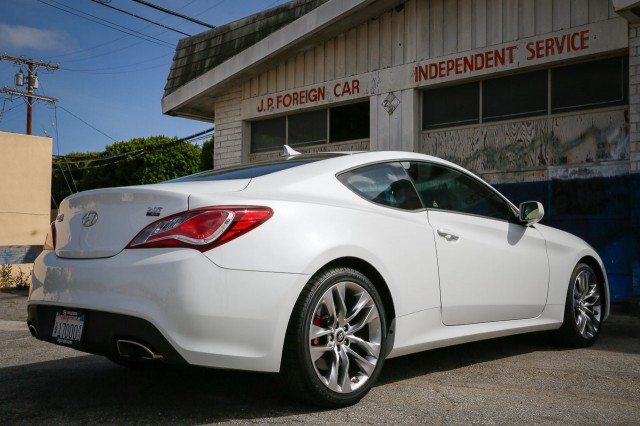 In the looks department, the new Genesis Coupe gets a strong nod. The aesthetic changes give the car more edge with a revised front fascia featuring the blacked-out, open-mouth hexagonal design carried over from the Veloster; a very aggressive hood complete with fake intakes; and an updated rear end featuring LEDs and clear “Altezza” tail lights. The car sits low and wide with a high beltline. 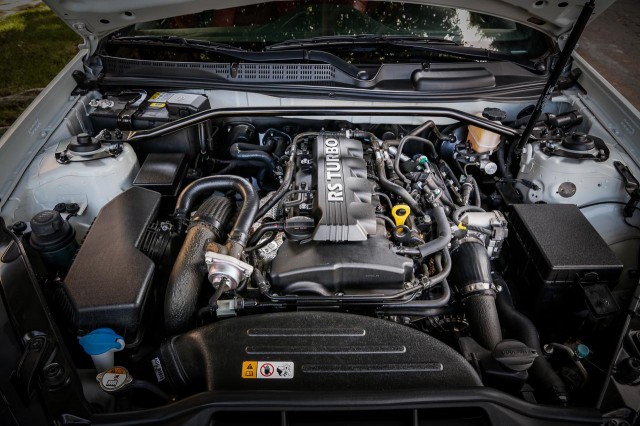 Under the hood, the previous turbocharged four-banger that put out 210hp has been given a shot of adrenaline, bumping output to 274hp and 275 lb-ft of torque. 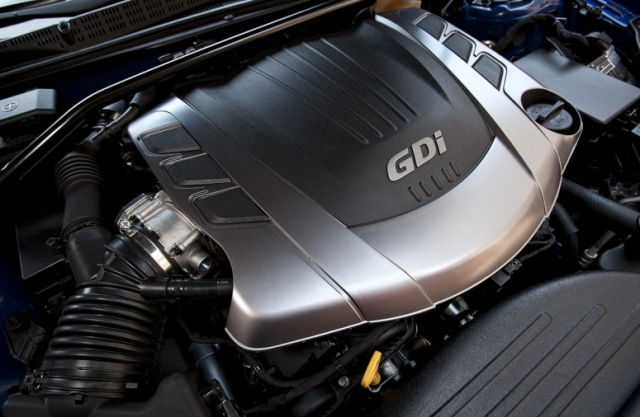 The improvements in horsepower equate to a much more pleasurable driving experience. The 2.0T has a bit of turbo lag but, once in the power band, acceleration is very satisfying and makes the car feel quicker than it is. On the other hand, the 3.8L V6 did not live up to the expectations of having 348hp, which is normally a recipe for exhilarating acceleration. It has a good amount of torque and a great soundtrack but doesn’t kick you in the butt like you would expect thanks to its 3,400lb+ curb weight. For whipping around town the 2.0T proved considerably more enjoyable. 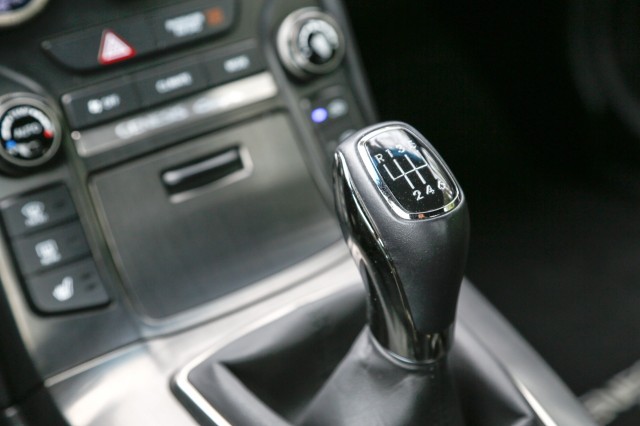 The 6-speed gearbox is still an area in which Hyundai needs to provide significant improvement. The aggressive lines of the shifter give you a visual cue that the transmission is going to be hostile. On both vehicles, the clutch felt like it was working against us every step of the way. Not only does it behave overly notchy but the pedal is heavy with abrupt take-up. There were even some clankity clank noises when the clutch was dis-engaged at low speeds in 1st or reverse.

It took a couple of days to getaccustomedto the setup and to reset muscle memory to avoid lurching around like a moron. Reverse is located just to the left of 1st gear without a true lockout–merely a notch and a chime–which is another annoyance. But once you get everything synced up and develop a zen-like concentration, the clutch issues fade away as the driving dynamics of the car can’t help but keep a smile on your face. 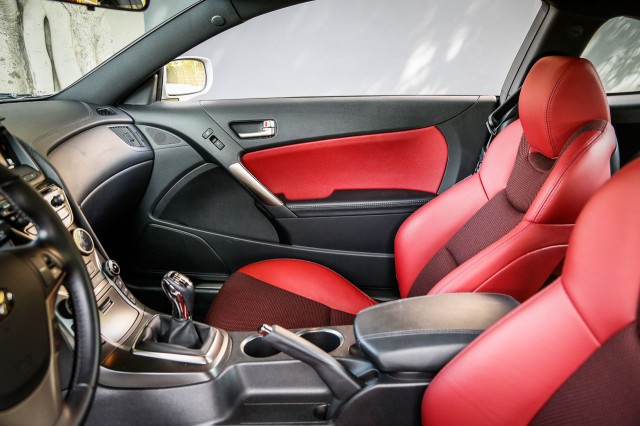 The interior is clean and well laid out and while there is still a large amount of hard plastic in use, it doesn’t feel cheap thanks to the introduction of more soft-touch materials. 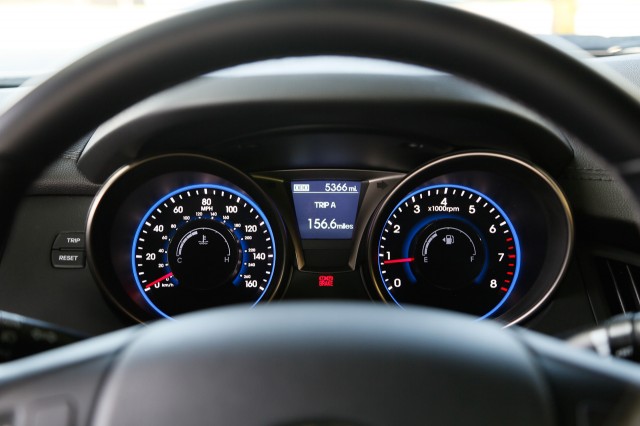 The cockpit is compact and inviting and gives it more of a motorsports-inspired feel. The small leather wrapped steering wheel with its heavy weighting is terrific and makes you feel in complete control. 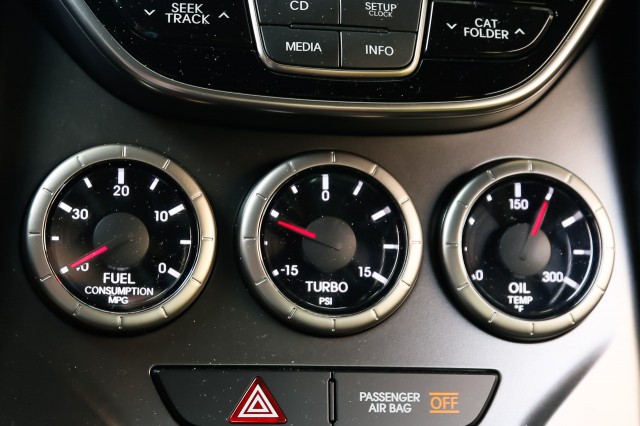 There are a series of 3 gauges in the center console which display fuel consumption, torque (3.8) or boost (2.0T) as well as oil temperature. While this is a nice touch, its placement renders it useless when you’re actually driving. 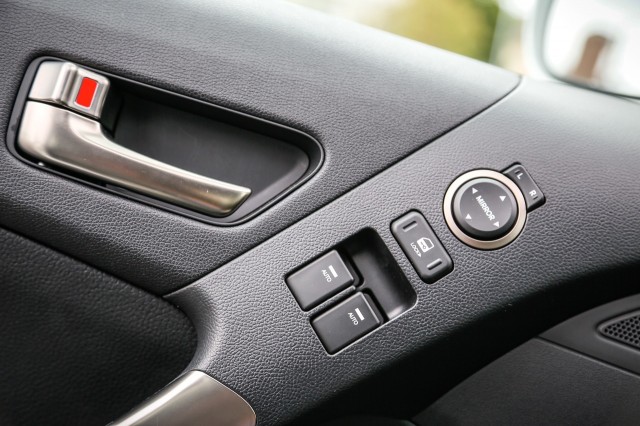 One oddity is the power window and mirror switches, which sit flush against the door panels, causing more clock-wise hand rotation than one would perhaps like. 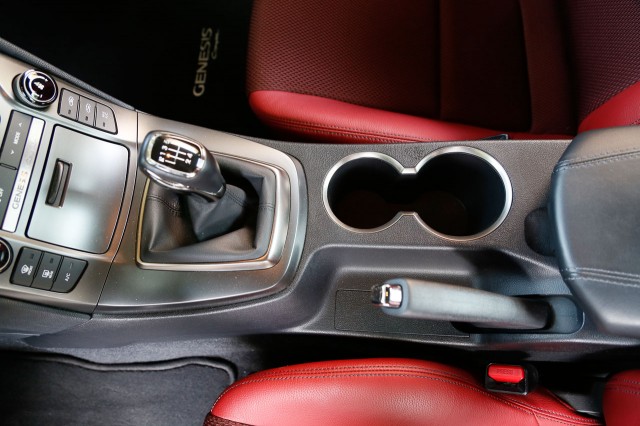 The placement of the cup-holder in the center console also presents some challenges for shifting unless you stick with using short cups. 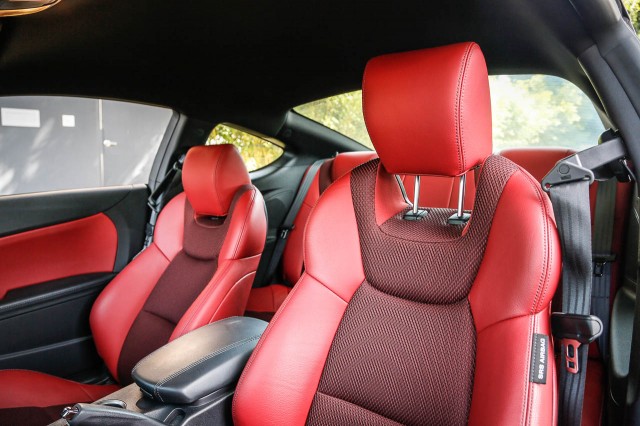 The front seats are positioned extremely well for visibility and proved comfortable even on longer jaunts despite their firmness and heavy bolstering. 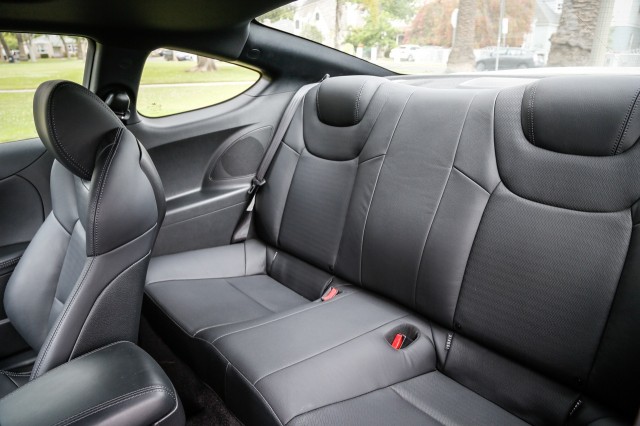 The back seats should only be reserved for groceries, a gym bag or very small individuals whom you hate. That said, the 10-cubic-feet trunk offers more room than one would expect and, with the rear seats folded down, can handle some serious cargo. 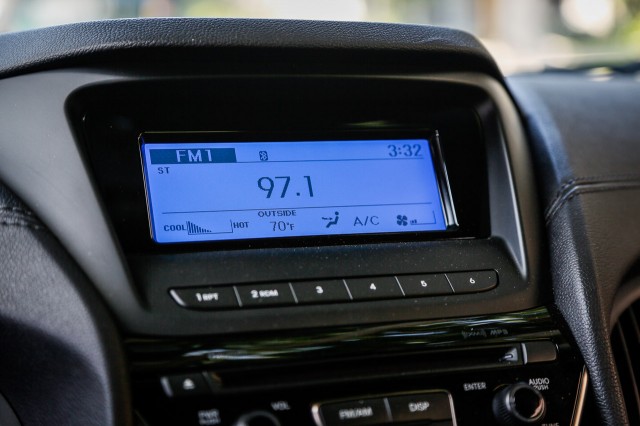 The standard 6 speaker audio system we had in the 2.0T served up AM/FM/SeriousXM radio along with CD/MP3 capabilities and performed well. The Track edition adds automatic temperature controls, nav and premium audio. 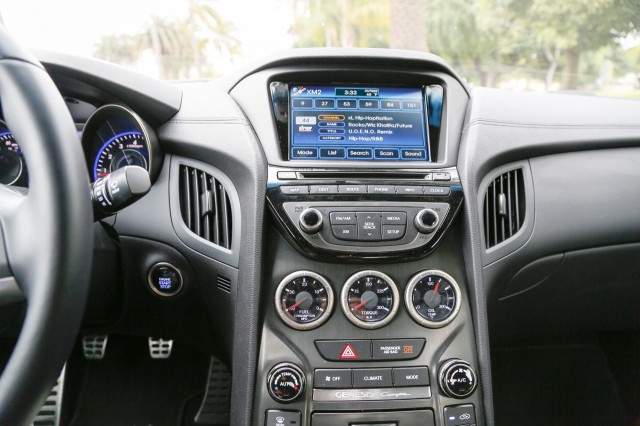 The 360 watt Infinity 10 speaker system in the 3.8 Track offers HD Radio and has much more kick but it’s not overly impressive. Bluetooth calling and audio functions well, but having to be stopped with the brake peddle engaged before setup is annoying. 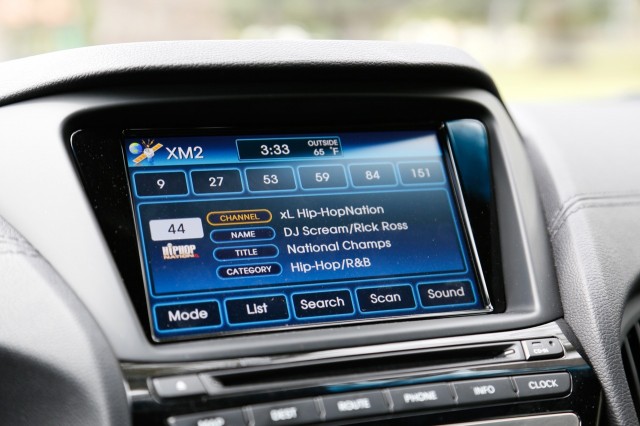 The 7 inch touchscreen in the Track edition serves up impressive graphics, fast responsiveness and solid navigation with traffic alerts. The ‘points of interest’ feature is very helpful and can display gas stations and food spots as you drive. The BlueLink telematic system serves up helpful options such as voice text messaging and turn-by-turn navigation and proved extremely useful. The iPod and USB/Aux port available in both cars makes connectivity of iPhones and MP3 players quick and easy. 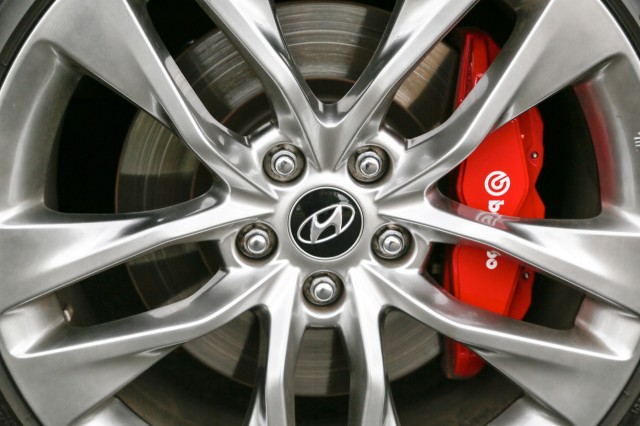 On the performance side, the R-Spec model provides a track-tuned suspension, adjustable camber bolts, 19-inch wheels on summer tires, 4 piston Brembo brakes and a Torsen limited slip diff. The Track edition offers the same but serves up better standard equipment and a spoiler. 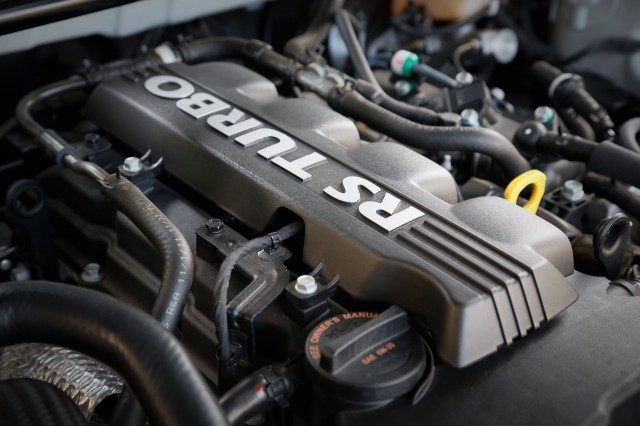 The Genesis Coupe is definitely on the heavy side but body roll is kept in check. It corners flat and predictably with none of the major issues that affected the previous iteration. That said, there is a bit of understeer on turn-in, so getting back on the throttle needs to be done with care. The tracking/stability control system now offers several flavors of intrusion. Fully engaged, it is like a controlling and nagging parent, constantly keeping you in check. Fully disengaged, you will likely feel like you are working towards your Formula Drift license as getting sideways comes with ease. In the middle, you can have some fun with decent amounts of tire spin without putting yourself in harm’s way. Ride quality is not really an issue for either the R-Spec 2.0T or the 3.8 Track edition. Even with the stiffer suspension, traversing crappy city streets was not jarring. And thanks to the Brembo brakes stopping power is substantial with no discernible fade.

The 2013 Hyundai Genesis Coupe fits a strange mold due to its combination of serious performance aspirations, excessive weight and average interior fit and finish. If it plans to truly compete with the likes of the Infiniti G37, it will need to add upscale accoutrements and provide a more luxurious fit and finish. If it wants to be a serious sports car, it will need to shed some serious weight. Trying to take the donor Genesis luxury sedan and carve out a sports car has resulted in a car that is just too chunky and wide. Vehicles like the Scion FR-S/Subaru BRZ are game changers and Hyundai will need to adapt.

As it stands the Genesis Coupe is a bit stuck in the middle trying to do both things well and compete on price. The 2.0T R-Spec runs $27,515 while the 3.8 Track M/T comes in at $34,015. It would be great to see Hyundai take some risks and deliver a truly compelling offering that fully commits to either one side or the other. But, overall, both vehicles are solid and enjoyable offerings in their respective price range, and we wouldn’t hesitate to recommend either one.