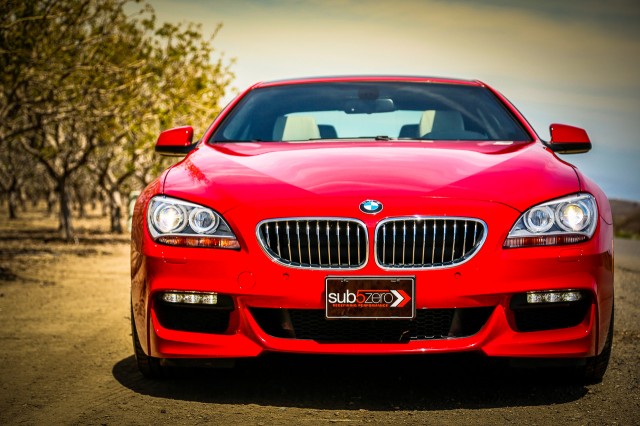 The original 6 Series was introduced in 1979 as BMW’s ‘executive’ coupe and was iterated until 1989 when production ceased after an arguably solid run. There was then a long hiatus until 2003 when the 6 Series re-emerged like a lazy ex-prizefighter with a bloated physique, as if during its dormant state it had been eating Bratwurst and Mettbrötchen while binge drinking Oettinger beer.

Now, in its 3rd generation, the new F12 model looks like GSP at a UFC weigh-in: athletic, chiseled, lean and ready to battle the competition. It’s hard not to be drawn to the 6 Series’ sleek, sculpted flanks, sharp grill and sweeping roofline. The 2013 BMW 640i sits low and wide with excellent proportions, really an aesthetic marvel. 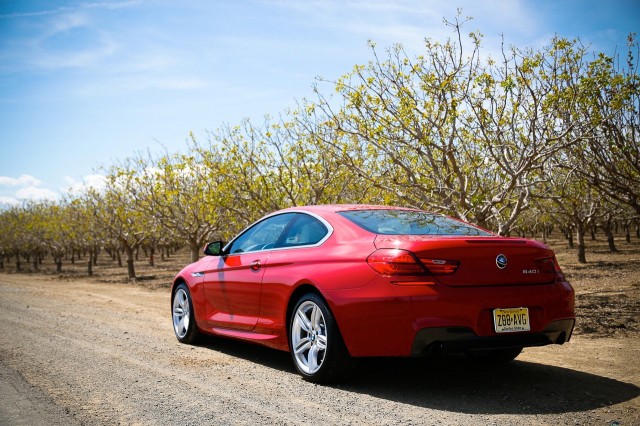 The optional M Sport Package ($5,100), which graced our model, is the icing on the cake and gives the car an even edgier look with an aggressive styling kit and 19″ light alloy V-Spoke Wheels with performance tires. Inside you get a M steering wheel, multi-contour seats and Anthracite Alcantara Headliner. 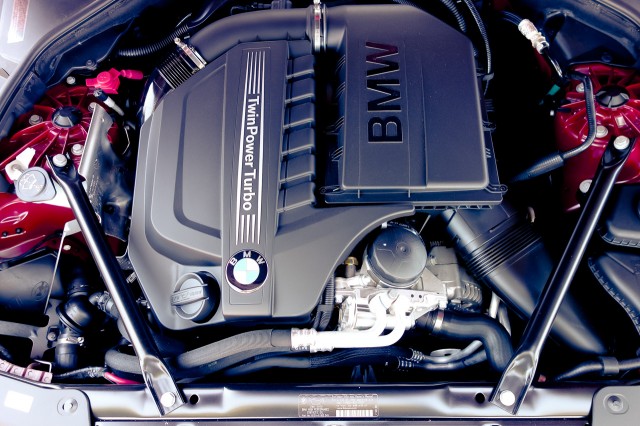 At first blush, when pondering engine choices and trims, it would be easy to dismiss the 640i as an entry-level model with mediocre performance and perhaps too much compromise. But in fact the 3.0-liter N55 inline 6 cyclinder with 315hp and 330 lb-ft of torque presents a real conundrum for potential buyers because it is just so damn good. 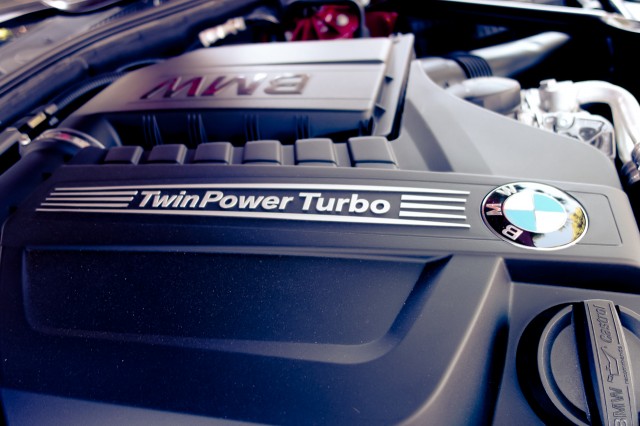 It offers 32 percent better fuel economy in the city and 20 percent on the highway, compared to the 40ohp twin-turbocharged V8 in the 650i, with only a marginal loss of get-up. It’s also 200 pounds lighter to boot. High Precision Direct Injection, dual overhead camshafts (DOHC), Valvetronic, and Double-VANOS steplessly variable valve timing all equate to one of BMW’s most advanced engines to date.

An 8 speed ZF automatic transmission delivers power to the rear wheels and propels the 4,150 pound car from 0-62mph in just 5.4 seconds on its way to a top speed of an electronically limited 155mph. The 640i is only a half-second slower than the 650i and actually faster than the previous generation V8 model. 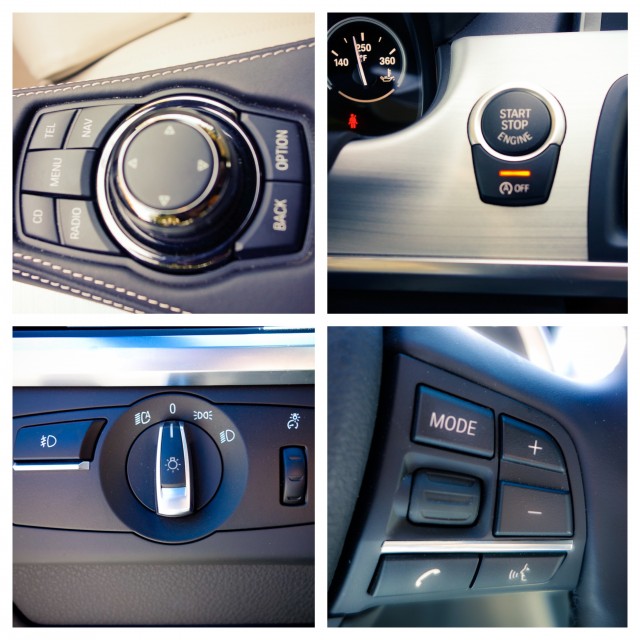 We found the Driving Dynamic Control system intuitive and competent. Five driving modes of varying characteristics — Sport +, Sport, Comfort, Comfort+ and Eco Pro — span a wide gamut from aggressive to easy-going to fuel sipping while adjusting everything from throttle response and steering input to suspension firmness and gear shifts (as well as Active Roll Stabilization ($2,000) and Integral Active Steering ($1,750) if so equipped).

The old ‘Normal’ mode is now Comfort, which serves up soft, linear acceleration while Comfort+ adds a state of overall steering numbness. Sport+ mode was the most engaging as the stability intervention threshold is elevated to allow for aggressive driving. In maneuvering the 640i up and down the winding roads of Mulholland Hwy past the famous Rockstore, I found the car to be agile and willing despite its heft. This is thanks in part to the electromechanical steering and the standard Dynamic Damper Control continuously adjusting the suspension while the Active Roll Stabilization kept the car perfectly flat during hard cornering. Steering wheel-mounted paddle shifters offer an additional level of driver control and delight. 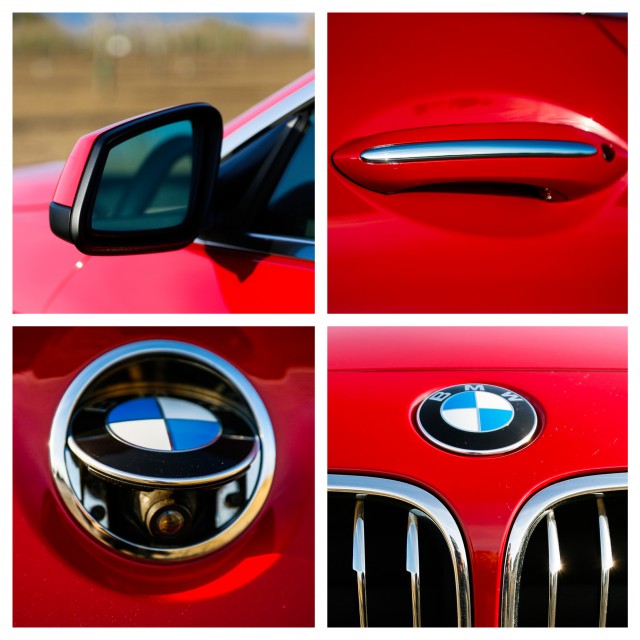 Eco Pro is the kryptonite to Sport+ and increases fuel efficiency by up to 20% as a function of BMW’s EfficientDynamics initiative by optimizing gear changes, throttle response and even the climate control system. This includes the automatic Start-Stop feature, as well, which shuts off the engine when the car is stopped to conserve fuel. It’s hard to get used to the feeling of a stalled car at every stop light but, after a while, it doesn’t even register. (It can also be disabled if the driver finds it annoying.) This Start-Stop function is also available in Comfort and Comfort+ mode. Eco Pro is great on the highway but not much fun around town. 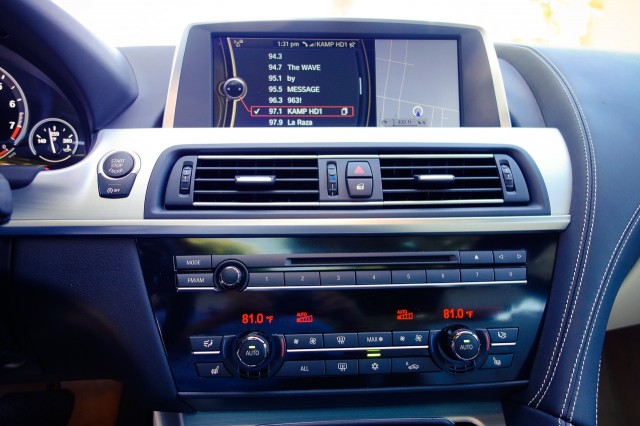 The cabin of the 640i is luxurious, high-tech and quite fitting for a grand tourer . A 10.2 inch high-definition screen serves as command central with inputs from the much improved iDrive system, while a trans-reflective coating allows for easy reading even in direct sunlight. The instruments and controls are all extremely well designed and driver-centric. A rear back-up camera comes standard while parking assist with proximity warnings helps enormously with sliding the big coupe into tight spaces. 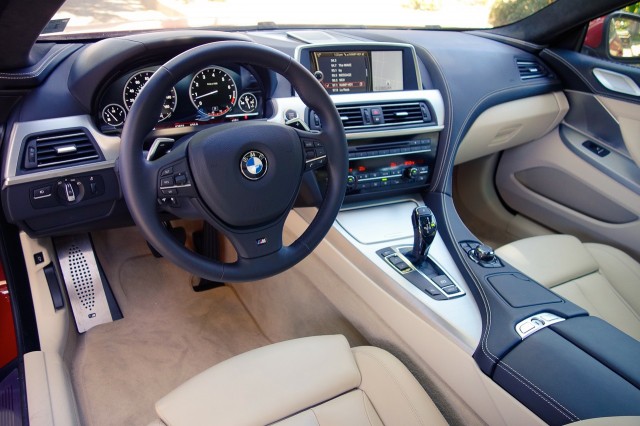 The interior is not only extremely refined but the double-stitched Platinum/Black Full Merino Leather surfaces and premium materials like satin nickel are gorgeous. The 10-way power-adjustable front seats offer as little or as much bolstering as required in addition to 4-way lumbar support. For multiple drivers, there is even a memory system for the driver’s seat, steering wheel and outside mirrors. The rear seats might be a tad uncomfortable for larger individuals but normal folks should have no problem either getting in and out or sitting for extended periods of time. 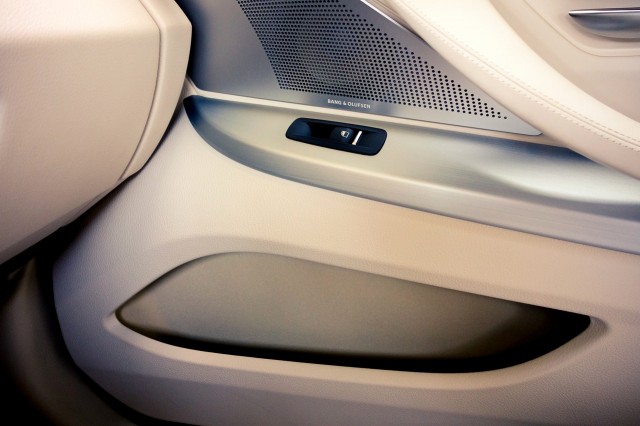 The Bang & Olufsen sound system ($3,750) is absolutely phenomenal with a sound stage comparable to a reference listening room with 16 speakers carefully placed throughout the cabin. Not only does it feature digital signal processing but each of the 2 bass speakers, 7 mid-range speakers and 7 tweeters has its own amplifier. In addition, the drilled metal speaker covers are a nice touch. The BMW ConnectedDrive apps which include Twitter, Facebook and Pandora function pretty well while HD/Satellite radio keep audio fidelity static free. The steering wheel offers controls for the audio system, cruise control, and Bluetooth phone integration. 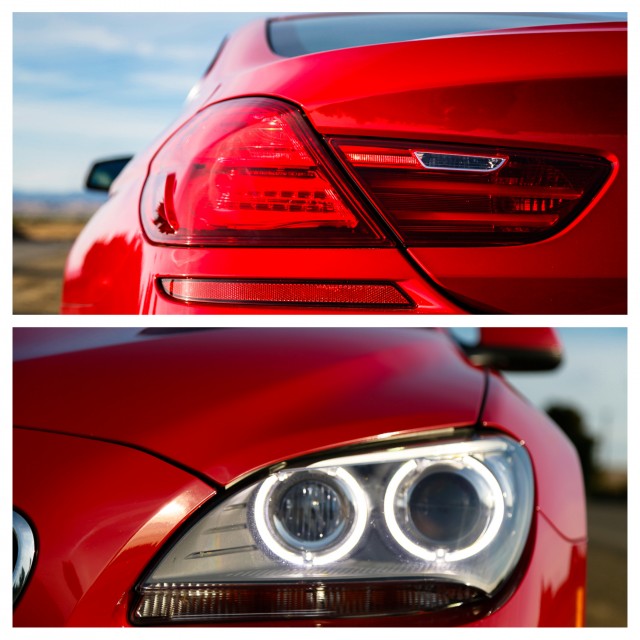 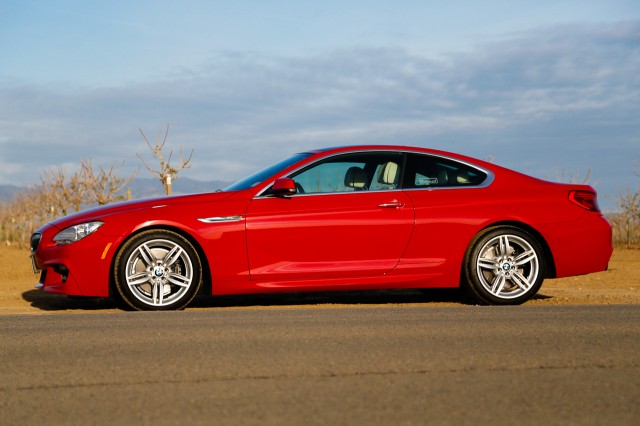 The 2013 BMW 640i is a worthy successor to the original E24 with its stunning looks, exquisite cabin and host of high-tech accoutrements. The twin-scroll turbo on the N55 engine offers almost no lag and, with an EPA rating of 21 mpg city and 31 mpg highway, fuel economy is much better than one would expect for such a large luxury coupe. Sure, it might not be as fast in a straight line as the 650i, but that’s a small price to pay for such impressive fuel economy.The base price of the 640i is $74,475 versus $83,875 for the 650i; considering the fact that it’s not hard to add $20,000 in options when personalizing a BMW, this initial savings may well be worth it. And in our minds, the BMW 640i is a no-brainer.