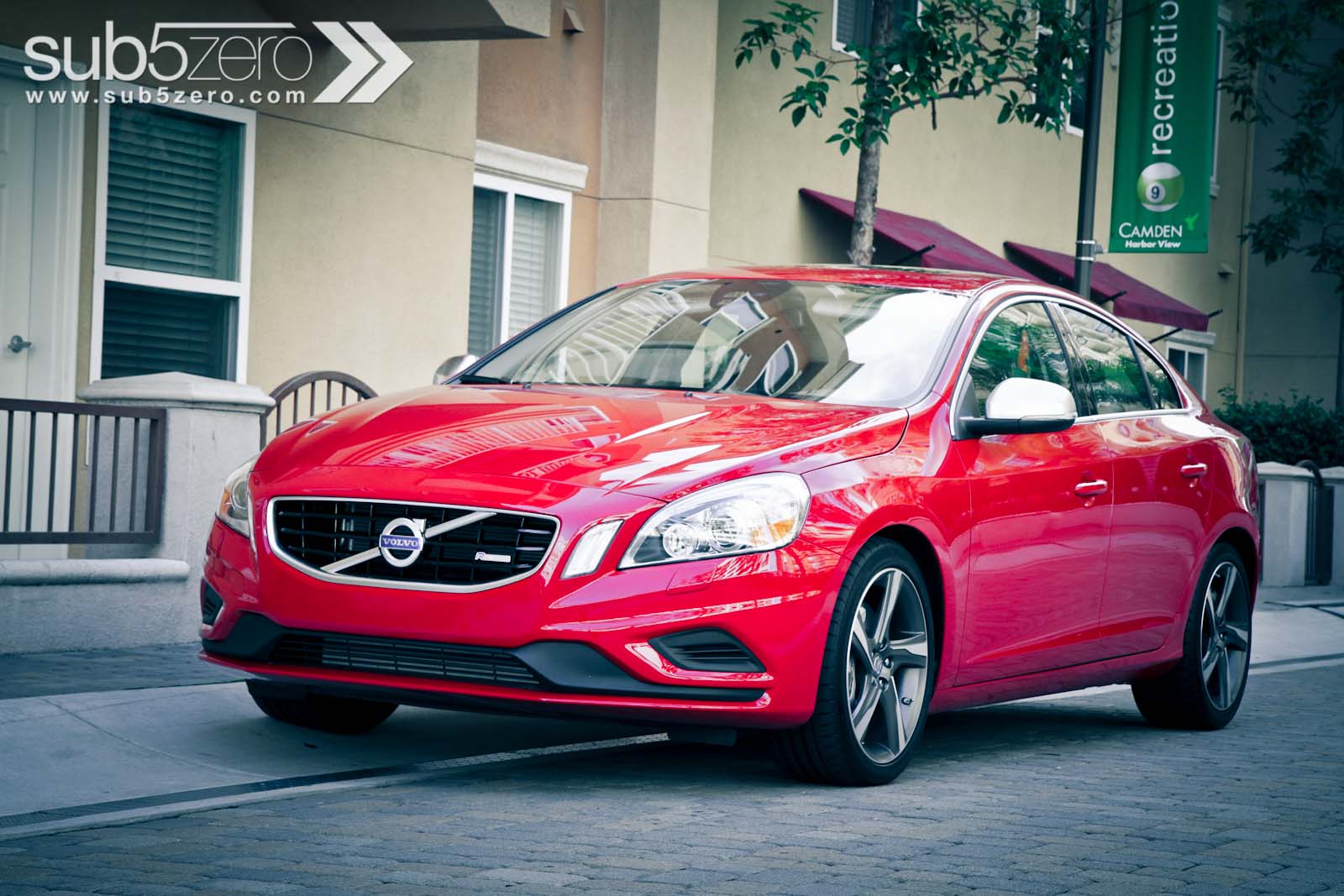 Over the last decade or so, Volvo has been a little like an ADHD transfer student, changing schools and trying out different curricula with varying degrees of success, though never really nailing it. In its long and stellar career as an extraordinarily safe and reliable Swedish workhorse, Volvo has recently come through a series of ownership changes remarkably unscathed. Since hunkering down under Ford’s Premium group umbrella in 1999 and then, in 2010, coming into Zhejiang Geely Holding Group’s  possession, this Swedish stalwart is now finally settling down and looking to seriously reestablish itself in the performance arena.

Back in 1995, Volvo hooked up with Porsche and served up the game-changing T-5R, a turbo-charged version of the 850 which was good for sprints from 0-60mph in 6 seconds flat and topped out at an electronically limited 155 mph. This marked Volvo’s first attempt at targeting the enthusiast segment and was a solid first pass. During the next two years that same vehicle was offered as the 850 R and gave tremendous support to Volvo’s efforts to add a bit of hutzpah to their boxes on wheels. 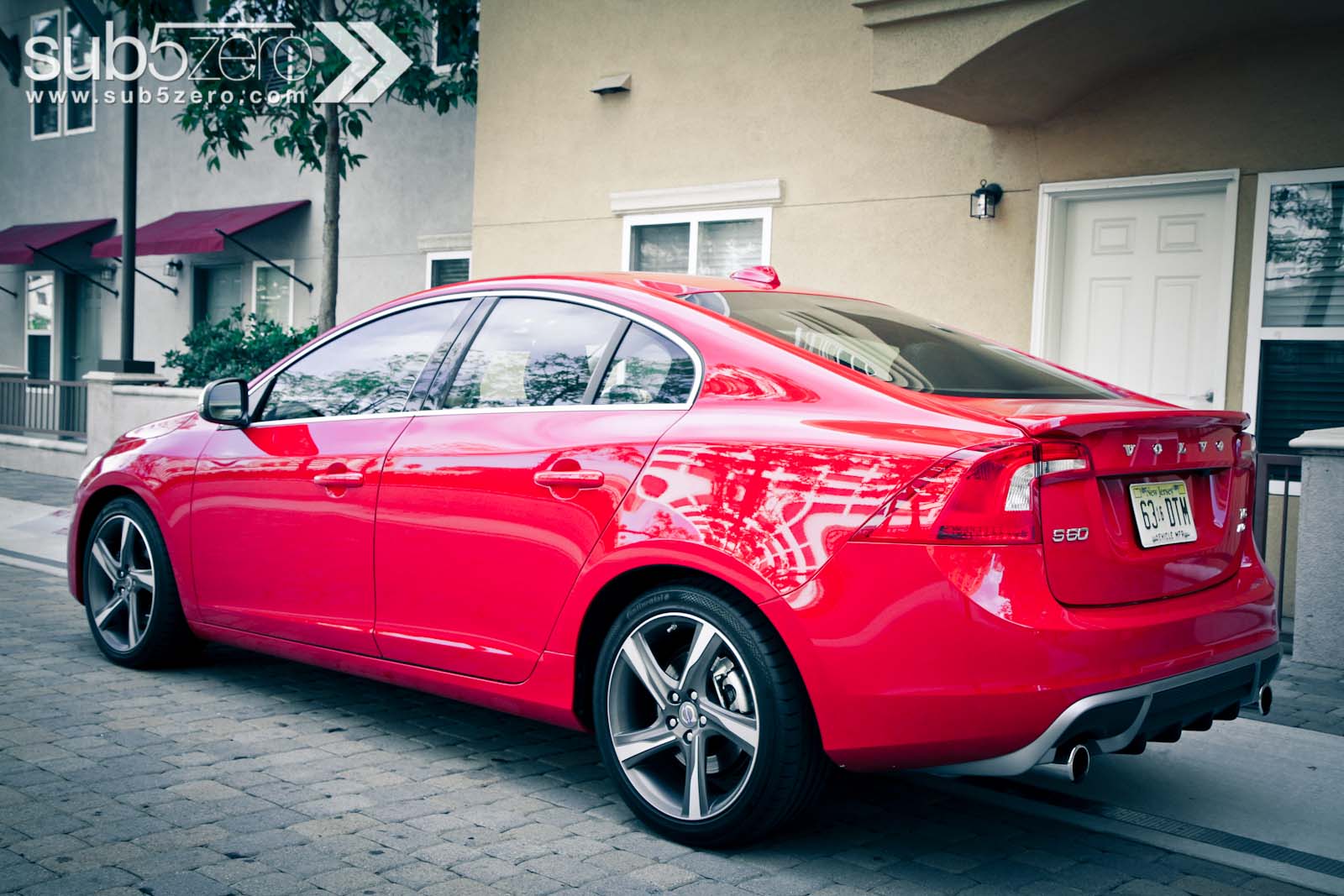 The first generation S60 actually received an R designation from 2004 through 2007 and was admittedly a strong contender. And in 2008, Volvo officially launched the R-Design which offered a styling package complete with special trim pieces, unique aluminum wheels and optimized sport suspensions across all 5 vehicles in the lineup. But this clear declaration that performance was going to finally be a lasting feature of the brand eventually turned into a failed experiment that was ultimately canceled during the last ownership transition.

Now, this campaign is back in full effect. Case in point is the 2012 Volvo S60 T6 AWD R-Design, which has been described as “the most powerful production Volvo ever” (in tandem with the XC60 R-Design). Usually we are drooling for vehicles that are only offered on the other side of the pond, but, happily, in this case, R-Design is only available in North America. Woot! Woot! US = 1, Europe = 0. 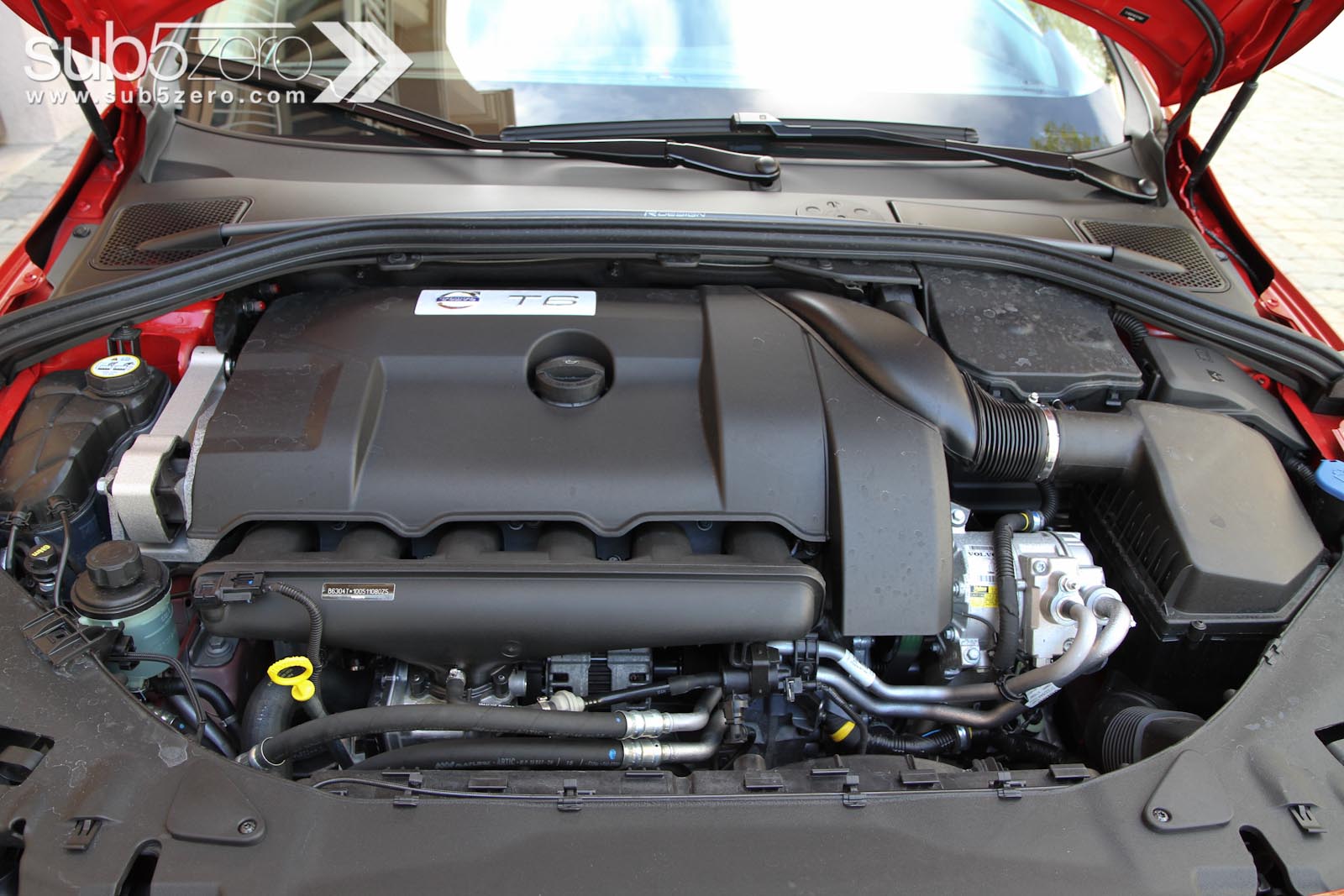 The folks at Swedish racing team Polestar were tapped for their engine tuning chops and the result is a gain of 25hp, bumping the turbocharged inline-six up to 300hp. Torque benefits as well, jumping from 325 lb-ft to 354. Sprints from 0-60mph take just 5.3 seconds on the way to an electronically limited 134mph top speed.

No work was done to the actual engine itself, but boost was upped to 14.5 psi from 13.0, spark timing was advanced and throttle response was tweaked. And in a nod to efficient engineering, fuel economy mirrors the base model at 18 mpg in the city and 26 on the highway.

As part of the R-Design program, the chassis benefits from a host of upgrades. Stiffer suspension bushings and springs, fast-reacting monotube rear dampers along with a thick front-strut tower brace all add up to better feedback and responsiveness and a tight, sturdy feel. Unfortunately, this also means the elimination of the adaptive suspension option found in its more subdued sibling. Ride height was also reduced by 0.6 inches giving the car a tad more aggressive stance. 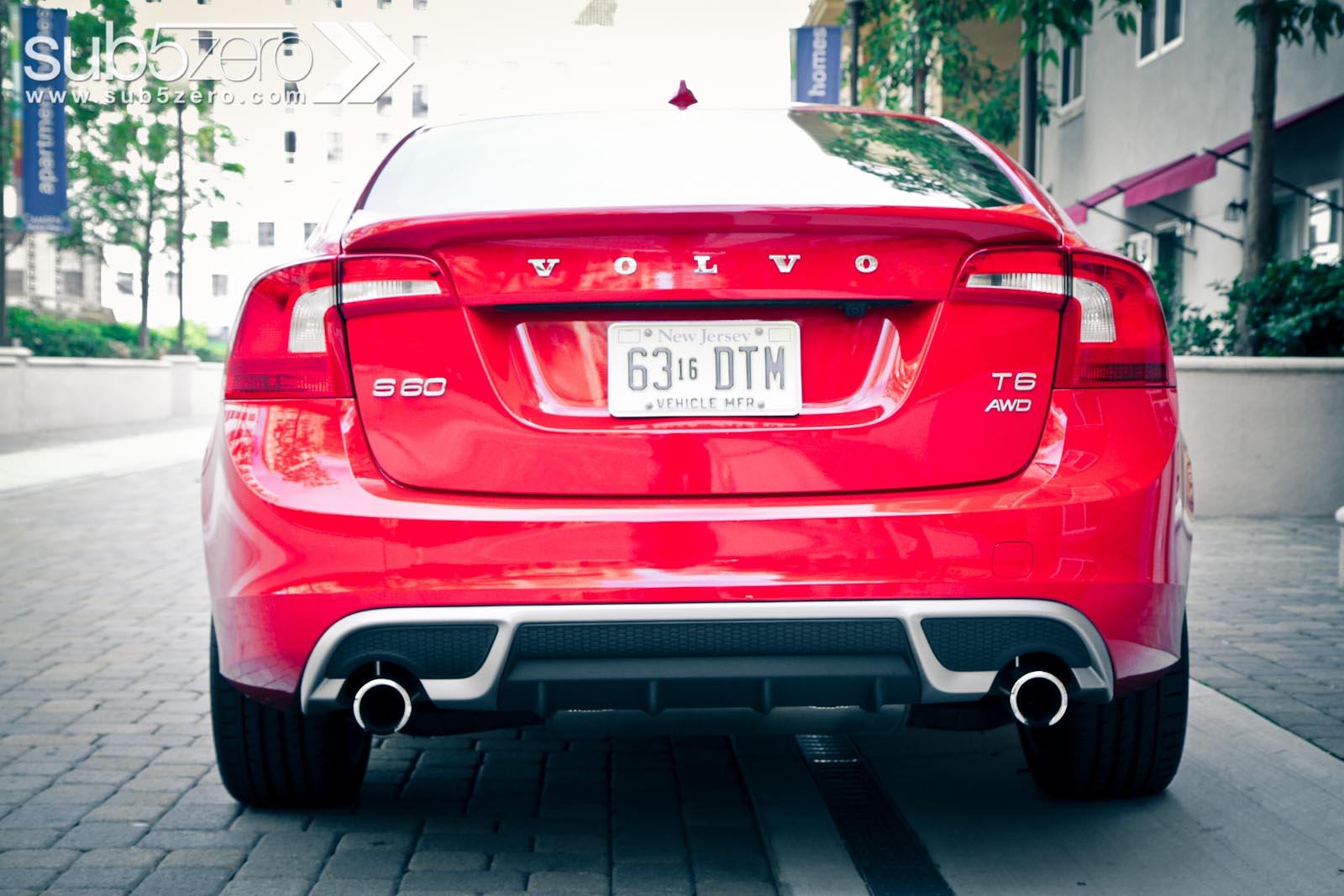 External tweaks include a revised front fascia with blacked-out grill, a rear diffuser, a deck lid spoiler and five-spoke diamond-cut 18×8-inch alloy wheels wrapped in 235/40R ContiSportContact 3 summer tires. The wheels are definitely attractive but we would have preferred a beefier package moving up to 19s. 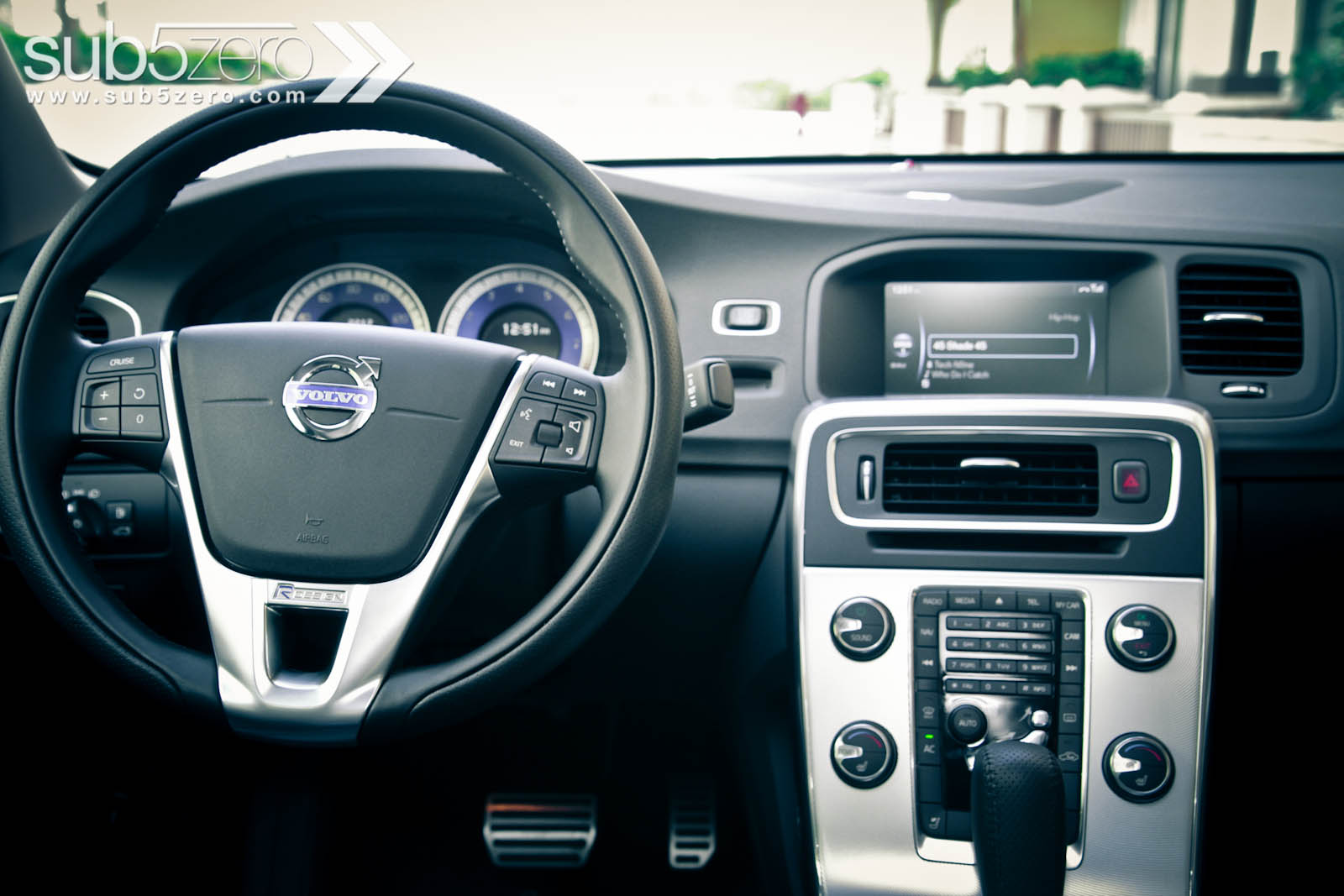 The center stack has a high tech-looking aluminum textured trim wrapped around 4 large knobs and a bevy of buttons which initially look a bit intimidating. In practice, the system is quite easy to use. The bottom portion controls the temperature functions. The two knobs on either side offer the driver and passenger the opportunity to set the AC and heat to their respective liking as well as engage the heated seats. The top portion is responsible for the multimedia system and phone functions. The large knob on the left handles volume while the one on the right controls everything from the navigation system to music selection, traversing many menu functions. 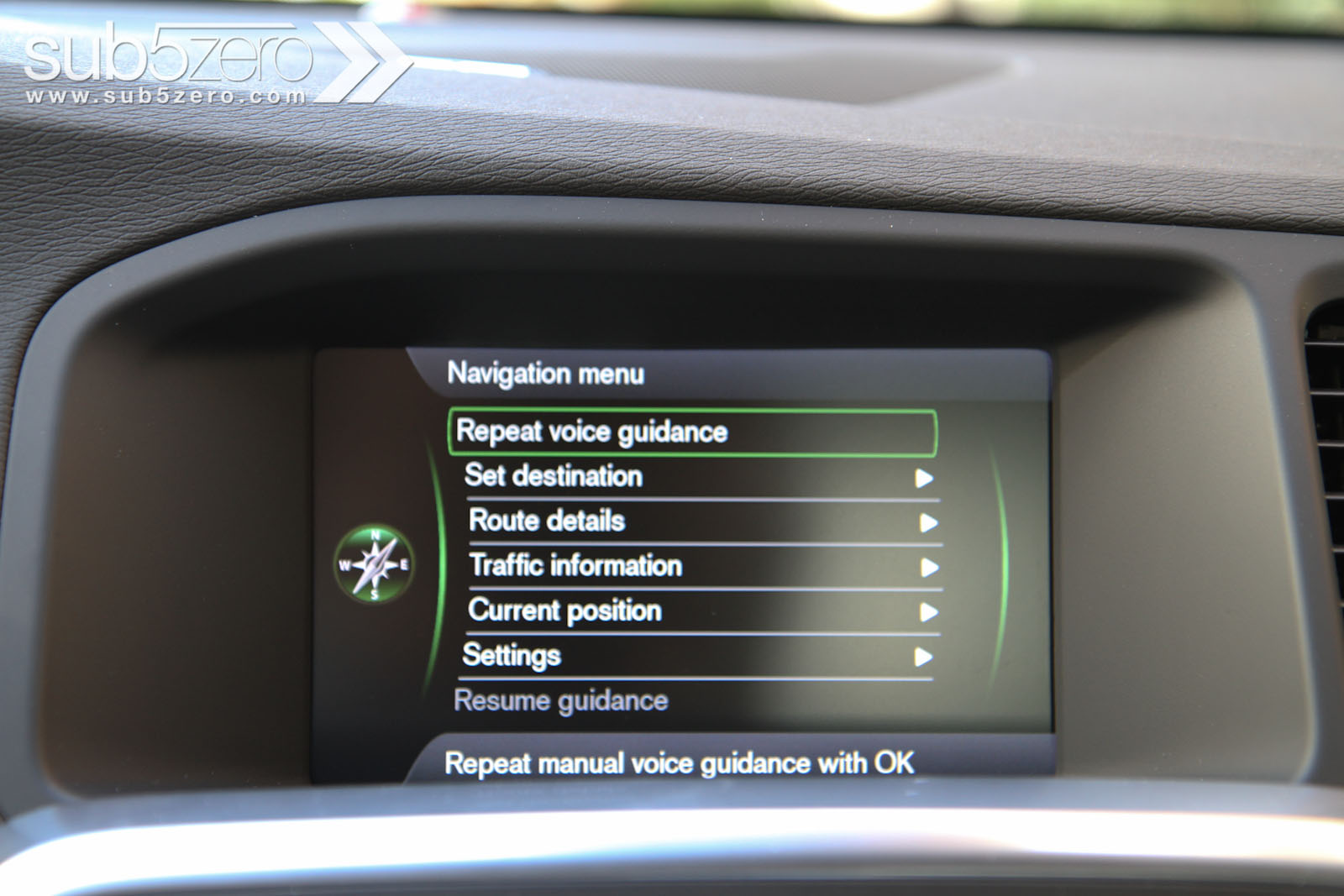 One downside is that the 7-inch LCD monitor is not touch-screen and there isn’t an especially easy way to enter information. Interacting with the digital keyboard by rotating the knob gets tiresome quickly. On a lighter note, the LCD is bright and the color scheme inviting and easy on the eyes. And the voice command system is surprisingly good, doing a solid job of getting city and street names correct on the first try. You can also use the same system to make phone calls as the Bluetooth sync works particularly well. 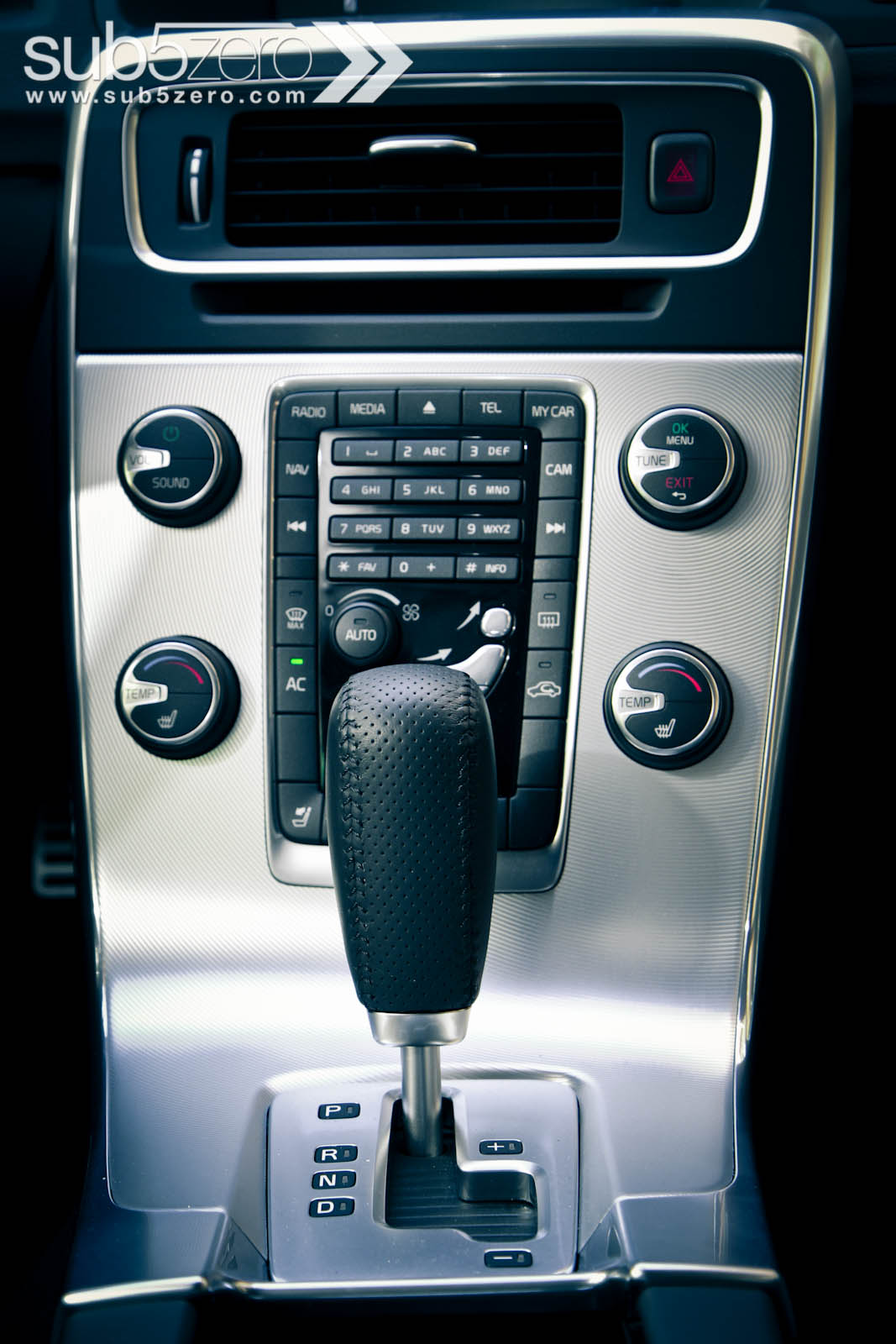 Our model came equipped with the optional Multimedia Package, which includes the Navigation System and the Volvo Premium Sound System ($2,700).  The navigation system uses maps which are nicely defined and offer impressive lane guidance, even on city streets, as well as a traffic avoidance feature that promptly recommends detours at the first sign of trouble. The Premium Sound System is pretty outstanding, incorporating 12 speakers and a 650-watt amp to deliver clean, balanced audio with a sound stage for speaker placement that was extraordinarily well-conceived. 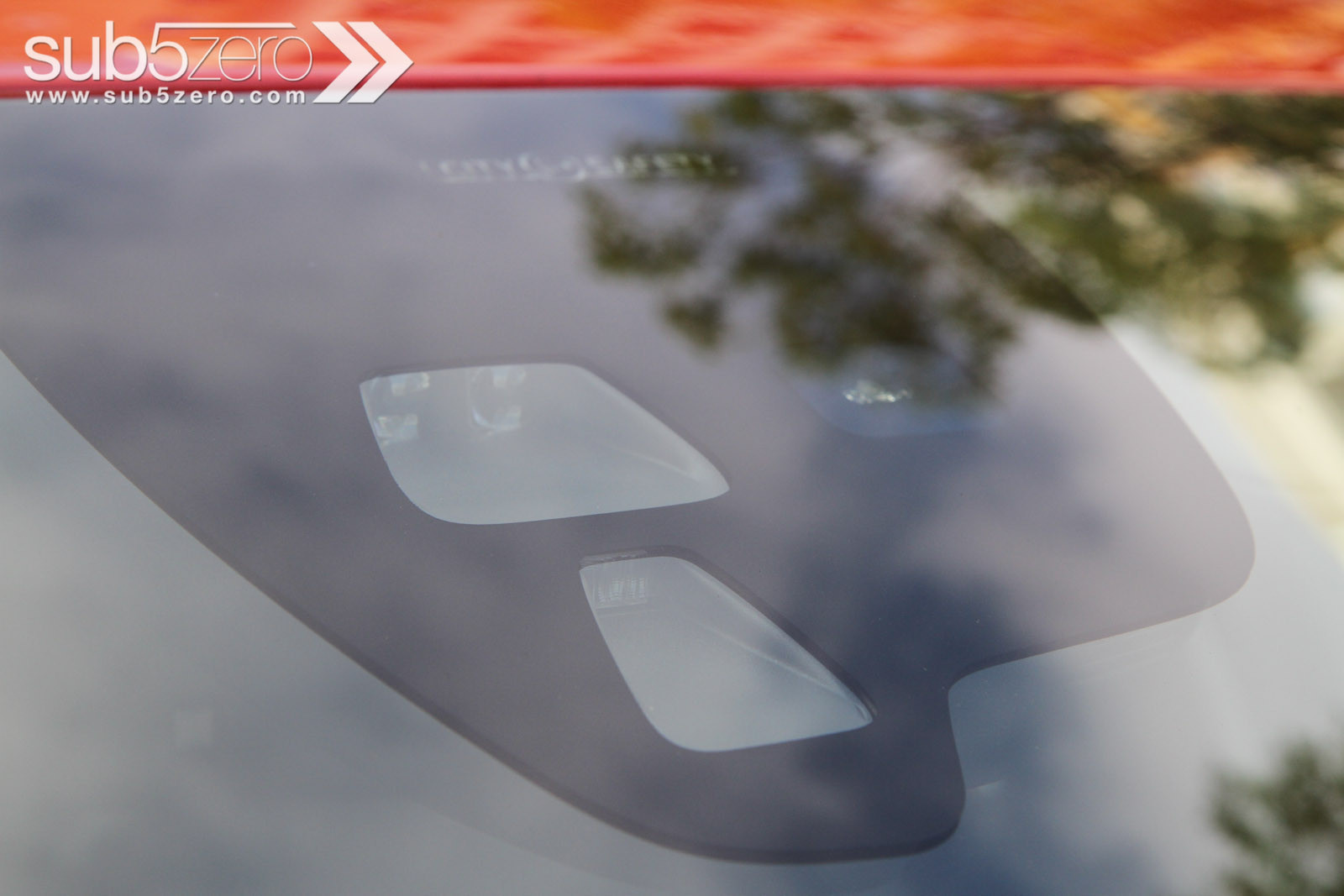 One neat feature is City Safety, which comes standard. Using a camera to scope out pedestrians and stopped vehicles, this unique innovation will automatically hit the brakes for you– if you’re traveling under 20 mph– to avoid collision. And of course a plethora of other safety features also comes standard, such as front and rear side-curtain airbags, a Side Impact Protection System (for folks up front) which inflates side airbags, a Whiplash Protection System and a Tire Pressure monitoring system among other things. 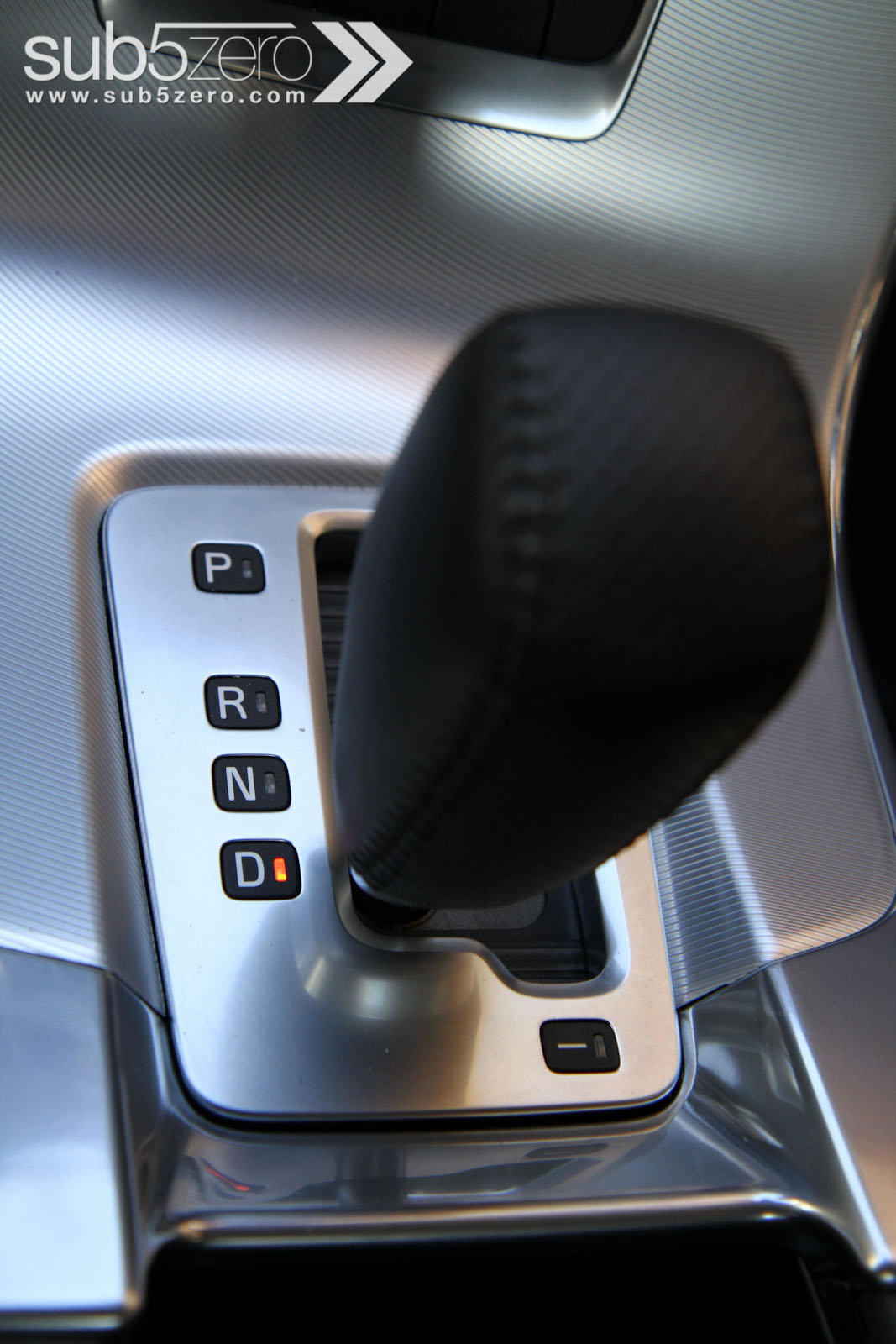 There is no denying that the Volvo S60 R-Design is a smooth operator. It is refined and   comfortable during normal cruising despite the tighter underpinnings. Steering is spot-on and there are 3 driver-adjustable modes which tweak the level of effort required to turn the wheel. But with an electrohydraulic steering rack doing the work behind the scenes there is still a lack of tire feedback, which really renders the buttons an effort in futility save for a gratuitous arm workout during your daily commute.

All-wheel drive and the Corner Traction Control torque vectoring system allow for quick transitions through corners. Essentially, CTC puts the kibosh on understeer as braking is applied to the inner wheels when more power gets fed to the outer wheels. The Dynamic Stability and Traction Control system is hard to disengage, requiring a complex 3-button dance via the menu, that only partially does the trick. That said, when set to Sport mode, DTSC only kicks in when things are about to go horribly wrong. 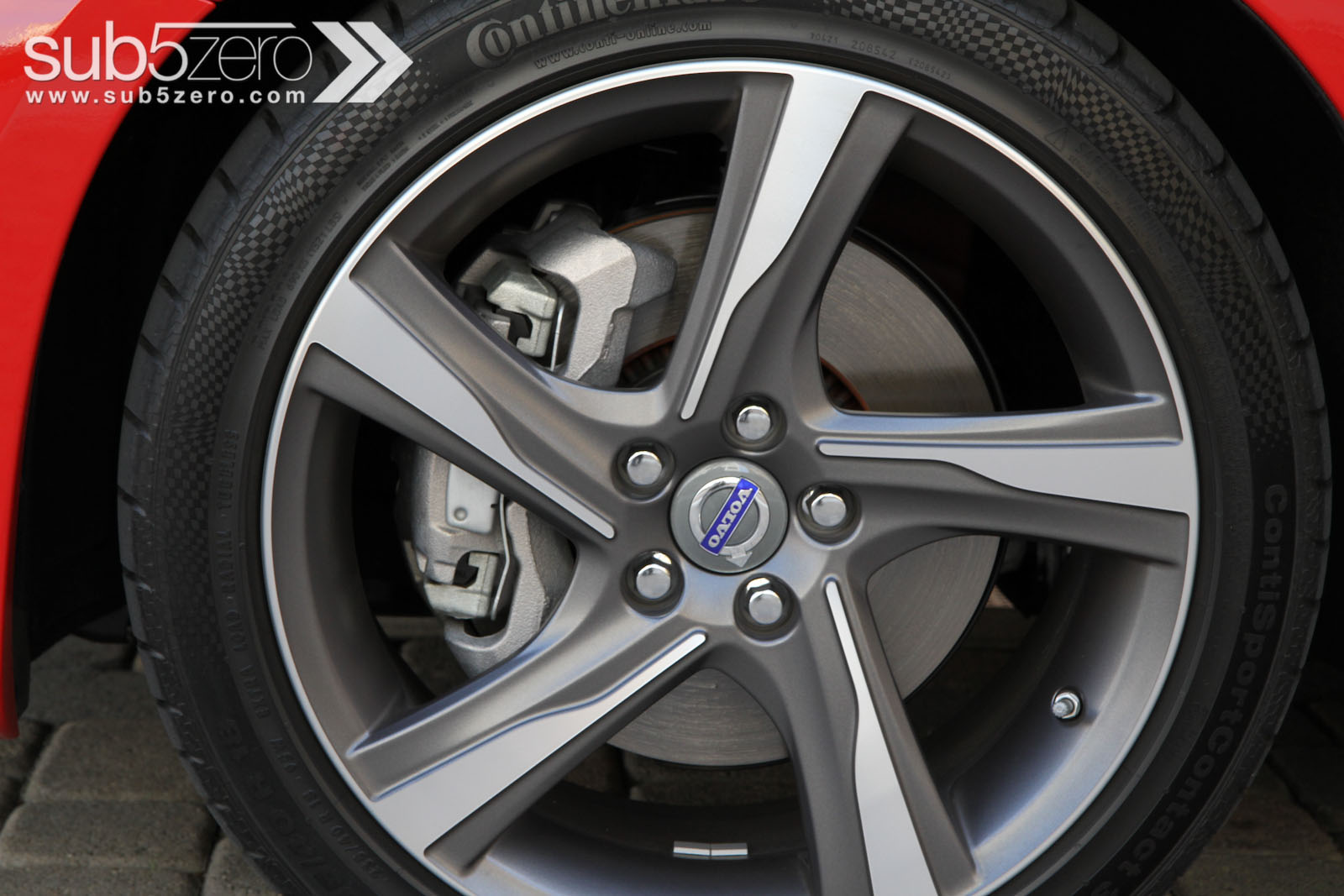 Braking is solid, with a quick initial bite and no ridiculous pedal travel. But keep in mind that the brakes are the same as on the base model, so if you brake hard and excessively (such as on a track) you’ll notice significant fade as they get hot. In addition, there isn’t much feedback before ABS kicks in if you tend to stand on the pedal more than is prudent.

All in all the car performs admirably, save for the transmission, which is just a minor letdown. The only option is an Aisin/Warner Geartronic 6-speed automatic with a Haldex all-wheel drive system which sets torque at a 90/10 front/rear bias during normal driving but can dump all of the power to the back if necessary. This slushbox seems like it was pulled from a Prius at times, as it constantly jumps to higher gears in Drive or Sport mode. We are all for saving fuel, but not at a significant hit to performance. The only work-around is to put the car in manual mode and use the sequential slot in the console level. Paddle shifters would have been a nice touch, but alas it is not to be. 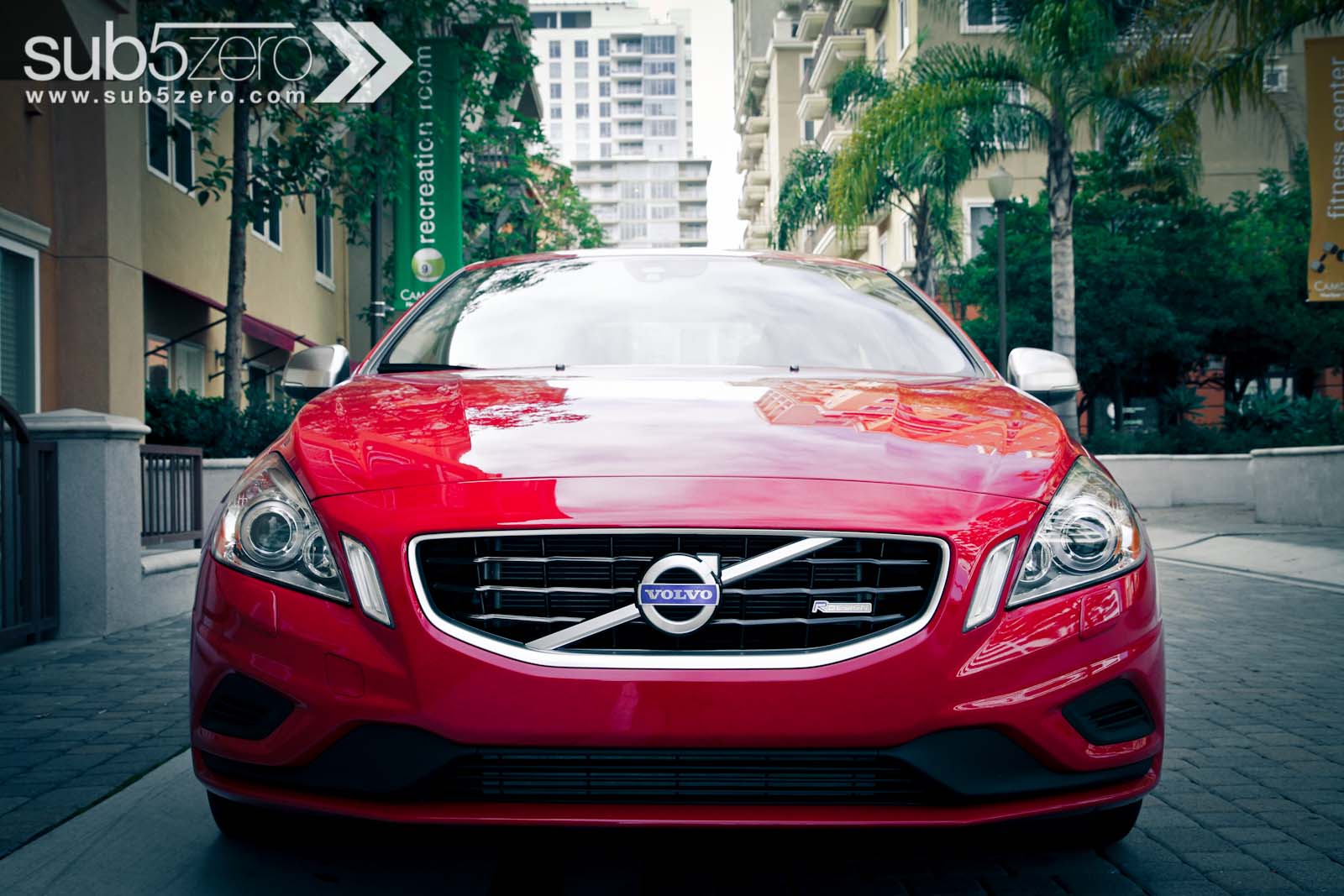 Feeling manly in a car is important to many gentlemen and the Volvo S60 (in its second generation) has definitely acquired more of both design and performance  testosterone, particularly with the introduction of an R-Design variation.  (This is good for Volvo, whose demographic tends to swing to the fairer sex due to its well-publicized safety features for chauffeuring  families in upscale suburbia.)  In fact, the 2012 Volvo S60 T6 AWD R-Design feels downright brutish at times and has enough attitude to feel more like a bully than a chump.

That said, the Volvo S60 R-Design is somewhat of an underdog in the strong field of sport sedans, going up against the likes of the Audi S4 ($48,175), Infiniti G37x ($37,800) and BMW 335i xDrive ($44,050). It gives the nod to Audi in terms of the interior and refinement but still feels lighter on its feet, enters as a much more expensive option than the Infiniti with similar power, and bests BMW on features but can’t compete with the chassis and rear-wheel drive for outright performance.

And there is always the issue that some folks may balk at the $4,500 premium for the R-Design trim, given that there is not a huge difference in performance with the base model. Our model priced out at $46,875 with the Multimedia Package ($2,700), Climate Package ($800) and Destination Charge ($875) All things considered, however, this car is still an exceptionally good value for the money and should be considered a viable contender in the sport sedan club.