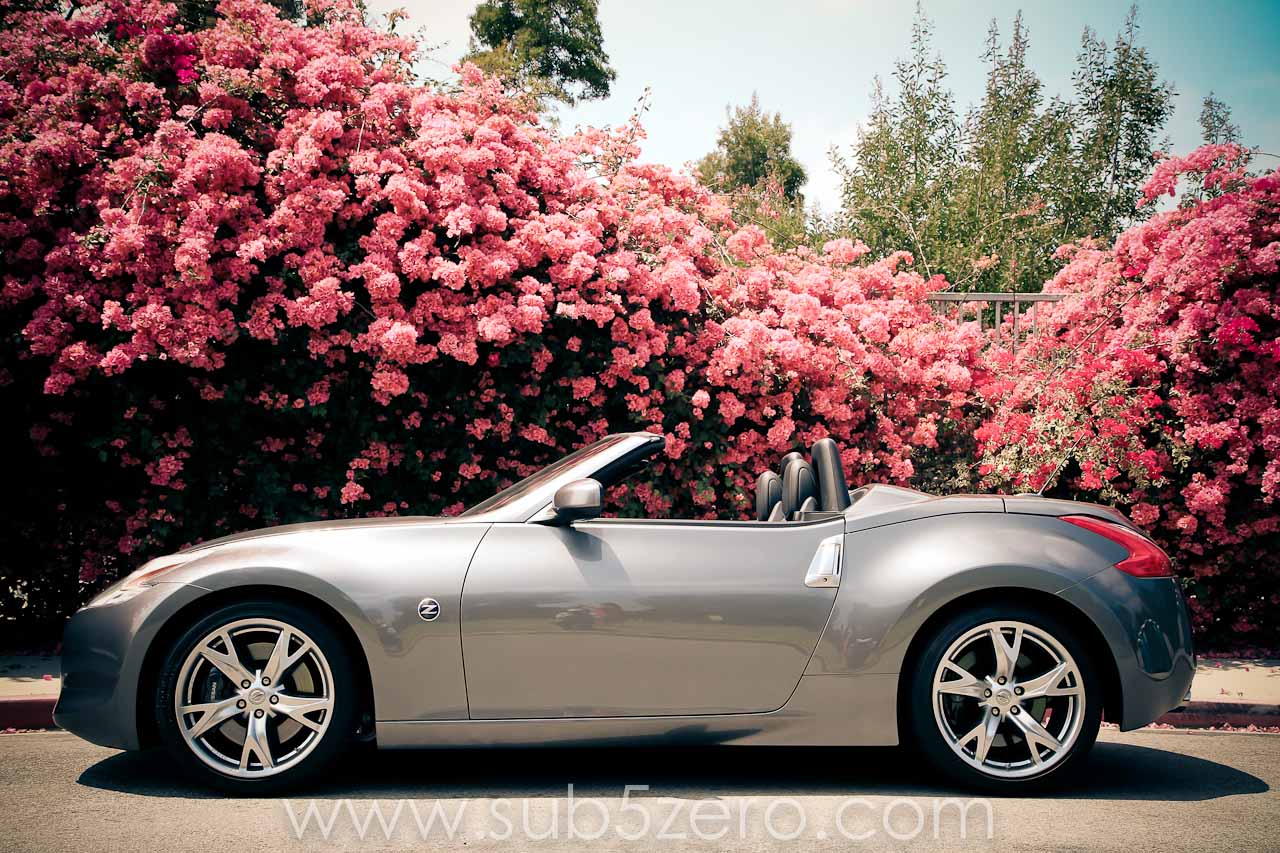 Starting with the Nissan Fairlady Z in 1969, aka Datsun 240Z for those of us stateside, this marquee has been a member of the sports car lexicon for decades. With six generations under its belt, Nissan has been able to hone the Z into a battle-tested stalwart that has risen above the ranks in a sea of stiff competition. The archetypal sports car formula is in full effect – wedge shape, two-seats, rear wheel drive, 300+ horsepower, lightweight chassis – and the 2012 Nissan 370Z Roadster arrives in a package that is fitting of its performance aspirations.

The 370Z Coupe was introduced in 2009 and quickly became a star, dropping the kind of stats and figures on both the street and the track that put much pricier vehicles to shame. And the 370Z Roadster finally silenced all of the critics of the 350Z convertible (which looked like an awkward teenager going through a growth spurt but never reaching maturation) by designing the car from the ground up with a drop-top version in mind. In any case, the revised 370Z is a stellar overhaul of the 350Z. So we set out to find where the largely unchanged 2012 Nissan Z Roadster Touring edition shines and where it can use some spit polish. 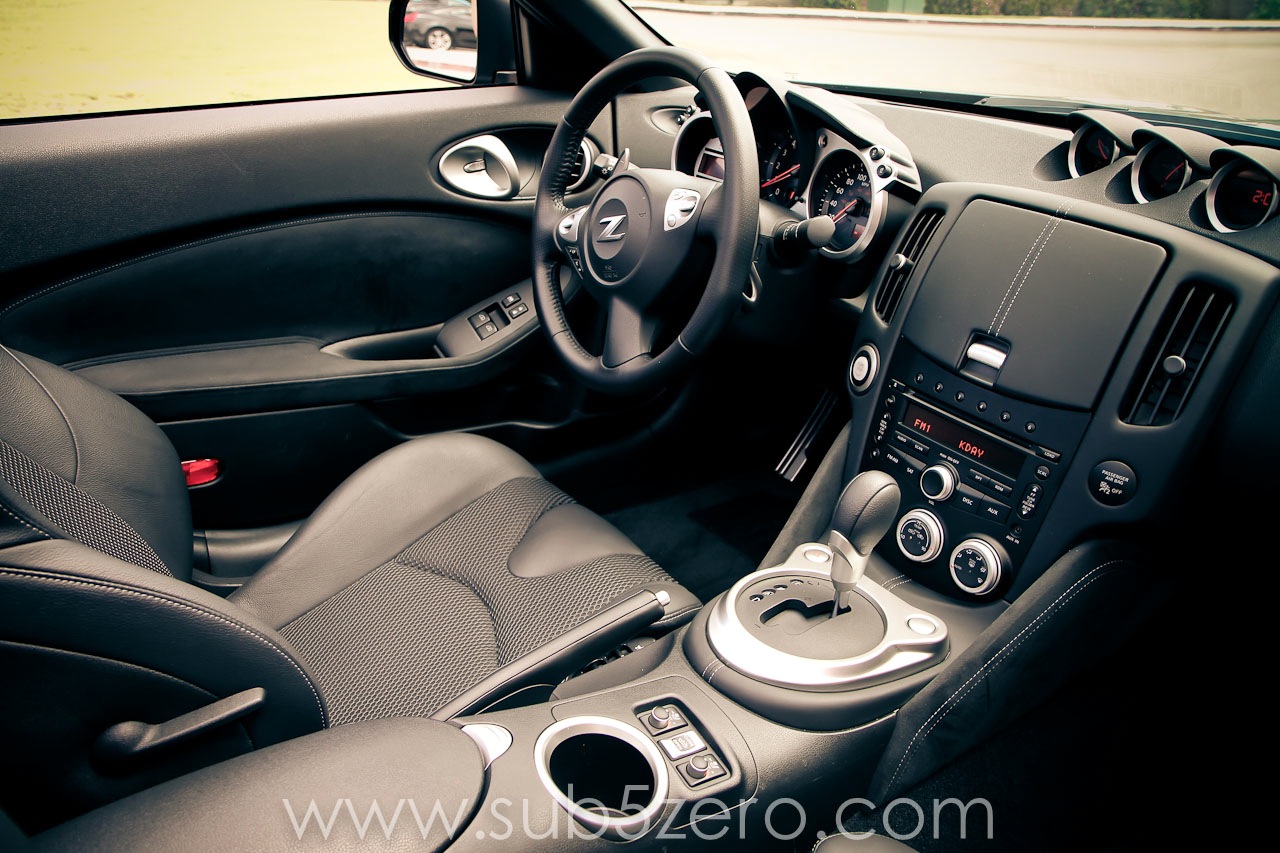 Frankly, the cabin of the 370Z is a warm and inviting place. The cloth seats are heavily bolstered with multiple padded comfort zones and a two-tone flavor of stretched black material on the outside and, on the inside,  a webbed dark gray variation on all seating surfaces which appears impervious to wear and tear. Oversized manual knobs take care of lumbar adjustments and thigh and posterior lift. The driver has 8-way seats while the passenger gets 4-way. The steering wheel is wrapped in leather and feels particularly sturdy and capable.

The cloth convertible top is very well insulated with a nice fabric headliner. Road noise is tolerable and obviously well muted by the serious attention  given to driver comfort. The large glass rear window and integrated electric rear window defroster is a welcome addition, especially for those who have to brave colder  weather.

There is no manual hatch to have to engage and disengage and the top drops with a single open/close action.  The entire process takes about 20 seconds but if you wish to speed up the process you can either push it vigorously back into its compartment or aggressively tug it along overhead. Seriously, don’t do that. Please keep all hands inside the vehicle and let the Z do its thing. The automatic latch system facilitates attachment to and release from the windshield header without any driver assistance. 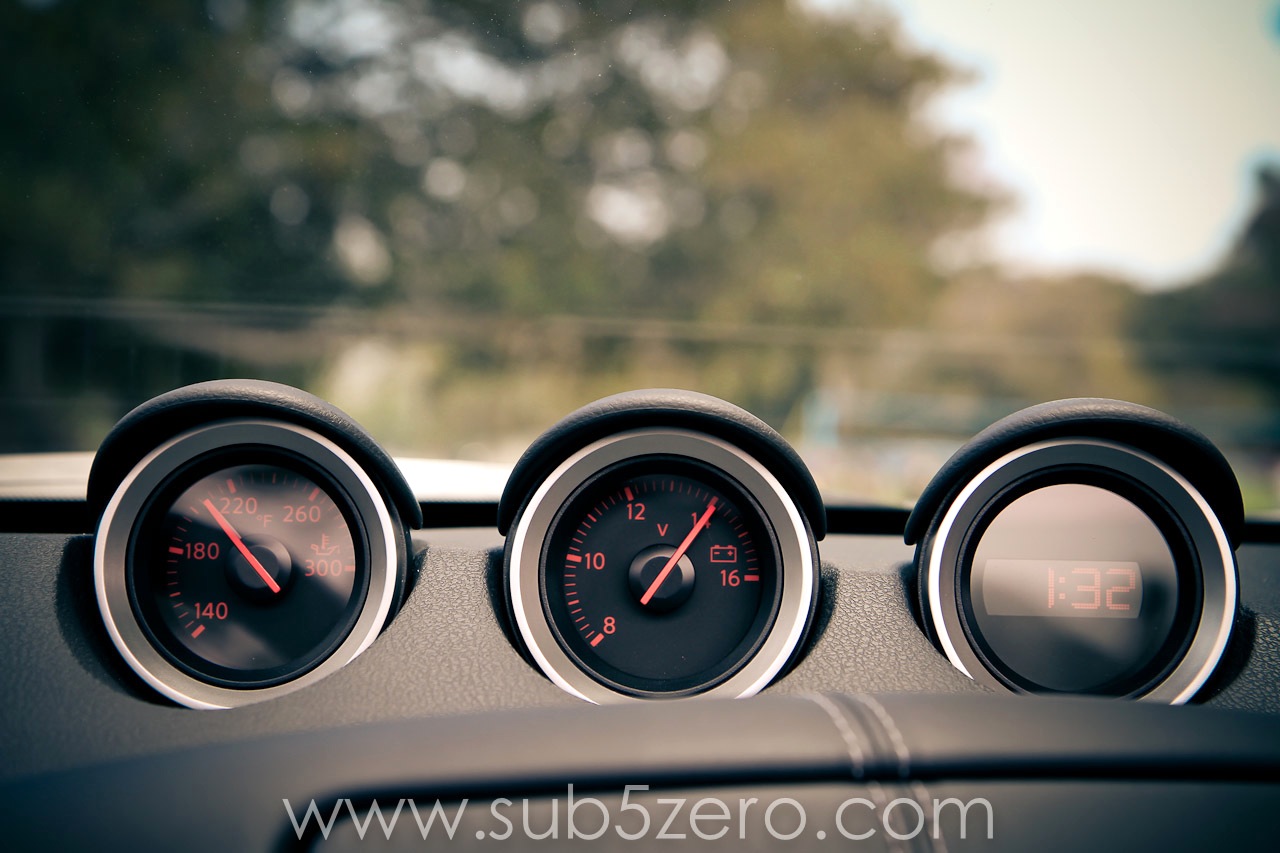 The cabin is completely driver-centric and, peering through the upper portion of the wheel, you see the classic Z-style instrument cluster with the 9000 RPM tachometer right smack in the middle and the speed gauge off to the right. On the left is a small readout screen capable of displaying various alerts and trip information buffered by the fuel and temperature gauges which come by way of horizontal rows of orange dots above and below. Whereas the 2010 Camaro SS places additional instrumentation tucked away below the dash, Nissan takes the opposite approach and posts the engine coolant temp, voltage and a digital clock in separately housed pods in the upper molding of the dash. A nice start/stop button sits at the left of the dash and initiation blips the gauges whose needles fully sweep clockwise and then back to idle. 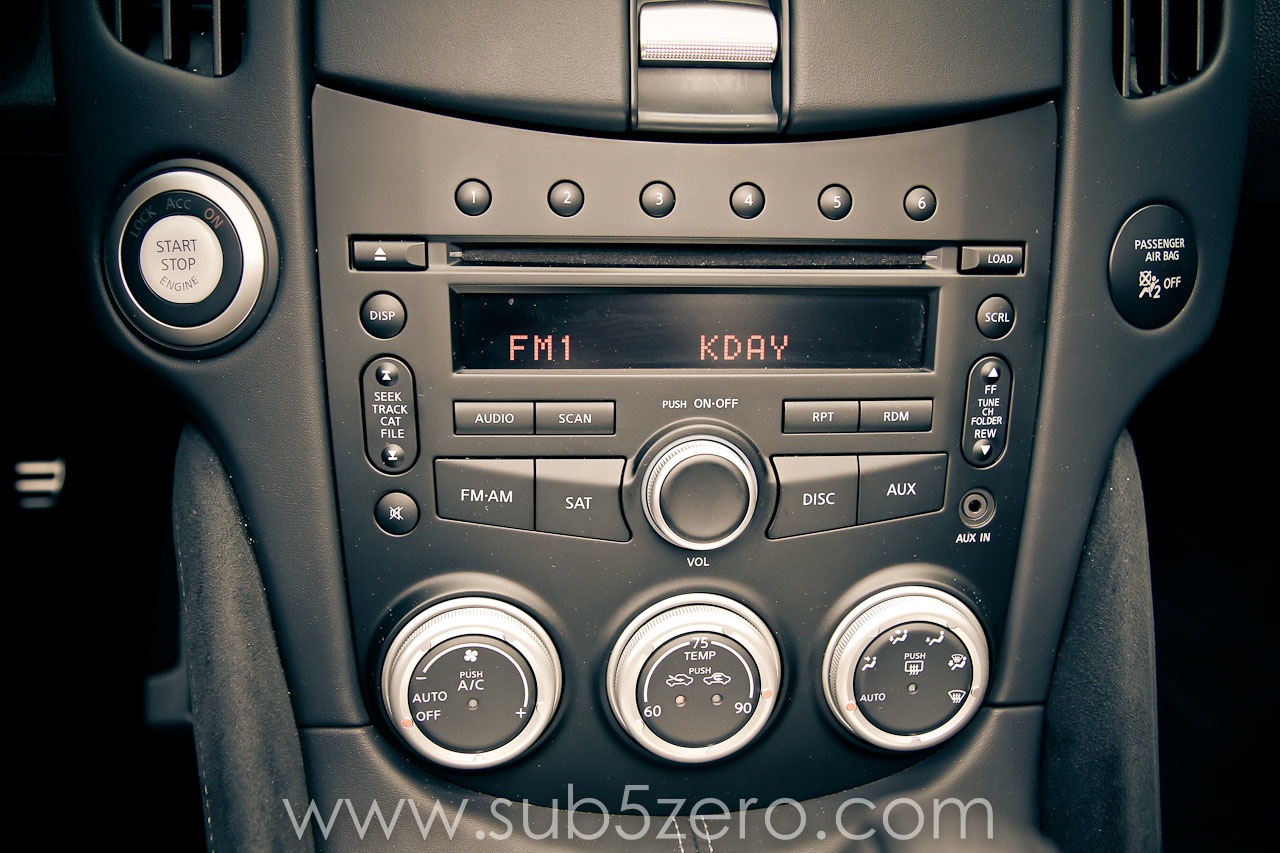 The main dash houses the audio and temperature controls which are super easy to use if nothing else. In fact the set-up is so basic that it could very well have been pulled from a Z several generations back. The only hints of technological progression are the cool metallic accent rings around the climate controls. Just above the swath of plastic that houses the am/fm radio with CD player is a nice leather cover hiding a gaping hole behind it. In Nissan's defense, the Touring model rights all wrongs by providing an optional, fully immersive navigation and audio set-up (akin to the Infinity G37) that’s quite outstanding. One nice touch is the optional illuminated kick-plates which have the iconic Z symbol glowing orange.

The attractive styling of the Nissan 370Z Roadster has  necessitated some less than ideal spacial and visibility compromises. Some neck acrobatics are necessary when backing out of parking spots or even changing lanes in heavy traffic.  We were yearning for a blind spot warning system but were comforted by the integrated backup camera found in the rear-view mirror. 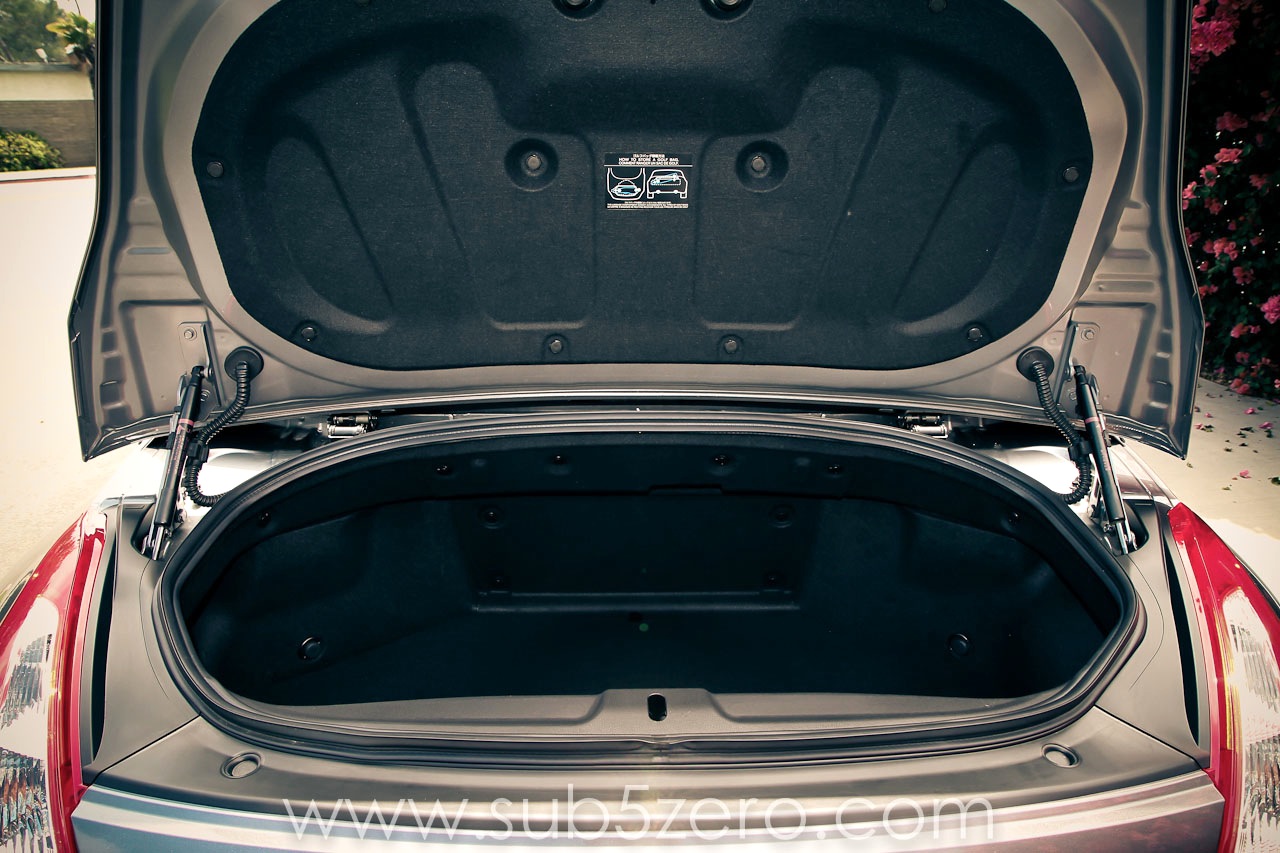 The hatchback configuration combined with the cloth top compartment only allows for 4.2 cubic feet of luggage space so, while this is a fantastic car for a weekend getaway cruising down the coast, don’t expect to pack more than a couple of overnight bags. 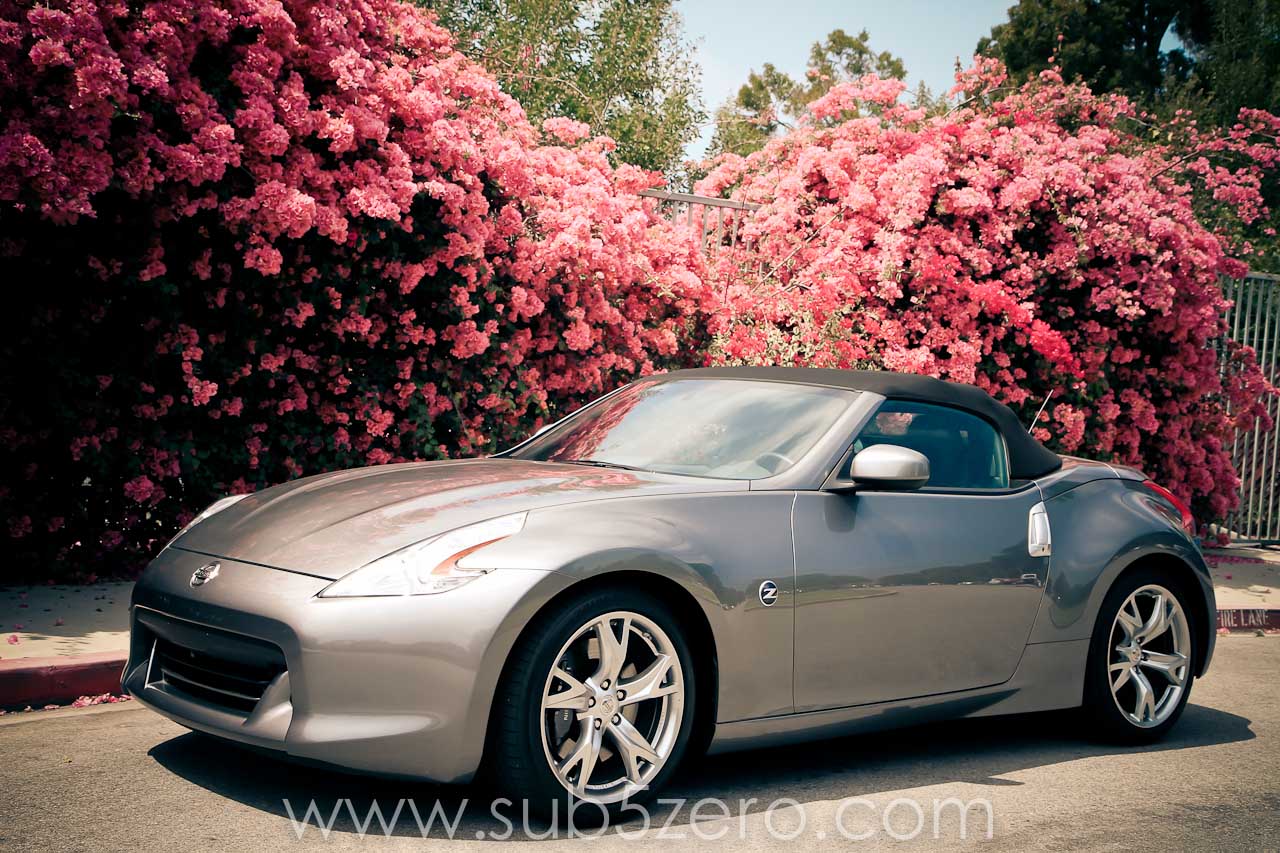 The wedge-like 2012 Nissan 370Z is 2.5 inches shorter than the old 350Z and loses 4 inches from its wheelbase, making it appear much more like a true sports coupe. It shares the same slung-back L shaped lights as the Maxima and takes similar styling cues from the GTR's roofline and windshield. The Nissan 370Z is also much more sculpted and aggressive than the 350Z. There is a front fascia with splitter spoiler, aerodynamic side sills, negative-lift rear diffuser and fully integrated rear spoiler that give the car an edgy and somewhat aftermarket look. 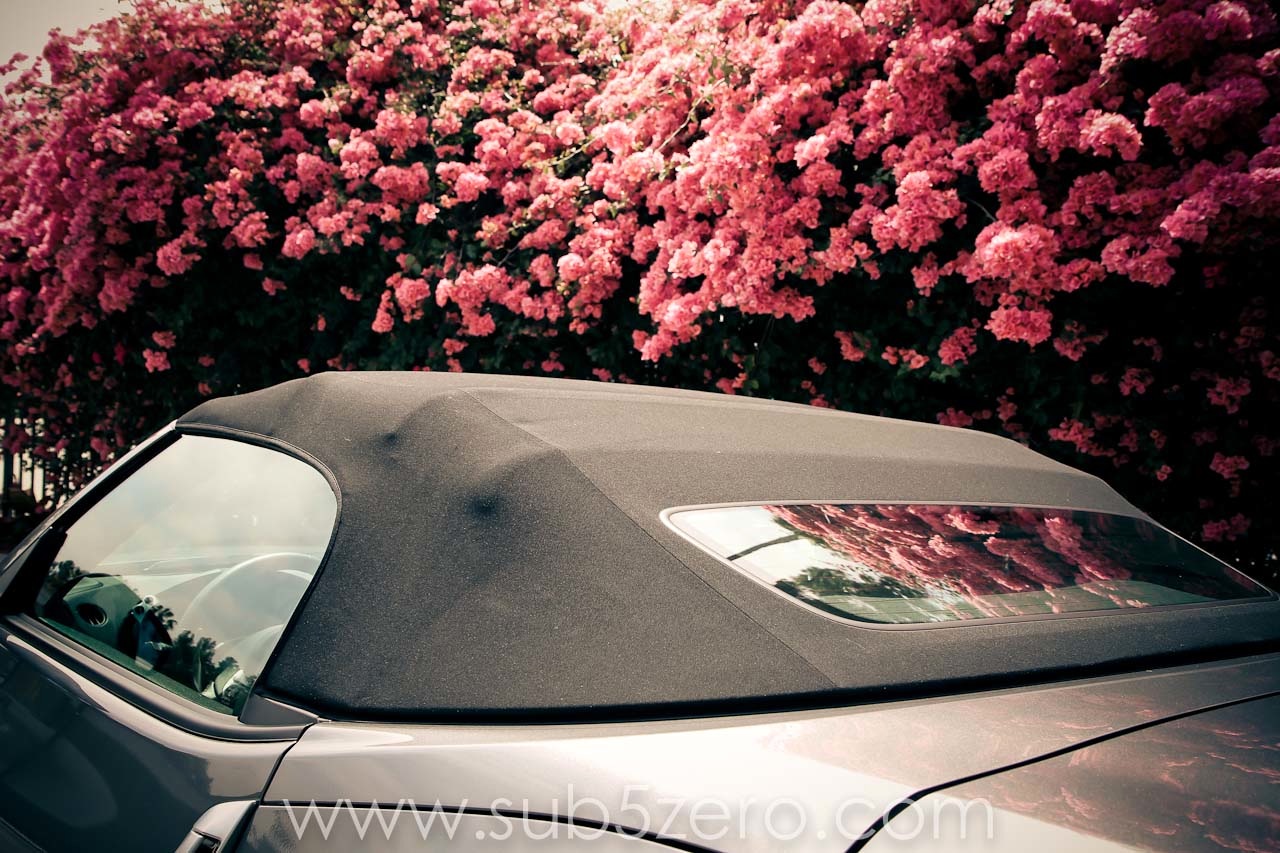 The 370Z is truly an authentic Roadster as the cloth top takes on an organic shape which doesn’t detract from the aesthetics of the car like the previous generation. The standard color is black, which always seems to look good, but you can also opt for Bordeau which, to my taste, is not so flattering. The convertible top matches the Z body with a sloped-back look that fits well with the shortened windshield and aerodynamically rounded rear deck.

When the top is down, it tucks underneath a body color matched hard tonneau cover. This “double-bubble” contoured compartment extends forward enough give the Z a classic double cockpit vibe. 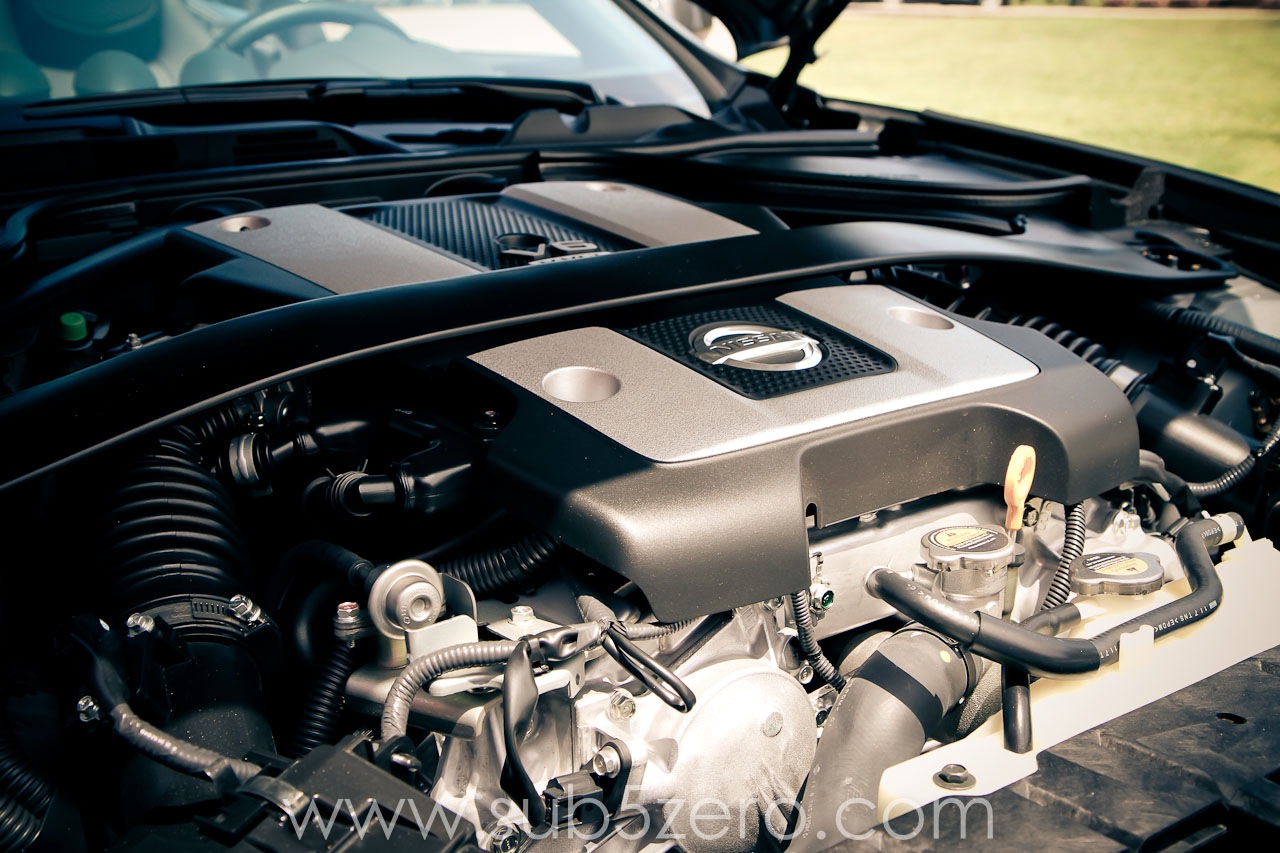 Roadsters most often give up something in the performance department due to reduced structural rigidity and the additional weight from required body fortification along with the drop-top mechanics themselves. In the case of the Z Roadster, if you don’t drive the car to its limits, you probably won’t notice any difference due to a superb job by Nissan engineers to overcome this challenge. The Z Roadster has been beefed up at the A pillars, side sills and behind the seats as well as the addition of an under body brace.

The Nissan 370Z is outfitted with a 3.7-liter DOHC 24-valve naturally-aspirated V6 aluminum-alloy engine good for 332 hp and 269 lb-ft of torque at 5200RPM. Nissan's latest VQ engine has a compression ratio of 11:1 and sports VVEL (Various Valve Event & Lift) throttle-less valve timing and lift control and loses the annoyingly sensitive throttle tip-in of previous generations. Fuel economy is rated at 18 mpg in the city and 26 mpg on the highway. 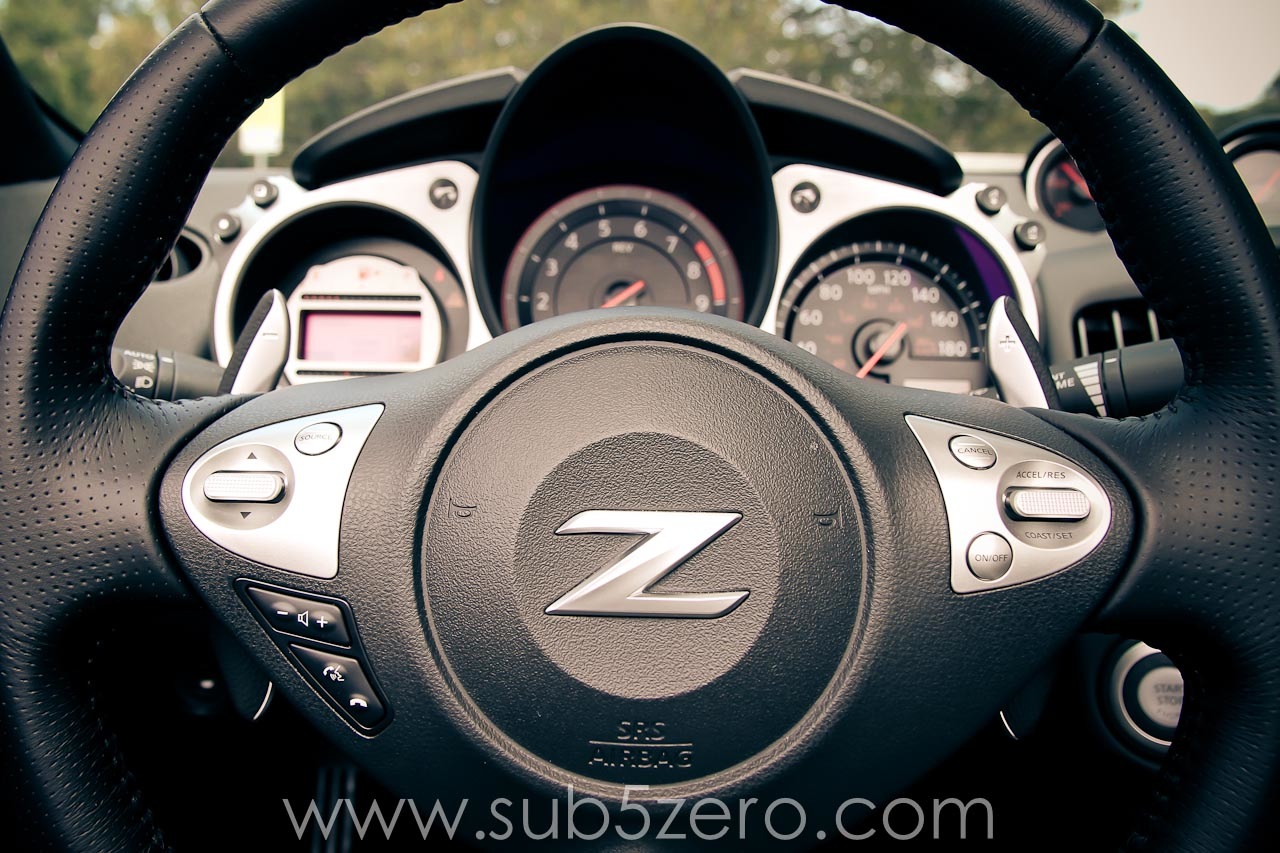 Our model came outfitted with the 7 speed automatic transmission with steering wheel-mounted paddle shifters. Gear changes take only 0.5 seconds which is pretty damn quick. Operating the car in manual mode is actually satisfying, as shifts feel purposeful and direct. Nissan’s torque converter and a unique application of the lock-up clutch in between shifts narrows the delta between the slushbox and manual gearbox.

Performance stats are world-class with 0-62 mph times as low as 4.7 seconds from experienced drivers with quarter mile times of 13.3 seconds reported. Top speed is electronically limited to 160 mph but looking at the gear ratios there's obviously much more fight left in this dog. In fact at high speeds, the 370Z is about as stable as any car we've tested. 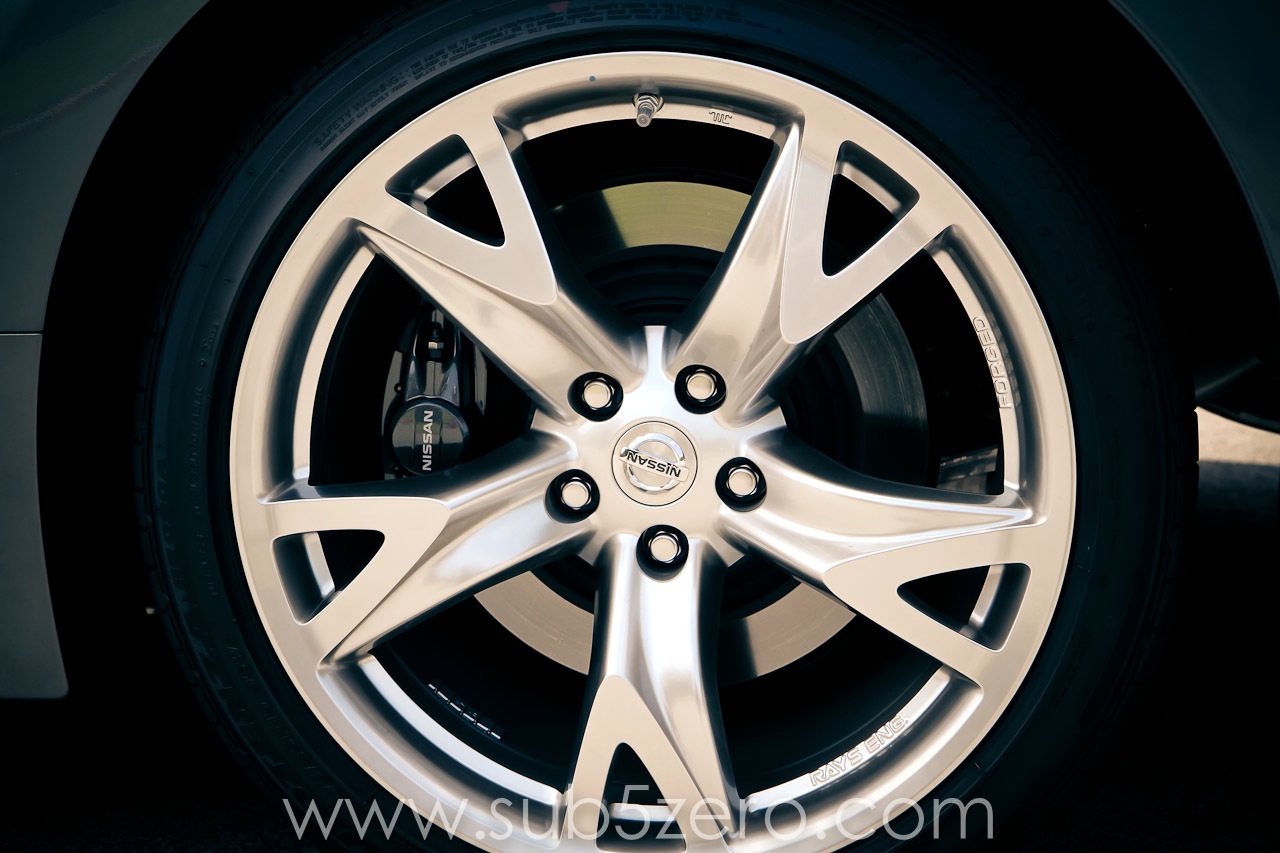 Additionally, the Sports Package offers a solid big brake kit from the folks at Akebono with four-piston calipers grabbing 14" rotors up front and twin-piston calipers clamping 13.8" rotors in back. There  is no discernible fade after continuous heavy braking and the pedal feel is completely linear and controlled. The optional ($580) NISMO performance brake pads surely can take some of the credit.

The 2012 Nissan 370Z Roadster has all of the safety equipment one would expect from a car that tempts you to do things you normally wouldn't and makes you feel like a better driver than you actually are. The Z's body structure is so stiff that it's easy to feel indestructible thanks to the front and rear stabilizer bars, a 3-point front strut tower brace and a rear underbody v-brace. 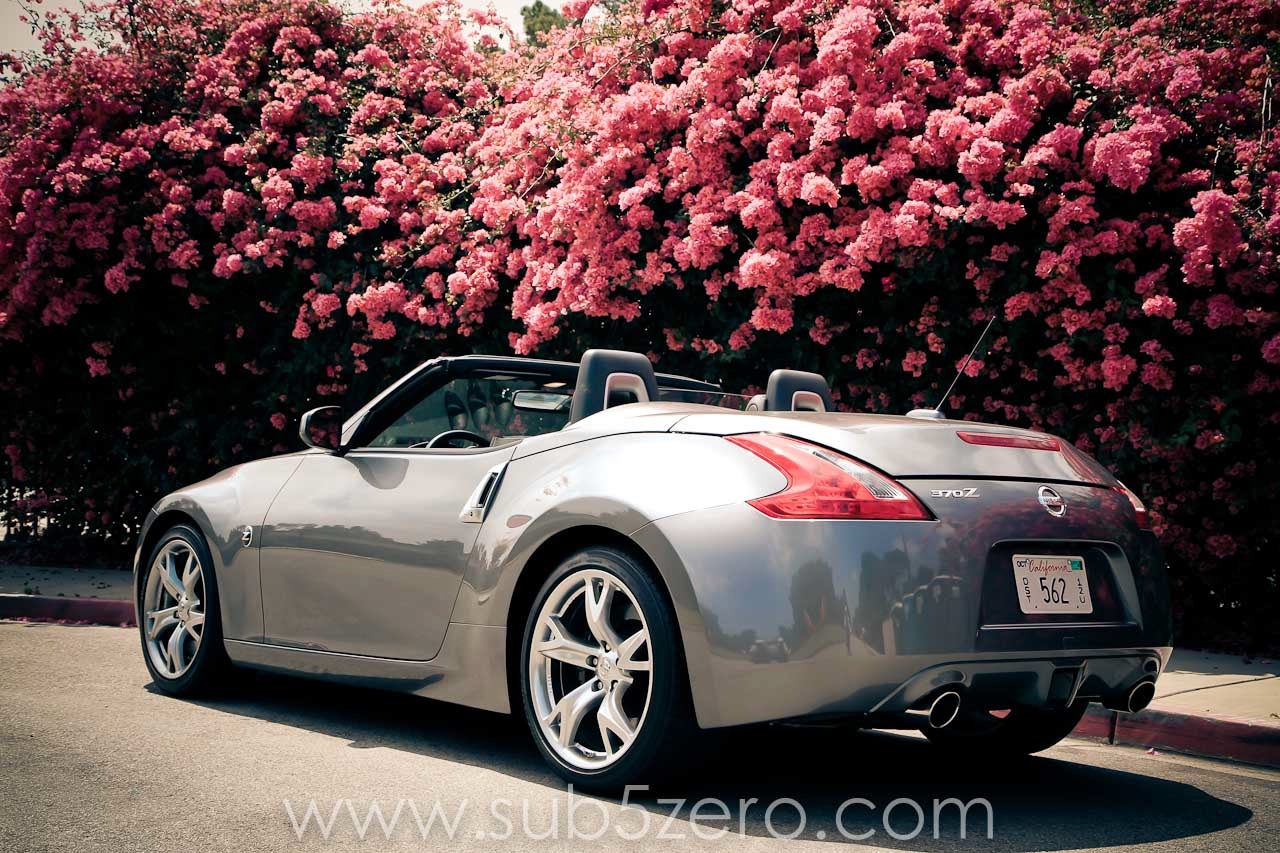 The MSRP of our 2012 Nissan 370Z Roadster Touring is $48,000 which includes the Sports Package ($2,830), rear backup camera ($795), carpeted floor mats ($125) and destination charge. Competitors include the Ford Mustang GT Convertible, Chevy Camaro SS Convertible as well as the BMW 1 Series Convertible. In this realm, the choice really comes down to personal taste – American muscle, European polish or Japanese reliability and finesse.

The Nissan 370Z Roadster isn't perfect. The larger wheel package looks super cool and provides a solid set of shoes but the amount of rear tire noise inside the cabin is sometimes overwhelming at high speeds. The drivetrain also adds its share of auditory discomfort which is odd in that Nissan claims to have increased sound insulation. And the noise that we had so hoped to hear, a throaty exhaust note, was surprisingly absent. That said, the stereo system is powerful enough to drown out any ambient sounds but, still, hearing a cell phone call is not easy. It's possible that Bluetooth may solve this minor issue but one must step up to the Touring package to get this welcome addition. And finally, there is about as much storage space as would accommodate a Dora the Explorer daypack. And then there's the issue of the large rear blind spots.

Besides these few minor quibbles, the 2012 Nissan 370Z Roadster Tour is a true rock star with class leading performance and looks to kill. And in this journalist’s eyes, it's also the perfect platform for mind-blowing modifications. For example, STILLEN offers an upgrade kit that boosts the engine output up to 515 hp by way of a Vortech V-3 Supercharger unit, a new cast aluminum intake manifold and integrated air-to-water intercooler system. In any case, if you've got a little more cash in the hopper, we’d recommend getting the Touring package which adds leather, power and heated seats, a rear cargo cover, Bose stereo with 6 speakers and 2 woofers, Bluetooth and satellite radio. Throw in the optional navigation system and you've got all the creature comforts of the European contingency coupled with the thrill of a proper sports coupe for more than a reasonable price. What’s not to love?