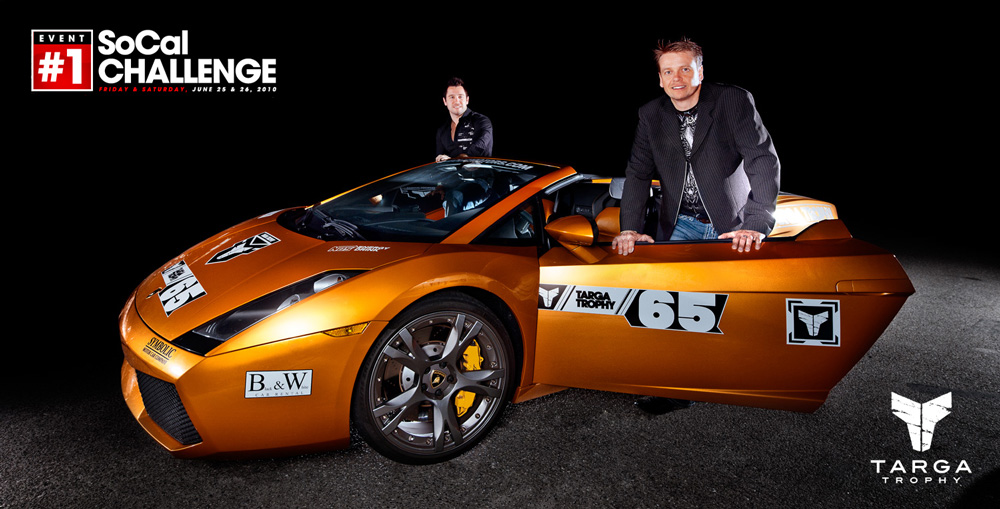 There was a lot of hype surrounding the Targa Trophy Rally 2010 SoCal Challenge. Big corporate sponsor such as W Hotels, NOS Energy Drink and HRE Wheels had signed-on, a gaggle of hot exotic cars had registered and the W Hollywood start line had expectations running high. Did it deliver?

Yupp! The car show in the lot behind the posh hotel served as the backdrop for the launch of the Targa Trophy 2010 event. 73 participating vehicles, taking the form of everything from a Lamborghini Murcielago to a Dodge Charger, sat quietly in two prime rows amongst a host of other sick rides parked up and down the asphalt. In the early morning hours, engines revved, exhaust systems growled and the racers got ready to roll. 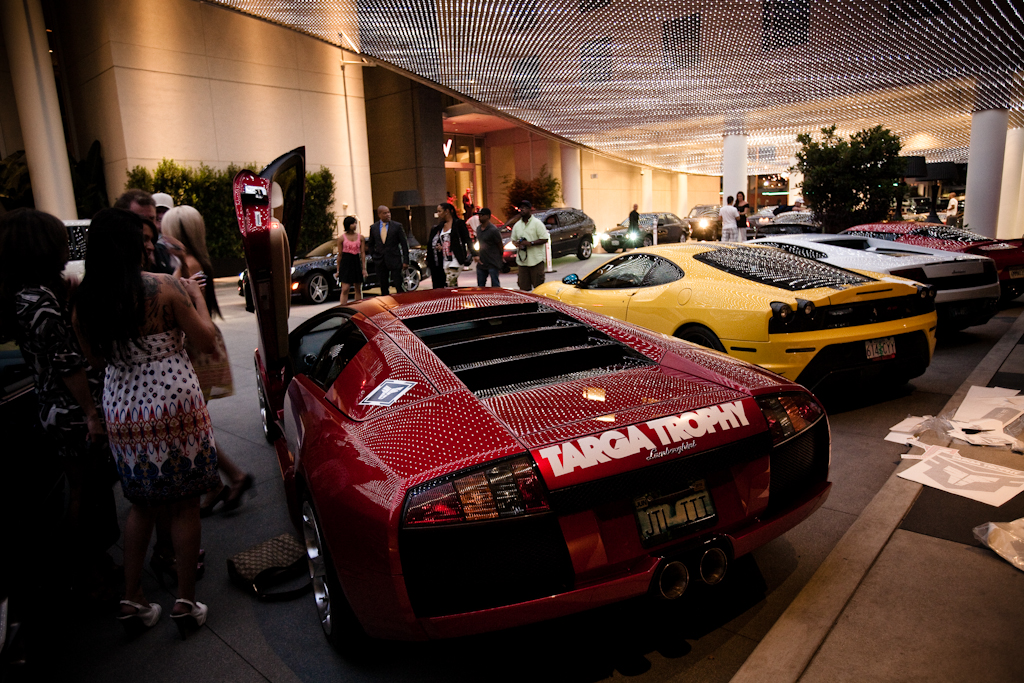 An enthusiastic crowd watched as the cars tore out of the lot one by one on their journey as a police helicopter hovered overhead. It looked like po-po might rain on the parade, but everything stayed tranquilo and proceeded without incident. The first leg was designed to test navigational mastery while the second to put the pressure on the driver. Using a point system, drivers had to hit check points closest to Targa Trophy’s predetermined times while running along a set route down to the W San Diego.

Radoslav Kalla and his team made all of the check points, stayed nearest the time and mileage espectations and walked away with first place. For his efforts, he was awarded a custom black diamond Targa Trophy pendant worth $6,000, a nice travel package, some gift certificates and what we all really want, a ticket to the Playboy Mansion.

For more particulars and full race results on the event check out the press release below. In addition, we have a full photo gallery of images from the Targa Tropy 2010 SoCal Challenge. 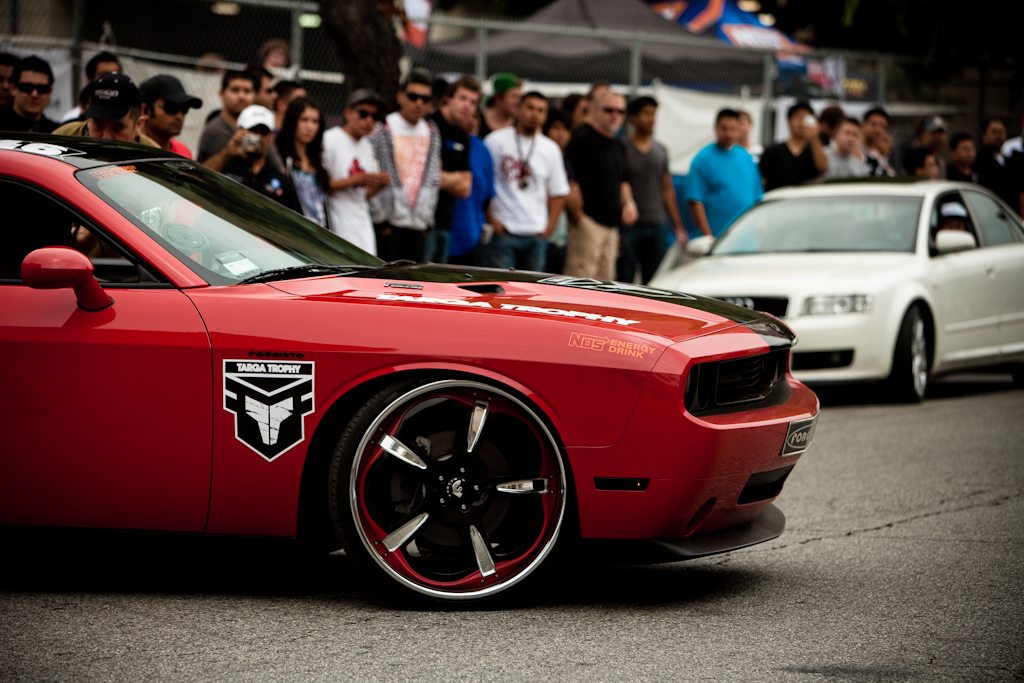 The Targa Trophy Triple Crown Series, North America’s premier automotive lifestyle rally event, kicked off in with an action-packed day that took drivers on a seven-hour course from Los Angles to San Diego last weekend. 600+ cars flanked the energy-charged starting line where 73 drivers lined up to compete for the coveted first place prizes and bragging rights. Radoslav Kalla in his Lamborghini Gallardo Spyder took home the victory and now leads the Triple Crown points chase for the championship.

“Our first event of 2010 was an enormous success,” says Jason Overell, founder of Targa Trophy. “A record number of cars started the event at W Hollywood and traversed a challenging course that took them through all types of scenery that only Southern California can offer. Look out for another course that promises to be equally challenging in our Bay Area event in August.”

The first leg of the 2010 Triple Crown Series kicked off with a 600+-car expo outside the W Hollywood organized in conjunction with SoCalEuro.com. At 10 a.m., 73 pairs of drivers and navigators lined up to depart for their finish line at the W San Diego. The course was divided into two legs; the first leg testing navigational skill and the second challenging the driver’s prowess. Through a strategic point system, drivers advanced by reaching check points nearest to the Targa Trophy predetermined time as they followed the route through stunning coastal sceneries and through deserted back roads. Kalla’s team came in first by accumulating the most points throughout the event, making all the checkpoints and staying closest to the predetermined Targa Trophy times and mileage. His prizes include a custom black diamond Targa Trophy pendant worth $6,000, travel packages, automotive gift certificates and even a ticket to the Playboy Mansion.

“Targa Trophy did a great job in organizing the event and everything went very smooth,” said Kalla. “This was by far my best rally experience.”

Targa Trophy continues its 2010 Triple Crown Series August 27-28, 2010 in San Francisco’s Bay Area with the starting line at the W San Francisco and finishing at the W Silicon Valley. The finale event will be a desert challenge on October 15-16, 2010.

The fourth annual Targa Trophy Triple Crown Championship road rally event series is back for a new year, this time partnered with select venues of the luxury hospitality brand W hotels, to create the ultimate road rally and lifestyle event in North America. This year’s series captures the essence of combining contemporary automotive and luxury lifestyle genres that haven’t been previously explored by other automotive events. For the first time, Targa Trophy stretches to three key markets with five W hotel properties acting as the official host venues, from W Hollywood to W San Diego June 25 & 26, W San Francisco to W Silicone Valley August 27 & 28, and ending in W Scottsdale, Arizona October 22 & 23. It’s a scene of privately owned specialty sports cars and their owners driving on strategically mapped routes through some of America’s finest cities and back roads. Pair this with top tier entertainment and authentic automotive lifestyle scenarios through live event experiences including pre- and after-parties, private receptions, and expo showcases to create the core elements of a Targa Trophy event. It integrates not just car culture, but fashion, film and music, all integral elements for both W hotels and Targa Trophy. Road rally entrants are subject to eligibility requirements, which allow for up to 100 vehicles to compete in each rally event. For more information and to register for any rally, visit: www.targatrophy.com. 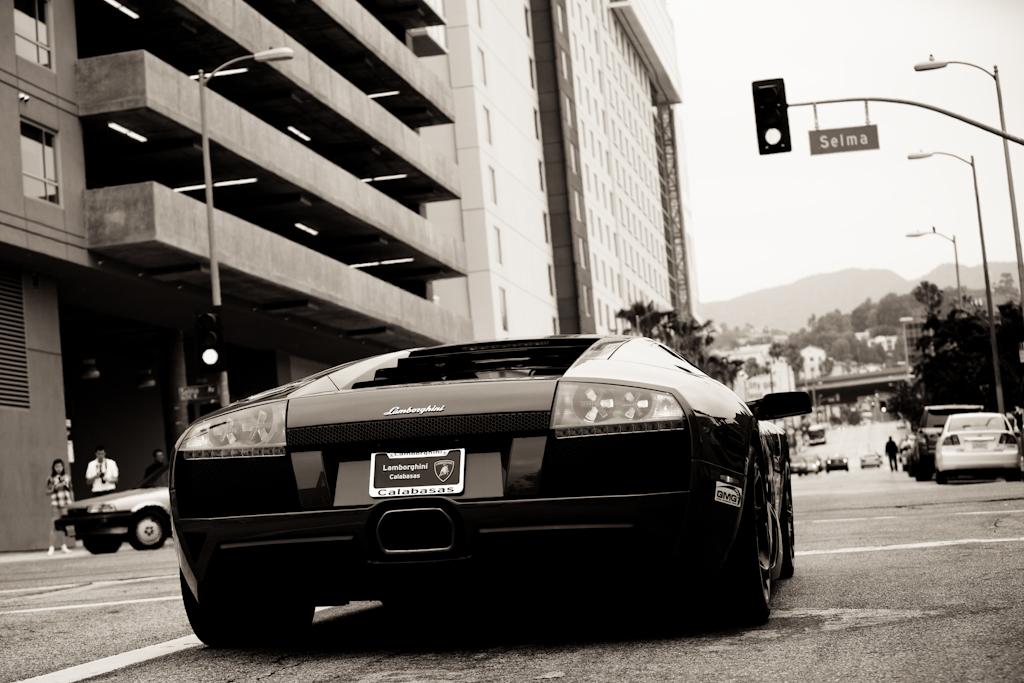