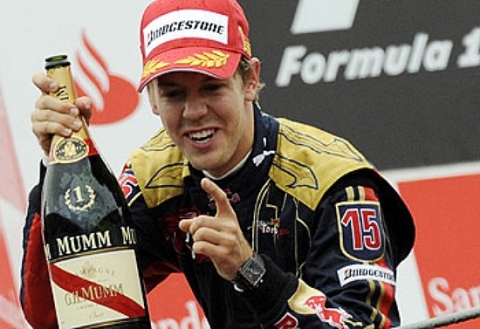 Though the 2010 Formula 1 season ended not that long ago, it’s already ancient history. That means it’s time for us to start making predictions for the 2011 season. Too early? Never…The first big thing for 2011 is a race calendar that includes a record 20 races. This schedule includes a race at a new facility in India, which Formula 1 says is contingent upon the track meeting their homologation requirements. Still, a 20-race schedule will make things that much more brutal on teams, drivers and their machines.

Formula 1 will switch to Pirelli as the series’ tire supplier for 2011. Pirelli have been doing marathon testing since August, in between selecting models for their latest calendar, of course. The final tests were run in Abu Dhabi on Tuesday at the Yas Marina circuit. During testing, Pirelli ran the first-ever tire trial at night in the wet. The tires were tested by Pedro DeLaRosa, who, naturally, declared them ready for F1 after Tuesday’s session.

If we had to, we’d put at least even money on Ferrari doing big things in the 2011 season. After a gut-wrenching 2010 that almost saw Fernando Alonso bring the Prancing Horse back from a mid-pack contender, we expect the boys in Maranello will leave no stone unturned going into this season. With Felipe Massa fully healed after last year’s frightening head injury and Alonso ready to make his presence felt again, the team has the talent. Ferrari has been down to the bottom of the F1 grid before, only to rise again with Michael Schumacher at the helm. Alonso may not be a Schumacher yet, but keep in mind the young Spaniard was a big part of chasing Schumy into retirement.

Then there are the Red Bulls of Sebastien Vettel and Mark Webber, who seem to have mended nicely from last year’s mid-season dustup, given that Vettel walked away the youngest-ever Formula 1 champion when the dust had settled. Depsite the championship victory, the team is still hungry and, apparently, extremely resilient, which will keep them near the top of the heap next year.

After a tantalizing run last year, McLaren-Mercedes, with its two English world-champs Jenson Button and Lewis Hamilton, will again be looking for another taste of glory. If both drivers can avoid their own egos long enough to pace themselves, they’ll have a hell of a race team.

Looking to make its presence felt after a long absence and disappointing return is Lotus, a team that has gone back to its classic black and gold livery, for perhaps a touch of their 1970s-era juju. In partnership with Renault, who took Alonso to two world titles, the British firm has a chance to be an unlikely contender going into the season.

Still, we’re more than a month from the series’ first real practice session, and with tests yet to start, there’s ample room for conjecture across the board. Keep your eyes peeled for more as the season draws ever closer.