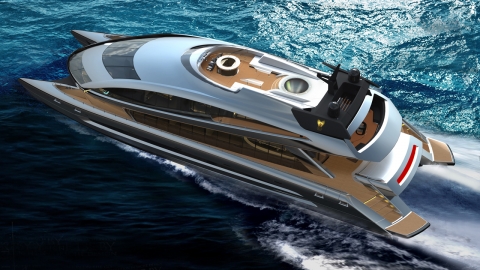 When you’ve spent the day whizzing around in your 911 Carrera 4S and you are ready to relax and take a nice little cruise what’s your preference of marine vehicle? Why not opt for the Royal Falcon Fleet RFF135 by Porsche Design? You dig their cars, so why not cop one of their yachts? Sure, other manufacturers have tried to blend automotive and nautical themes, but we’ve come a long way since the days of the Mercury Villager Nautica Edition.

Porsche Design recently dipped their toes in the water when they designed speedboats built by Fearless Yachts back in 2007. Other manufacturers have been testing the waters as well, just not to the same extent. Last year we saw the Audi Q7 Coastline and VW Caddy Topos Sail Concept take their respective parent companies one step closer to an aquatic future. However, this year, Porsche has cast off with a serious big boy toy. 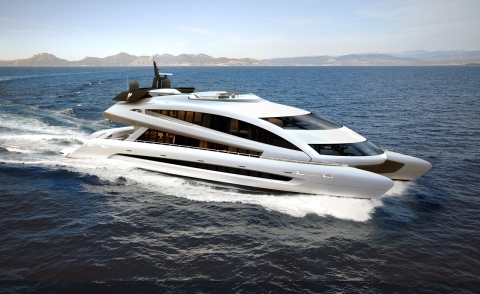 Not content with pumping out $300,000 go-fast boats, Porsche Design has teamed up with Royal Falcon Fleet to design a 135 foot twin-hull catamaran mega-yacht. This behemoth sports a 41-foot beam, 427 square meters of luxury space below deck and 208 square meters of space up top. The passenger capacity is listed at 10 guests and 10 crew. (This is a strange number. If airlines operated like that they would go broke, but you’d definitely get some kick-ass service and maybe even an extra pillow). 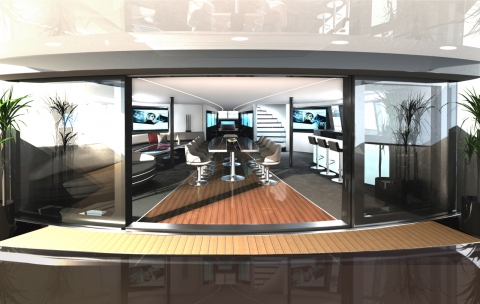 Because the Royal Falcon Fleet RFF135 is such a large catamaran, it needs some serious power to help it clip along at 35 knots. Called to task will be two V16 turbo-diesel engine from the German manufacturer MTU. Each engine is capable of producing 4,600 horsepower, which is why Bugatti is considering outfitting their upcoming supercar with the same powerplant. Just kidding… maybe… 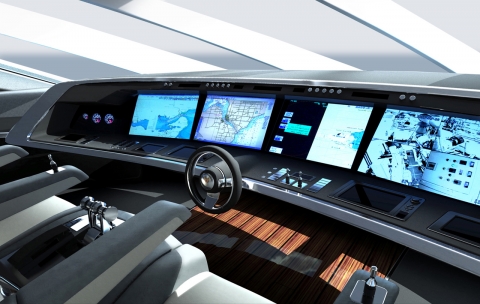 Construction first began in September of last year with completion estimated sometime towards the end of 2010. The hull of the first RFF135 is being constructed in Singapore, Royal Falcon Fleet’s home base. It will then be relocated to Sweden where Kockums, a marine technology firm, and Incat Crowther, a team of topnotch shipbuilding engineers, will help hook it up with all of the technological gizmos and interior fittings. The Kineo power yacht that Porsche Design created back in 1987 was an exclusive speedboat ahead of its time and there is no doubt that the RFF135 will be the same type of anomaly.