Paris Hilton is Getting A £200,000 Diamond Dash for Her Pink Barbie Bentley 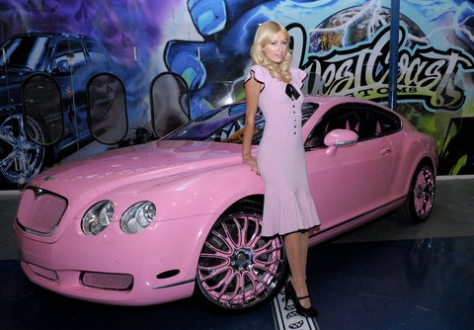 Back in December, Paris Hilton bought herself what any upper crust social debutant might self gift for Christmas – a custom pink Bentley Continental GT. First she nabbed the stock model (MSRP $155,990) and headed over to the folks at West Coast Customs and said “Pink My Ride!” There are many shades of pink and so those guys asked for more specifics for color matching purposes. And what pray tell do you match your six figure new ride to? A cheapo pink clock from The Disney Store!

And so, using this for point of reference, a custom pink paint job, pink rims, pink grill and pink air intakes ensued. The Bentley badge was swapped out with her initials. And a serious anti-paparazzi tint was applied. The interior also was “pinked out” with black accents. Paris said that she had lusted after the pink Barbie Corvette since she was a little kid. I don’t know why she didn’t just buy the original when she was like 7 but now she is happy. Or so we thought…

Paris Hilton has realized that back in Barbie’s days bling wasn’t in. But now it is big time. And so, she commissioned the folks at Bentley in Cheshire, England to make her a diamond dashboard with £200,000 worth of gemstones. Unfortunately, Paris’ cash infusion won’t be enough to stop production stoppage at the plant in Crewe, which due to the economic downturn won’t resume operations until May. But we’re pretty sure that when Bentley kicks things back up, Paris Hilton’s diamond encrusted grill will be on the first plane to LA.