VIDEO: Amazing CGI of Ford Shelby vs Camaro vs Jeep vs VAZ 2107 vs Helicopter 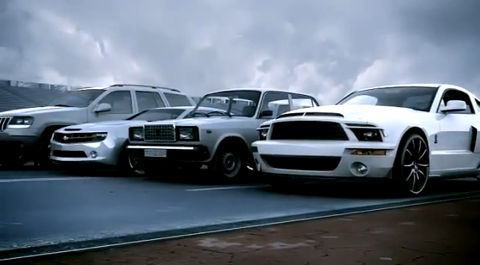 Car videos tend to span the gamut from promotional teasers to test drives to funny commercials. What you don’t see often are high-quality amateur short films created completely by computer animation. We bring to you today a fantastic CGI-based automotive showdown with vivid imagery, amazing graphics and a killer soundtrack from a mysterious man named Pantural. Back in August, one of our readers sent us a link to Pantural’s test video featuring a Ford Shelby and Vaz 2107 and we were blown away. At the time, we didn’t post anything because it was just a short clip that looked like a work in progress. Now, Pantura’s full blown car demo reel is finally finished and it is a doozy.

This creative guru has added some friends to the lineup in the initial clip and now pits the new Chevy Camaro against a Ford Shelby Mustang, Jeep Grand Cherokee and Lada Riva (aka Vaz 2107). There is even a helicopter thrown in the mix for added affect. The theme is kind of Spiderman 3-ish with a black globular symbiote attacking four normal automobiles and turning them into hellish beasts. According to Pantural’s notes, it required five days of working time with 3DS Max, Vray, Mudbox, After Effects, Photoshop, Sound Forge and Vegas. All told, rendering took 110 days. Check out this amazing video after the jump.