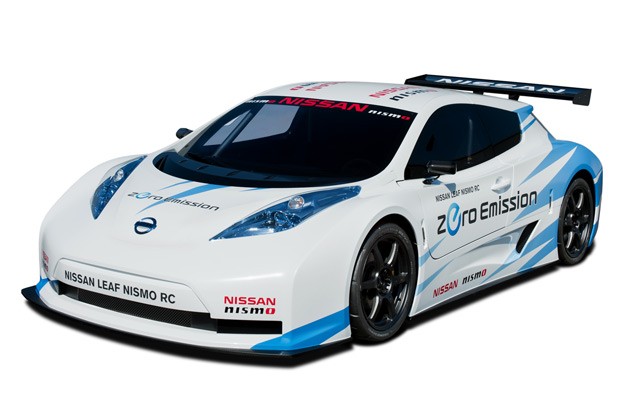 Up until very recently, electric cars had a reputation of being slow, unexciting transportation appliances (This despite the fact the fastest car in the world from 1898 to 1904 was a French electric car, the Jeantaud Duc.). Lately, though, battery-powered cars are starting to come across as legitimate performance cars, due in no small part to cars like the Tesla Roadster and the Mercedes-Benz SLS E-Cell.

Now Nissan seems to be jumping onto the exciting EV bandwagon. First was the Esflow concept, which premiered at the Geneva Motor Show last month, and now the company’s tuning arm, NISMO, has created a radical, widebody racing version of the Leaf that’s on display at the New York Auto Show. But it turns out there’s very little Leaf underneath.

As is the case with current cars in series like DTM and Super GT, the Leaf NISMO RC (short for “racing competition”) rides on a race-ready carbon fiber monocoque chassis with an integral roll cage that is wrapped in a composite body that’s shaped similarly to (and uses a few of the same pieces – such as emblems and exterior lights – as) its production counterpart. In the case of the Leaf NISMO RC, it looks like a chop-top, widebody Leaf with a wing hanging off the back of the roof. Judging by the lone photo that’s been released, it’s one mean lookin’ machine.

But instead of a high-revving V8 that idles at the same RPM where most production engines are hitting their rev limiters, or a turbocharged four-banger that’s boosted within an inch of incineration, the production Leaf’s 80 kilowatt AC motor and lithium-ion battery pack are hiding underneath. It makes the same 107hp and 207 lb.-ft of torque, and its 6.85 second 0-62 mph run and 93 mph max speed are also pretty similar to the Leaf with license plate brackets. Those figures are rather disappointing, considering it weighs just over a ton, which is about 40% less than a production Leaf.

Another disappointment (though not a completely unexpected one) is the range. Nissan says you can only run it 20 minutes at race pace before it runs out of juice. Granted, there is a quick charge system that reenergizes the batteries to 80% capacity in 30 minutes, but how exciting would those pit stops be? Maybe if the driver hopped out and played poker with the crew…nah.

Nissan says there are no plans to produce this tailpipe-free track car, but it will be demonstrating it at various motorsports events this season. The company also hints at possibly creating an electric one-make racing series in the future. While the absence of the sounds and smells provided by internal combustion engines would probably make the show a lot duller, we’d watch at least one race.

And who knows? Maybe silent racecars could pave the way for each driver having his or her own song (a la pro wrestlers) or radio ads from the team’s sponsor piped over onboard loudspeakers. Yeah, come to think of it, both those ideas suck. Recordings of real racecar engine sounds for the win; think of all the possibilities!