We all know that the last 6 months have been a whirlwind of ups and downs for the Big 3 automakers with the economy in a seemingly endless downward spiral. In the last 30 years there hasn’t been an industry shakeup the likes of this. Every flavor of corporate maneuvering has come to fruition including bankruptcies, re-orgs, spin-offs, mergers, acquisitions and leveraged buyouts. What has resulted has been a complete restructuring of the competitive landscape with most of our common knowledge of the auto industry in tatters.

With lots of fancy footwork and in some cases, heavy government goodwill, GM, Ford and Chrysler are reinvigorated and ready to actually deliver cars that consumers have been asking for. But just as the American auto industry is lean and mean and ready to take on the world, not only have the other major international companies regrouped but a fair number of upstarts both at home and abroad look to shake things up as well. Smart, BYD, Tesla and Tata are all ramping up production and gaining market share. In any case, it’s a lot to keep track of and thanks to the folks at MINT we have a visual representation of the current landscape. Check out the full graphic after the jump. 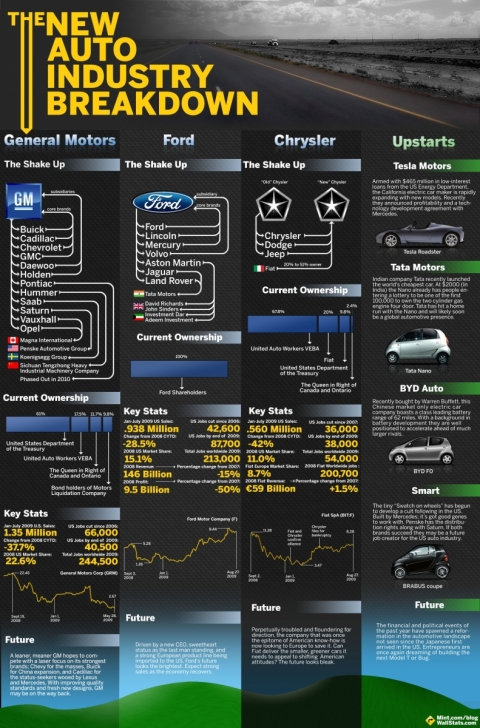