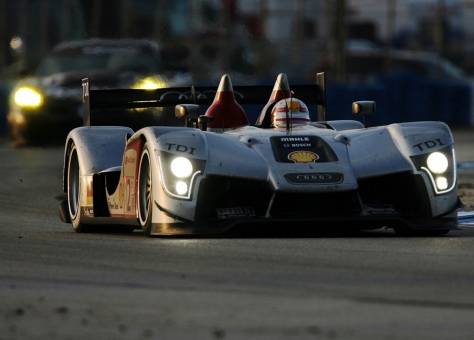 Audi is establishing quite a promising legacy at the 12 Hours of Sebring. The last three Audi prototypes – the R8 (2000), R10 TDI (2006) and R15 TDI (2009) – have all won their racing debuts in the American Le Mans P1 class. The #2 car, driven by Dindo Capello, Tom Kristensen and Allan McNish completed 383 laps, beating the old distance record by 13 laps in the fastest Sebring race ever. Despite being prototypes, the Audi R15 TDI cars ran into no technical problems during the race, thanks to a mad scramble prior to start by the crew in preparation for temperatures that were twice as high as they had previously tested and on a track that was especially bumpy.

The Audi R15 TDI driven by Allan McNish got off to a fast start, quickly moving past the pole Acura/Honda car and establishing a 5 second advantage after the first lap. However, the majority of the race was spent battling two Peugeot 908s. There were twelve lead changes between these two diesel-powered prototypes. However, the #2 R15 was able to pull off the ninth overall victory for Audi at Sebring with a 22.279 second lead over Peugeot. In addition to winning the race, Audi also won the Michellin Green X Challenge with its pair of R15s. The competition pits fuel consumption vs performance.