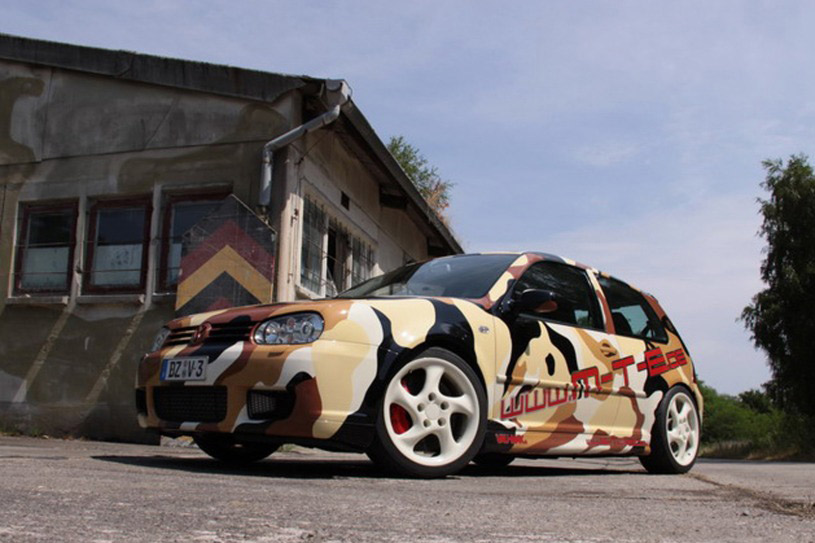 The percentage of roadgoing automobiles in the world packing in excess of 700hp is, not surprisingly, quite tiny. The biggest chunk of that slice of the vehicular population is comprised of purpose-built supercars, with the occasional late-model or classic muscle car or super-tuned Japanese sportscar thrown in for good measure. Compact hatchbacks? Even fewer and farther between, but that hasn’t stopped German tuner MTE.

You see, a few years ago the company got its collective hands on the Mk. 4 Volkswagen Golf R32 you see here. While the Porsche-look alloys and so-inconspicuous-it’s-conspicuous camoflage livery are the most obvious deviations from stock, the real news was under the hood, where the addition of two Garrett turbochargers and other go-fast hardware and software upped the 3.2L VR6’s output from 240hp to 730hp. This would be a recipie for wrist-snapping torquesteer on most hot hatches, but since both generations of R32 were all-wheel-drive, putting the power down wasn’t such a huge problem. Want proof? Hit the jump to see this bad boy pedaled up to over 190 mph on the Autobahn.

Now most folks would be satisfied with such giggle-inducing quantities of power and speed. Not so the folks at MTE. They recently went back and extracted another 55hp from the narrrow-angle six with tweaks like a freer-flowing exhaust system, reworked cylinder heads and a water/methanol injection system to bring the total up to 785 raging Pferde. Torque output totals 586 lb.-ft of twist. Both those numbers would be gobsmacking in a half-million-dollar-plus hypercar, but in a small (by American standards) three-door? Then you have quite possibly the ultimate sleeper…aside from the whole camo thing, of course.