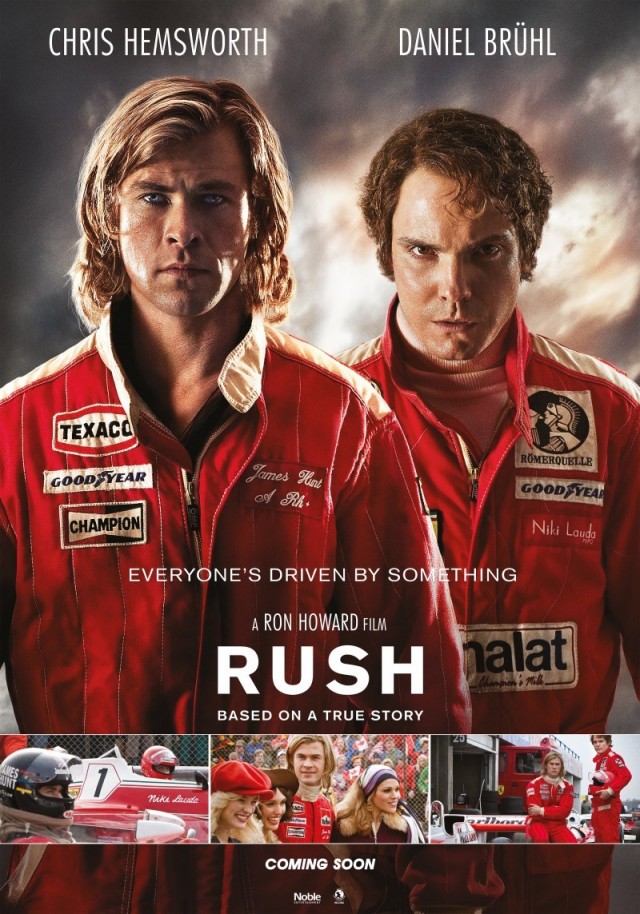 When it comes to dramatic feature films with characters based on real people and storylines based on real events, Ron Howard has seemingly had the directing market cornered for the last 20 years or so. With critically-acclaimed historical flicks like Apollo 13, A Beautiful Mind, Cinderella Man and Frost/Nixon in his back catalog, the former child star has seemingly found his celluloid storytelling niche. And Mr. Howard’s latest project to hit theaters, Rush, is yet another movie built upon the back of a true story.

Now Rush, as you’ve been seeing over the last half-a-year or so via a series of trailers, is set in a world near-and-dear to our hearts: Formula 1 racing. Specifically, it follows the dynamic between a pair of F1 legends, Niki Lauda and James Hunt. As students of the sport and its history, Rush had a lot to live up to in our eyes. So…did it? 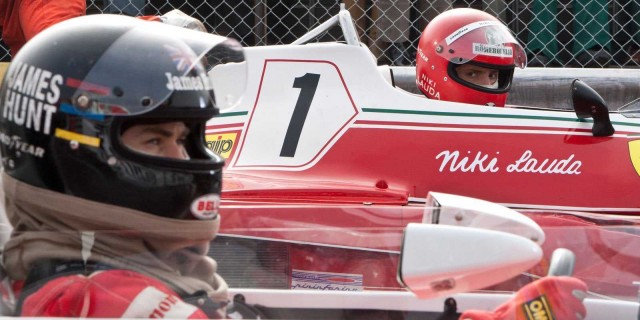 Well, on the casting front, the production team couldn’t have done a hell of a lot better if it had tried. Chris Hemsworth does a fine job of selling himself as Hunt, flashing a mischievous bleep-eating grin at the right times and speaking in a commendably close facsimile of his polished, borderline aristocratic-sounding English accent (which is impressive, considering Hemsworth is as Australian as a vegemite-soaked boomerang). And writer Peter Morgan’s screenplay certainly gave Hemsworth plenty of opportunities to establish Hunt’s hard-driving, hard-partying and hard-loving (Watch for the scene where he wakes up in a hotel bed with a pair of feminine feet poking out from the covers on either side of him…on the morning of the title-deciding race.) personality for the audience.

However, it’s Daniel Brühl’s turn as Lauda that has been grabbing the headlines, and rightly so. Unlike his Antipodean costar, Spanish-German actor Brühl was able to spend time with the man he’s playing (The real James Hunt died of a heart attack 20 years ago.), and it shows. The speech patterns, the physical mannerisms, the personality…everything points back to the Austrian ace. And Brühl arguably had the tougher of the two lead roles, playing the abrasive, socially-awkward and narrow-focused straight man against the jolly and gregarious pseudo-clown (by comparison) part with which Hemsworth was tasked. Leading ladies Olivia Wilde(below) and Alexandra Maria Lara serve as the on-screen wives of Hemsworth and Brühl, respectively, and while both deliver fine performances (to go with their fine looks), it would be a stretch to call either’s efforts a “breakout.” 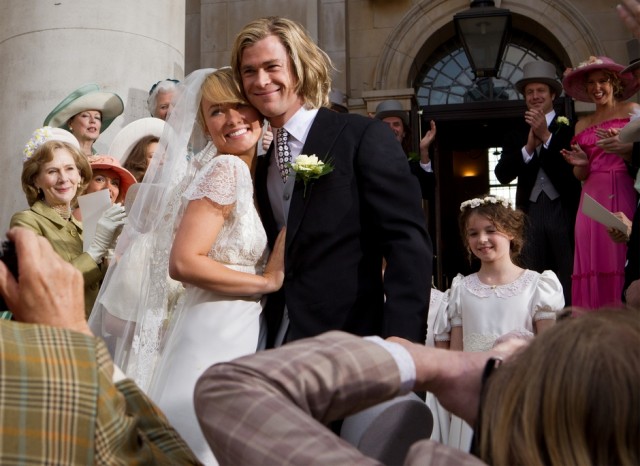 And there’s nothing necessarily wrong with that, as the racing action and the Hunt/Lauda rivalry are the main, er, drivers of the storyline. From their first encounter in Formula 3 in 1970 to the climactic (and climatic) 1976 Japanese Grand Prix, the on-track action is intense and frantically-paced, shot in immersive camera angles and stitched together in cuts just long enough for you to realize what’s going on. The superb audio only deepens the sense of immersion, with the sound crew having sampled real Ferrari flat-12s, Ford-Cosworth V8s, BRM V12s and so on, plus a stellar soundtrack comprised of instrumental originals from film-scoring god Hans Zimmer and period rock hits from the likes of the Spencer Davis Group, Thin Lizzy and David Bowie. All in all, you feel like you’re right in the middle of the glamour, excitement and danger of Formula 1 in the mid-‘70s. 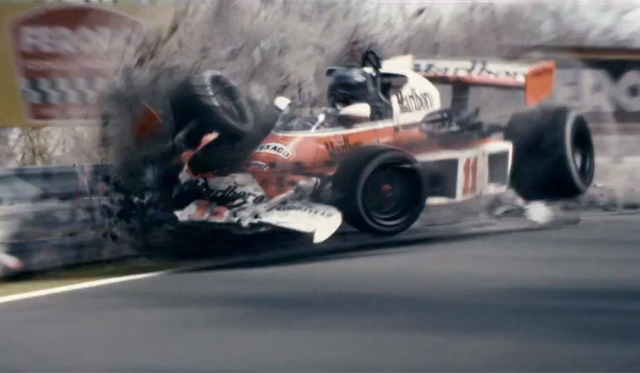 It is that element of danger that is the subject of numerous reminders to both the cast and the audience. The graphic aftermath of the crash that claimed Tyrrell rising star Francois Cevert (His name is never mentioned, though the car, track, year and other details line up perfectly.) is certainly sobering, but Lauda’s fiery shunt at the Nürburgring (We refuse to acknowledge any “Dude, spoiler alert!” moaning; it’s in every damn trailer.) absolutely drives the point home. Howard and company shot the crash sequence at the actual Bergwerk corner on the actual Nürburgring Nordschleife from almost the exact same place on the hill where the infamous home movie of the real accident was shot (In fact, that real footage is played on a TV shortly afterward.) The attention to detail and accuracy is chilling enough, but the shots from the driver’s seat of the shattered Ferrari 312T2, with flames almost completely covering the screen as the muffled, desperate shouts of Lauda’s fellow drivers and corner workers are nearly drowned out by the roar of the inferno and some truly stomach-turning wheezing and gagging sounds signifying the severe burns rendered to the inside of Lauda’s lungs takes the whole scene to another level. You’ll absolutely get an appreciation for just how close he came to being barbecued alive, inside and out.

And you’ll also get an appreciation for the hell Lauda went through after the crash, whether you like it or not. The treatments of his injuries are plenty hard to watch, but seeing (and hearing) him struggle to slide a helmet over his raw, disfigured head is almost too much. Brühl and the makeup artists earned their money with this one.

It sounds like we really loved Rush, doesn’t it? Well yes, we did. But we aren’t bereft of complaints. While the use of CGI certainly helps recreate the look and feel of some tracks that have been altered beyond recognition or shut down altogether since 1976, serious racing fans like us will be bothered by areas of what are obviously Brands Hatch and Caldwell Park being used as stand-ins for the likes of Paul Ricard and Monza. Furthermore, many of the CGI crashes and spins are easy to spot, which can lead to further distraction. Also, we would have loved to see Hunt’s good buddy and partner in debauchery, motorcycle racing champion Barry Sheene, represented, and wouldn’t have minded having another half-hour to squeeze in more on and off track action.

However, we guess our biggest bone to pick with Rush is the treatment of the two protagonists’ (Yes, we said two protagonists, because by the end of the movie it’s hard to pick which one to root for.) relationship. In the film, the characters respect each other as drivers but both are generally annoyed by the other as a person; in reality, Lauda and Hunt were, by most accounts, rather good friends. Yes, we realize the rivalry aspect pretty much had to be inflated to grab and retain viewer interest, but it just bugs us. At least a particular scene after Lauda’s accident involving Hunt, a journalist and a tape recorder (as well as the final few seconds before the end credits) make it clear that these two were hardly in Senna/Prost territory in terms of mutual disdain (Now that rivalry would make for a great movie…). 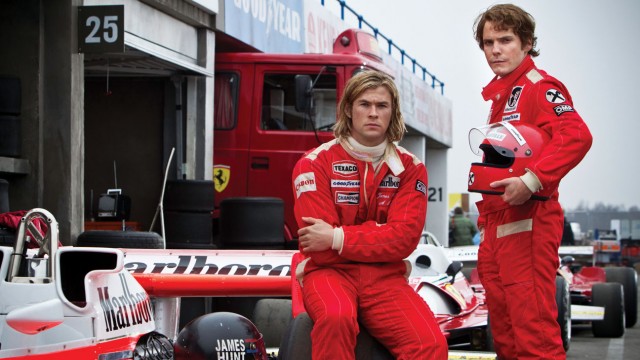 All things considered, Rush is terrific. It’s clear that Ron Howard and everyone else involved in this project treated it as a labor of love, and wanted it to be as faithful as reasonably possible to the historic events on which it is based. While your non car/motorsports geek friends, family and significant others might get lost in the racing sequences and other specialized minutiae, their perseverance will be rewarded with some enthralling character development, both positive and negative. And for those of us who do worship at the altar of internal combustion, it’s probably the most accurate, polished and well-rounded non-documentary racing movie ever made, and absolutely belongs on the same lofty pedestal as Grand Prix, Le Mans and Winning. If you haven’t seen it yet, get thee to a theater sooner rather than later.