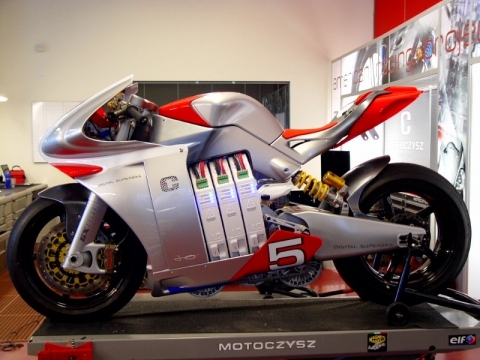 The MotoCzysz E1pc has been branded as the world’s first “Digital Superbike.” According to founder Michael Czysz, this bike can accelerate to 120 mph in just “seven or eight seconds.” That’s basically as fast as the 2009 Suzuki GSX-R1000, but with zero emissions!

The E1pc incorporates 10 battery packs and 3 motors as the power source. It also garners chassis and suspension knowledge from the original research done for MotoCzysz’s now defunct MotoGP project. This might very well be the fastest electric motorcycle ever made. Time will tell whether it can dethrown the current champ, the Mission One with it’s 150 mph top speed. 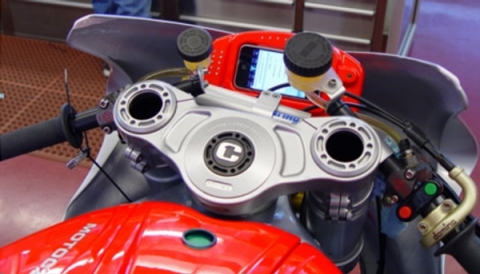 Not only is this an amazing high-tech bike but it is very progressive and novel as well. We all know the iPhone has outstanding capabilities. But now we’ve seen a first— the MotoCzysz E1pc uses the iPhone for all of its instrumentation. We don’t know the details yet on how it’s integrated or what the features and functionality are, but we can assume that it relies on the iPhone’s GPS and accelerometers to provide feedback. Things like location, speed, lateral G’s should a piece of cake for this electric superbike. Just think, with the Dynolicious app built in, performance metrics and baselining should be available by default on every run!