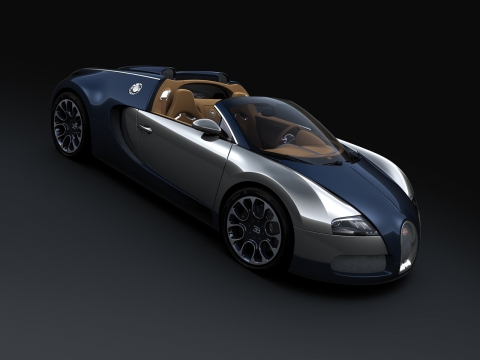 The Bugatti Veyron has had its fair share of special editions including the Pur Sang, Sang Noir, Bleu Centenaire, Fbg Par Hermès along with aftermarket creations like the Linea Vincerò by Mansory. There have also been many other one-off custom jobs sanctioned by high rollers in the Middle East. But the Grand Sport, which is the new targa-top model of the Veyron, has, until now, been left out of the unique variations game. However, debuting at Pebble Beach this weekend during Monterey Car Week, the Bugatti Veyron Grand Sport “Sang Bleu” will be unleashed on the world. This is fitting since the original Grand Sport (chassis 001) was unveiled at the Concours d’Elegance last year. It then went to auction by Gooding & Company and sold for $2.9 million.

The “Sang Bleu” is distinguishable by its two-tone color scheme, which you may notice, looks quite different than your run-of-the-mill metaliic paint jobs. The area that appears sort of like a high-gloss silver is actually not paint at all but polished aluminum. And the darker areas are, amazingly enough, a royal blue carbon fiber application. For a little bit of dramatic flair, the rear air scoops have the same nightblue color as well. The other differences between this version and the standard Grand Sport model are the new rims (highlighted with Midnight Blue and Diamond Cut two tone finish) and the interior, which is trimmed in a newly developed Gaucho leather.

Just for a little background info, the regular Bugatti Veyron Grand Sport has two removable tops. One is a hard targa-style top and the second is a temporary roof that resembles the umbrellas held by classic Bugatti race car drivers. Using the soft top, the vehicle is limited to a top speed of only 228 mph. (Aww shucks….) However, when the hardtop is locked in place, the Grand Sport can hit 254 mph, which is the same top end as the regular coupe. This is accomplished by extensive reinforcements and lots of carbon-fiber to keep weight down.

So, how rare is the new Grand Sport “Sang Bleu” in the world of Bugatti? Well, it may actually be one of the rarest. Since only about 20 Grand Sports have been ordered so far and many less actually built and delivered, this platform is already pretty scarce in the marketplace. And since Bugatti has not mentioned anything about a limited production run of the “Sang Bleu”, this may be a one-off creation that is purely event driven for Pebble Beach. In any case, Bugatti has never been one to shy away from someone carrying a briefcase full of bearer bonds, so seeing more of these built is probably not out of the question.