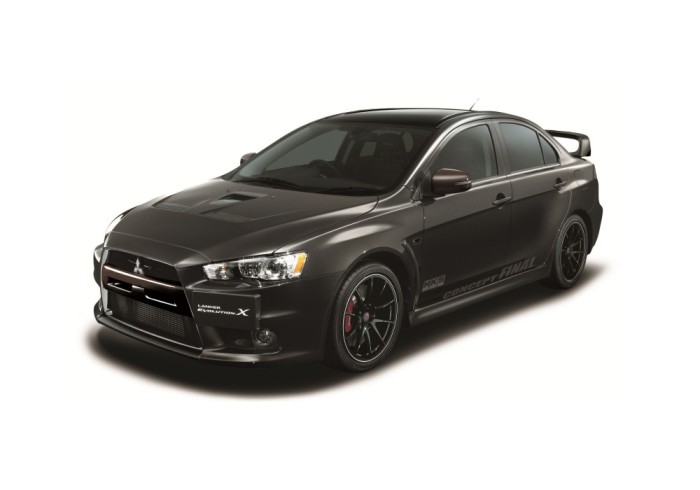 While Subaru has been continuously refining and enhancing the WRX and WRX STI over the years, longtime rival Mitsubishi has left its Lancer Evolution X pretty much untouched since its model year 2008 introduction. A lot of that neglect is probably down to the company’s continuing sales race struggles (particularly here in the U.S.), but we also suspect that the automotive arm of the Japanese industrial conglomerate has simply lost interest in building performance cars. In any case, the 2015 model year will be the last for the current Evo and, it is widely believed, the last for the long, proud, rally-ready junior super sedan line that dates back to 1992.

But don’t think that Mitsubishi is going to let the Evo X go away quietly; just last month one of the chaps in charge of the company’s U.S. operations, Don Swearingen, confirmed that a hardcore, pumped-up, 5-speed-manual-only farewell version of the four-door fireball will arrive in June. Now the home office has revealed a hot dog concept car called the LancerEvolution X Concept Final ahead of next month’s Tokyo Auto Salon, the annual Pacific Rim tuner extravaganza. It doesn’t look that special from the outside (with 19” Rays wheels and an HKS suspension kit being the only noteworthy additions), but it’s definitely special under the hood: The turbocharged 2.0L inline-four has been treated to a reprogrammed ECU and a larger HKS turbocharger, resulting in a jump from 291 to 473 horsepower. We’re guessing the USDM special edition won’t be nearly that potent (We’d guess its output will be somewhere between 300 and 325 horsepower.), but the Lancer Evolution X Concept Final does a dandy job of illustrating how massive improvements can be made with a few simple bolt-ons.