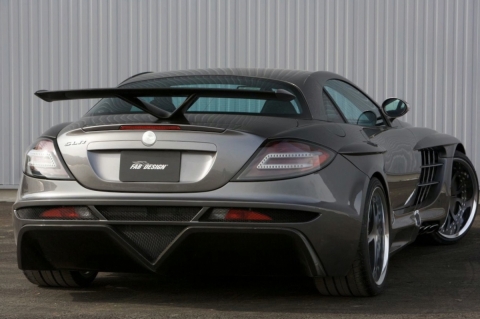 FAB Design is a small tuning shop operating out of Switzerland that focuses on aftermarket modifications for the Mercedes-Benz product lineup. They offer aero kits, wheels, suspension and brake systems as well as engine tuning. They have now put their performance and design know-how to the test by modifying the top dog, the Mercedes-Benz SLR McLaren. But despite its dainty name — FAB Design SLR Desire — this is a mean car which is anything but delicate and demure. Horsepower has been boosted from 626 hp to 750 hp which puts it in the 3.6 second range for 0 to 62 mph sprint with a top speed of 196 mph. FAB design has limited production to 15 units, and since its debut at the Geneva Motor Show, all have been scooped up.

More power equals more aerodynamic tweaks. The FAB Design SLR Desire has a carbon body that rivals the technology and engineering put into F1 as well as the space program. A custom front end with a revised apron and reshaped hood give it a new look. The side skirting has been changed along with flared fenders to add significant width. The exhaust pipes have the same exit point on the sides, but now number three instead of just two. The backside of the car is the most radical adjustment we’ve seen to date. A new massive diffuser and rear wing spoiler serve to reduce lift force and increase downforce working in tandem. FAB Design’s own sports suspension was installed along with the addition of the company’s 20″ wheels with Michellin 265/30ZR20 tires in front and 325/25/ZR20 tires in rear. Inside, black FAB Design leather is upholstered throughout with red stitching and croco-style seats. 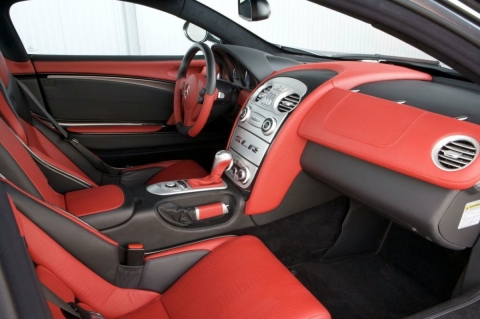 Ok, so it’s not exactly pretty and ‘Desire’ isn’t a word that readily comes to mind when you see FAB Design’s new creation, but the effort is a solid one never-the-less. The engine tweaks as well as suspension system upgrades should result in a nice bump in performance. Personally, I dig the two-tone Mansory SLR Renovatio which does just fine without a crazy wing. And if I had to get a little more aggro I would go with the Mercedes-Benz McLaren SLR 722 GT from TRG Motorsports. Ahh, decisions, decisions…