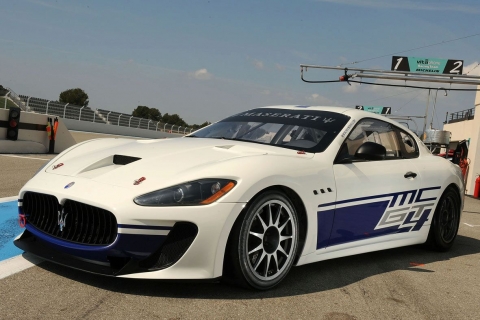 Maserati recently issued a press release announcing the official unveiling of the new GranTurismo MC during media days for FIA GT at the Paul Ricard Circuit. And today we have some video to showcase Maserati’s new racer at the track. This model is derived from the Maserati GranTurismo MC Concept that was previewed last September. Maserati will be offering a limited number of these vehicles for drivers wanting to compete in the 2010 GT4 European and national racing series. Those with the financial prowess and racing skills can pick one up in October for 135,000 Euro + VAT through Maserati Corse. The GranTurismo MC was created with GT4 in mind as this series comes closest to their existing production models.

The Maserati GranTurismo MC works off of a 4.7 liter V8 engine putting out 450 hp. It features an electro-actuated transmission with the company’s MC Shift function to reduce gear changes to only 40 milliseconds. Paddle-shifters are provided to work through all 6 gears. To keep weight down the bodywork, shock absorbers, driver’s seat, dashboard and console are all carbon fiber. In order to be FIA race compliant a welded integral rollcage has been installed. Six piston calipers in front and 4 piston calipers in rear slow down the massive 18″ x 11″ wheels. Check out the video after the jump!