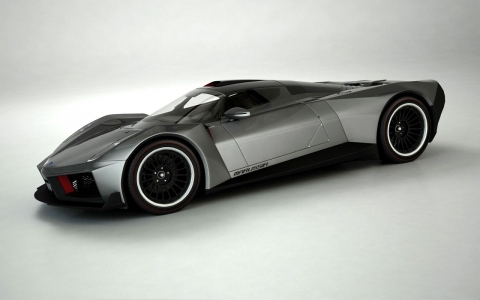 The Frankfurt Auto Show is shaping up to be one of the most exciting and well-stocked auto shows of the decade. Apparently the people of our planet had conflicting New Year’s resolutions a few years ago. Half of the planet promised to build highly fuel-efficient cars, that save the planet, cheap to maintain, practical, and make us all feel like we’re saving the planet without having to actually make out with a tree. The other half got drunk, played 18 hours of Forza 2, and decided it would make the most expensive, opulent, beautiful, and fastest cars the world has ever (and perhaps, will ever) see.

Cars are so fast now that 200mph is no longer the summit of speed, but a Base Camp from which to set out from. A few years ago cars like the SLR and Ferrari Enzo made big waves with engines producing over 600hp. Tomorrow there will be a handful of “normal” exotics with engines producing almost that much power. Lamborghini’s small “daily” supercar makes 560. There will also be cars draped in fine leather, cashmere, and the rarest woods. Koenigsegg even found a way to put tiny pieces of diamonds in their paint, to make the car more reflective in the sunlight. Not exactly a Civic Hybrid…

So the world has gone mad apparently, but to car fans everywhere go the spoils. The 2009 Frankfurt Auto show has too many exciting cars to list, but you can expect a flood of coverage from us over the next two weeks. A hot hatch from Audi, 4-door Lamborghinis, the too-good-to-be-true Fisker Karma, etc. So many great cars are being unveiled, and all the exciting ones fall into one of those two parties; examples of progress in the quest for lean and green, and cars that seem to defy the laws of physics.

But there’s one car showing up that doesn’t seem to have a home, or at least I can’t figure out which category it belongs to; the Marussia B1. What’s a Marussia B1 you ask? No it’s not an old war plane from the 1930s, or a new type of Bingo call. It’s a supercar…sort of.

Details on the B1 are still hard to find, but the components of the concept left me a little confused. Looking at the car, it seems to be going after the growing hypercar market. The design was done by the Nikolai Fomenko, former Le Mans driver and host of Top Gear: Russia. Looking at the pictures it seems to have taken design cues from the Pagani Zonda, but almost with an industrial twist. It’s angular panels reminded me of the Ferrari Enzo. The triangular headlights are a little Murcielago-esque, yet the back is fairly unique. I wouldn’t call it beautiful by any means, but the look conveys a purpose and that is worth something. The Enzo is not the prettiest thing to come out of Italy, but when you look at it you know you can skip the question, “Is it fast?” So ok Zack, maybe it’s a new hyper-car contender out of Russia. Well, not quite. Open the door to look inside and the dash looks more appropriate for a car from iRobot 2. The dash display is completely electronic, it has a built in 350GB hard drive, wireless internet (useable under 120kph), and even a plasma TV. “Sooo that Scuderia has no stereo at all to save weight, but this car enough electronics to keep a Geek Squad employee happy. I’m confused.”

And then we look at the engine choice, the Marussia B1 is going to have a 3.5 Liter, V-6 Hybrid engine. I think hybrid engines have enormous performance potential. The Fisker Karma is the first car to try and “have it’s cake and eat it too” and it’s already achieving impressive performance. But right now, do we know enough about hybrids to make power at the super-car level? I think we’re heading there, but still have a ways to go. And no offense to Russia or Mr. Fomenko, but a hybrid-powered super-car with a Best Buy warehouse in the dash is ambitious. The B1 is shaping up to a serious under-dog, but should be an interesting project to watch this year. And hey, if I can buy a car that looks like an industrial strength Pagani Zonda, and has the capability to surf the internet or watch movies (while parked, of course) I would save a lot of money on rent, because the B1 would have everything you need.

We are all pumped to see what is unveiled in Frankfurt, and to see what amazing cars will be offered to the world in the near future. It looks like both camps will get more than they could ask for. If you want a 4 door car that will go 212mph and get 10 MPG, your wish is granted. If you want a sleek hybrid that has solar panels on the roof and get’s 67MPG, done. To those of us who think the term “automotive enthusiast” is about 9 notches too low on the volume-knob to describe our love of cars, this event may be more exciting than a Halloween-themed New Year’s Eve party at Hugh Heffner’s lovely homestead. Car companies seem more in tune with their audience than ever, and the selection of cool, exciting, and smart cars is growing every day. The only problem now is deciding on what to get…