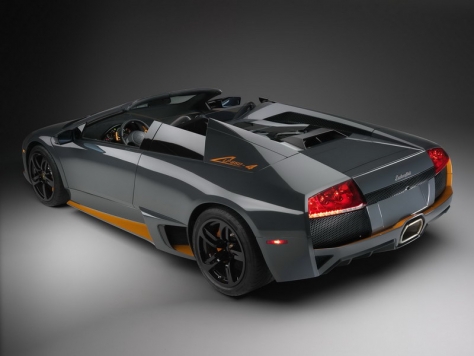 A new limited edition 2009 Lamborghini Murciélago LP 650-4 Roadster is arriving now at select dealers. The company just released the first photographs along with some engine and trim specifics. The powerplant will obviously be the 6.5 litre V12, now bumped up from 640 hp to 650 hp. The all-wheel drive car will be capable of 205 mph and perform 0-62 mph in 3.4 seconds. 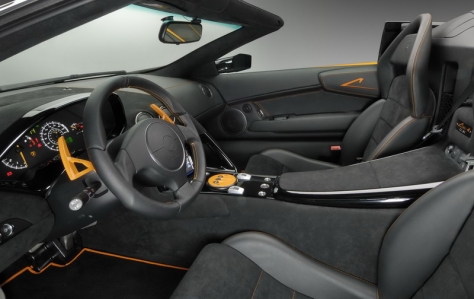 The 2009 LP-650-4 Roadster features a Grigio Telesto (aka LP640 grey) exterior with grey bodywork and bright orange accents including the brake calipers. Just FYI, Telesto is a metallic paint but very subtle. The words Arancio LP 650-4 are featured on the sills and front spoiler. The interior carries over the grey and orange theme with special orange touches throughout. Black Alcantara Nera upholstery is fitted on the driver’s side along with the door panel and central tunnel while black leather Nero Perseus appears on the passenger’s side. Not exactly sure what Nera and Nero Perseus are but they certainly sound cool!

Only 50 units of the 2009 Lamborghini Murciélago LP 650-4 Roadster will be produced at a cost of around $400,000 a piece. If you hadn’t already figured this out, all Lamborghinis are limited edition so don’t feel like you have to rush out the door after reading this. Do the research, pick your model, choose your timing by getting in early and pull trigger! (says the man driving the Acura)