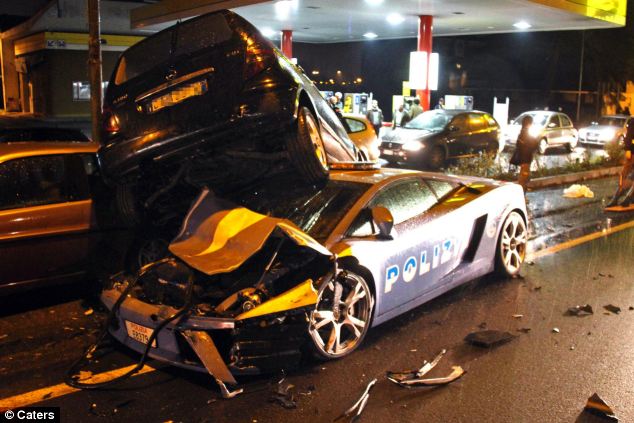 The world’s coolest cop car, a specially modified Lamborghini Gallardo used by the Italian State Police, recently was involved in a serious crash that totaled the exotic patrol vehicle. This raging bull was actually donated by Lamborghini which decked it out with a special package including police decals & lights, a video recording system, gun racks, radio equipment and even a front compartment outfitted to transport body parts to local emergency rooms. It’s actually so cool that I probably wouldn’t even mind getting pulled over.

Strangely enough this crash occurred when the Lamborghini Gallardo police cruiser was returning from a safe driving presentation and exhibition in Cremona, Italy where the car was on display. However, all of the evasive and defensive driving tactics in the world couldn’t save it from an errant Seat Ibiza driver who pulled out of a gas station right in front of the Gallardo, clipping its side. The policeman used the moto “swerve first and ask questions later” which ended up putting the supercar into a row of parked cars. Since the Lamborghini is so low-slung, it actually ended up with a Mercedes-Benz A-Class on top of it. 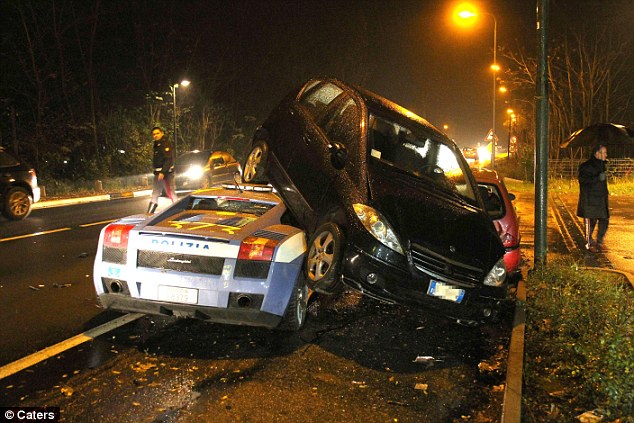 The good news here is that neither the driver nor the passenger were gravely injured and even though the car was pronounced DOA, it is survived by a twin Lamborghini Gallardo Polizia that is doing quite fine. There’s nothing like a $15,000 compact car causing the decimation of a $200,000 supercar.

Only 20 officers of the Italian State Police are authorized and trained to operate the Lamborghini Gallardo LP560-4. For the driver’s sake, hopefully that number hasn’t dropped down to 19. In any case, his peers can’t be too thrilled that their driving time has now been cut in half…