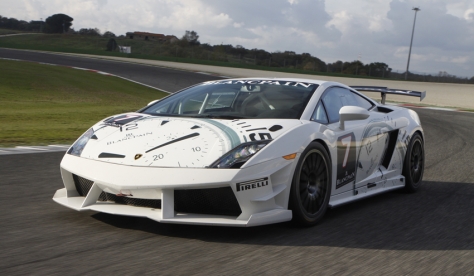 One car racing series are becoming more and more popular these days and Lamborghini has definitely taken notice. So much so, in fact, that on October 25, 2008, they officially announced the creation of the Lamborghini Blancpain Super Trofeo series, with the first race taking place in mid-2009. Today Lamborghini announced that they had successfully completed tests on the Adiana track in Italy, home of the 2nd race of the season, and published some initial results from over 167 miles of laps. Even though further tests and tweaks are required, the fact that the car is more than capable of completing an entire race in its current setup has been confirmed.

So, what is the current setup you ask. The Lamborghni Super Trofeo car is a lightweight variant of the Gallardo LP560-4. The engine is a 5.2L V10 capable of 570 hp controlled by a six-speed robotized gearbox with paddle shifters. The car is 4-wheel drive thereby making it the world’s only AWD racing series. In addition, the car uses steel brakes, a reworked ABS system, 18″ lightweight wheels with Pirelli slicks, a full-roll cage, and an aerodynamic performance kit including a carbon fiber fixed rear wing.

There is an expected race grid of 30 cars for each competition. The race will be open to professional drivers, “Gentleman drivers” aka enthusiasts (with an international competition license) and dealer teams capable of ponying up the €200,000 for the Lamborghini Super Trofeo car. This cost excludes taxes, fees and logistical overhead. The first race will be held on May 3 at Silverstone (UK), followed by Adria (Italy) on May 17, Norisring (Germany) on July 5, Spa (Belgium) on August 2, Circuit de Catalunya (Spain) on September 20 with the final event on October 4 in Monza (Italy).